With near-daily overflights and high-resolution imagery, Planet's constellation of satellites is providing a clear look at some of the fires now burning in the Brazilian Amazon

High-resolution images from satellite company Planet are revealing glimpses of some of the fires currently devastating the Amazon rainforest.

While many of the images currently being shared on social media and by news outlets are from past fires — some from as long as 15 years ago — satellites can provide a near real-time view of what’s unfolding in the Amazon. With near-daily overflights and high-resolution imagery, Planet’s constellation of satellites is providing a clear look at some of the fires now burning in the Brazilian Amazon. 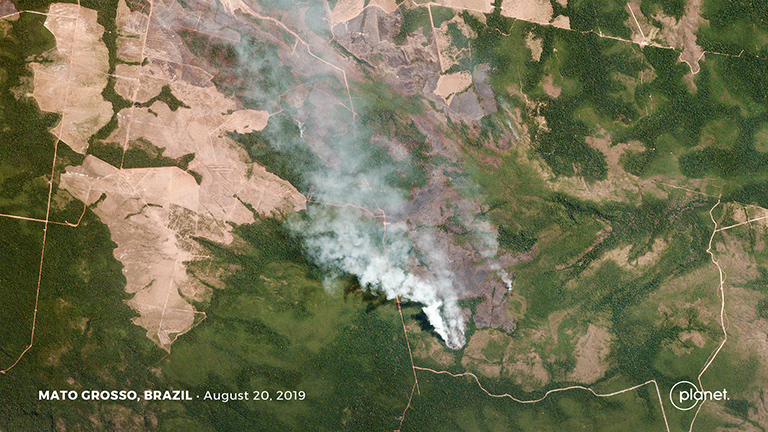 Fires burning on the margins of forest and cleared agricultural areas in the Brazilian state of Mato Grosso on Aug. 20, 2019. Image courtesy of Planet Labs Inc.

Beyond dramatic snapshots, those images also provide data that can be mined for critical insights into what’s happening in the Amazon on a basin-wide scale, according to Greg Asner, the director of the Center for Global Discovery and Conservation Science at Arizona State University, whose team is using Planet’s data to assess the impact of the fires on carbon emissions.

“Planet data provides unprecedented detail in mapping forest change down to individual trees which allows us to assess the damage from these kinds of large scale disturbances,” Asner told Mongabay. “Our Planet Incubator Program is currently tracking forest carbon emissions all over the world — including the Amazon — using Planet Dove and SkySat imagery.

“If you took all of the carbon stored in every tropical forest on Earth and burned it up, you would emit about five times the carbon dioxide into the atmosphere that is already there. The Amazon rainforest represents about half of this forest carbon to give you an idea of how serious this current situation is and the kind of impact it will have on climate change.” 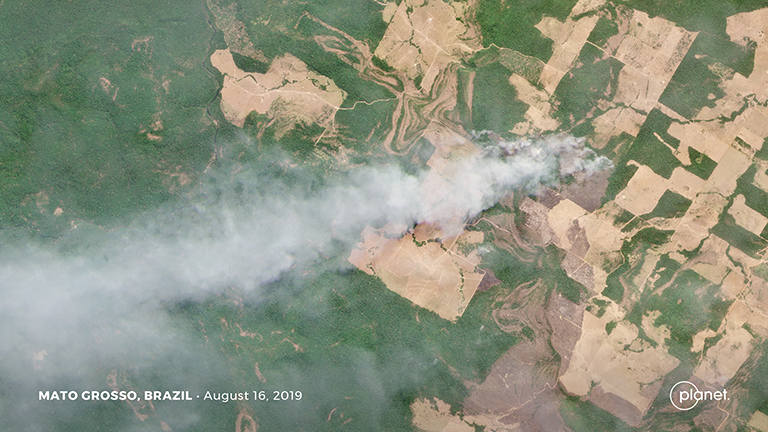 This Planet image shows a fire burning in an area of recent forest clearing in Mato Grosso, Brazil. The utility of Planet’s data has spurred speculation that its constellation could be used by the Brazilian government to replace INPE’s deforestation monitoring system. But Planet has denied negotiating with the Brazilian government on such a plan. Image courtesy of Planet Labs Inc.

Planet wouldn’t comment what the images show specifically, but there are strong indications from other sources that many fires are burning near areas of recent deforestation. Analysis released this week by IPAM Amazônia, a Brazilian research group, shows that the 10 Amazonian municipalities that had the most fire outbreaks this year were also the ones that had the highest deforestation rates.

“These municipalities are responsible for 37 percent of the hotbeds in 2019 and 43 percent of recorded deforestation through July,” states the IPAM report. “This concentration of forest fires in newly deforested areas with mild drought represent a strong indication of the intentional character of the fires.”

In other words, fires are being set to clear lands for agriculture, most likely cattle pasture, which accounts for 70 to 80 percent of forest conversion in the Brazilian Amazon. Typically a landowner will cut and harvest valuable timber trees before slashing and burning the remaining trees. The resulting ash provides a temporary source of nutrients for pasture grass, but the soil degrades quickly without careful management. 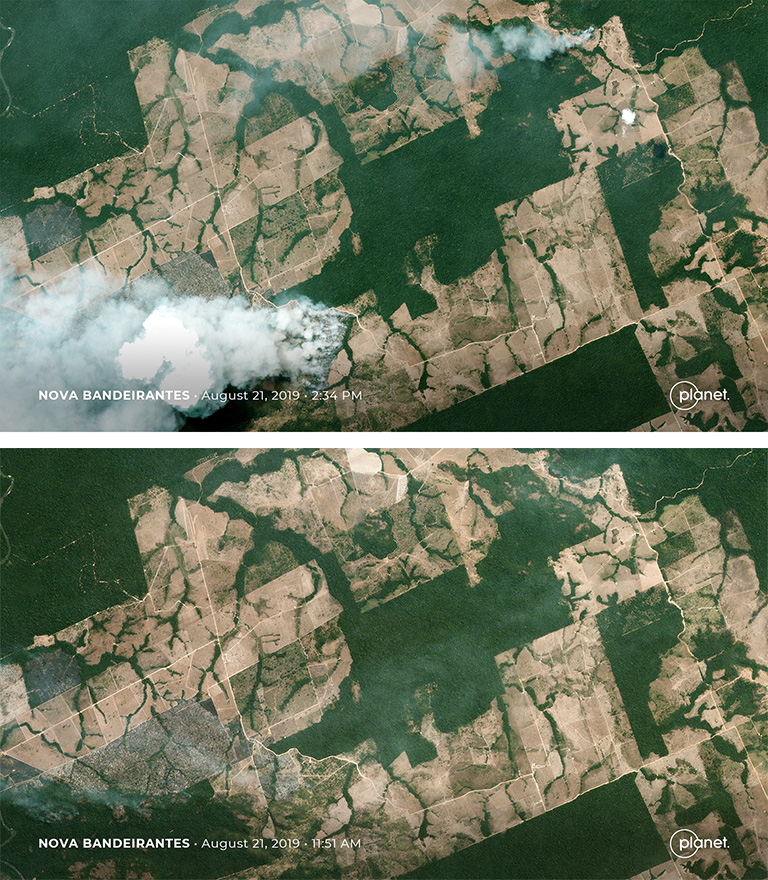 Planet images showing Nova Bandeirantes in Mato Grosso before and after a fire on Aug. 21, 2019. Images courtesy of Planet Labs Inc.

However that may soon change — for the worse.

With climate models forecasting a much hotter Amazon due to rising carbon dioxide concentrations in the atmosphere, a growing chorus of scientists are warning that the combination of continued deforestation and climate change could tip the wet Amazon rainforest toward a much drier, savanna-like ecosystem. Since the trees of the Amazon generate much of region’s precipitation, such a shift could be devastating for the region’s water supplies. The agricultural heartland of South America is predicted to be particularly hard hit by water scarcity, but diminished rainfall would also affect cities’ electricity supplies, which are disproportionately dependent on hydropower. Drier conditions would exacerbate fire and air pollution risk as well. 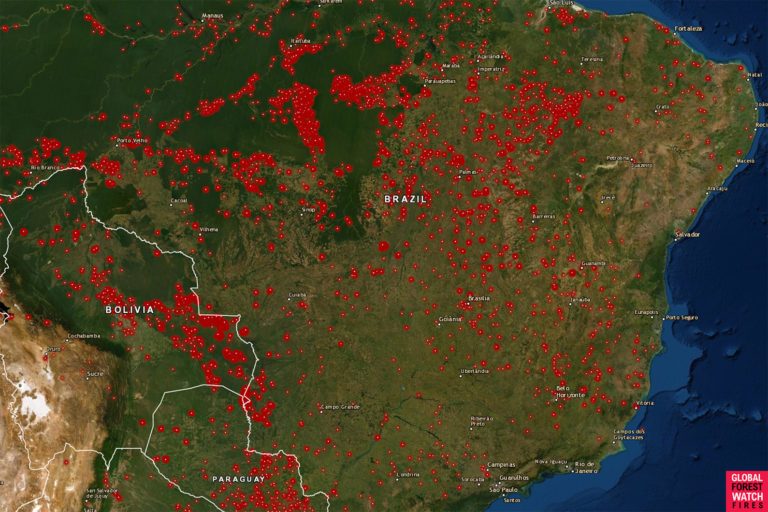 Fires and deforestation up in 2019

Deforestation in the Brazilian Amazon has been trending upward since bottoming out in 2012 at 4,571 square kilometers (1,765 square miles), but the issue didn’t get a lot of public attention until this week, when the skies of São Paulo, one the world’s largest cities, were blackened midday by smoke from the fires. The shocking descent into darkness prompted an outpouring of concern across social media, with the #PrayforAmazonas hashtag garnering more than 300,000 tweets in two days.

But while the fires in the Amazon have indeed increased significantly over last year, they aren’t off the charts relative to the past 20 years. 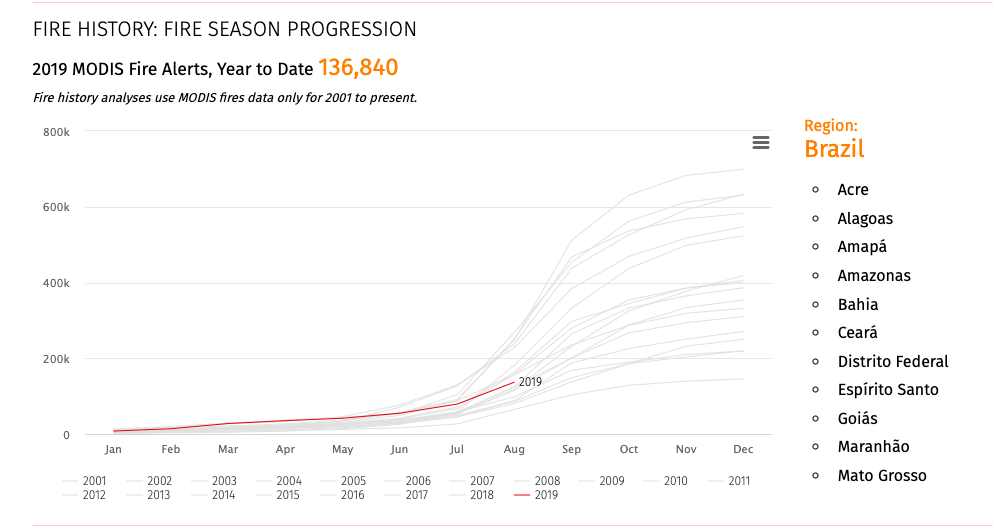 The difference this year is that weather conditions led the smoke from the fires to blanket densely populated urban areas. A similar phenomenon is seen in Southeast Asia: Indonesia’s peat fires get the most attention when winds blow the resulting haze over Singapore, the regional financial hub, as was the case in 2015.

However, to environmentalists worried about the anti-environment rhetoric from President Jair Bolsonaro, the Armageddon-like conditions in São Paulo and sharp rise in deforestation seem be playing out like a worst-case scenario for the Amazon.

According to the country’s national space research institute, INPE, forest loss in the world’s largest rainforest is already pacing 57 percent ahead of last year. And the region is only halfway through the peak deforestation season that runs from May to October. Data from Imazon, a Brazilian NGO that independently tracks deforestation in the Amazon, is expected to confirm the trend when it releases the latest numbers next week. 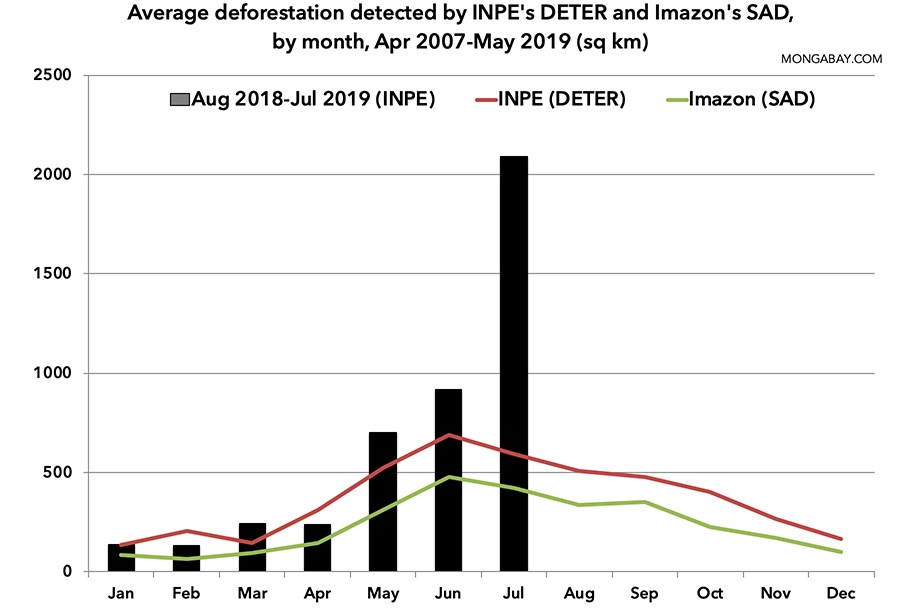 Stung by criticism over rising deforestation, Bolsonaro has asserted INPE is manipulating deforestation data and fired the agency’s director. INPE has not released any deforestation updates since the firing. Bolsonaro also claimed, without evidence, that NGOs are responsible for starting the fires as a fundraising strategy, although he backtracked on those remarks today.

Bolsonaro, however, hasn’t been able to effectively refute the satellite data coming from places like Planet and NASA. Scientists and civil society groups are now poring over that data to look for links between Bolsonaro’s policies — including weakened environmental laws, relaxed law enforcement, and amnesty for illegal deforesters — and what’s happening on the ground in the Amazon.

“While links between Brazilian government policy and these wildfires are unknown, the unprecedented data coming from Planet will allow us to help evaluate the extent to which their policies need to be reexamined,” Asner said.

Tina Smith
I've Made Up My Mind: The US Senate Must Abolish the Filibuster
END_OF_DOCUMENT_TOKEN_TO_BE_REPLACED

Banksy's newest, a two-fer Oscar Wilde tribute and call for prison reform, shows a prisoner climbing down bedsheets ending in a typewriter from Reading Gaol, known for housing Wilde during his two years' hard labor for "gross indecency" - being gay. Video juxtaposes Banky creating it with TV artist Bob Ross burbling about freedom; both are haunted by Wilde's final searing poem about the cruelty and bleakness of life behind bars: "Something was dead in each of us/and what was dead was hope."
Read More...
END_OF_DOCUMENT_TOKEN_TO_BE_REPLACED