From a hotel room in Hong Kong, the systems administrator explains why he leaked NSA documents

NSA whistleblower Edward Snowden in a Hong Kong hotel room during his first recorded interview after revealing himself as the source of a trove of top secret U.S. surveillance programs. (Photo: Laura Poirtras)

Get used to hearing the name of the twenty-nine-year-old systems administrator for the private defense company Booz Allen Hamilton who came forward Sunday as the source behind an explosive series of news stories detailing some of the US government's most far-reaching surveillance programs run by its National Security Agency.

In a video interview conducted by Guardian journalist Glenn Greenwald and released by the British newspaper on Sunday, Snowden confesses to his role as a NSA whistleblower and explains why he decided to risk his livelihood—and possibly his freedom and his life—to reveal to the American public the extent of the programs he once administered.

"I don't want to live in a society that does these sort of things," Snowden explained to Greenwald and his colleague Ewan MacAskill in an extensive question and answer session. "I do not want to live in a world where everything I do and say is recorded. That is not something I am willing to support or live under."

Watch Part I of the interview:

As the Guardian team reported:

Snowden has been working at the National Security Agency for the last four years as an employee of various outside contractors, including Booz Allen and Dell.

The Guardian, after several days of interviews, is revealing his identity at his request. From the moment he decided to disclose numerous top-secret documents to the public, he was determined not to opt for the protection of anonymity. "I have no intention of hiding who I am because I know I have done nothing wrong," he said.

"I don't want to live in a society that does these sort of things." - Ed Snowden

The Washington Post, at his request, also revealed Snowden's identity on Sunday and reported that his motivations stemmed from a desire to expose the growing ‘surveillance state’ in the US. Along with the Guardian, the Post published an explosive report about the existence of a program called PRISM on Thursday, which was based on documents provided by Snowden and showed that the spy agency has the ability to access the online data from the world's largest private internet systems.

“As I advanced and learned the dangerous truth behind the U.S. policies that seek to develop secret, irresistible powers and concentrate them in the hands of an unaccountable few, human weakness haunted me,” Snowden wrote in a note that accompanied the first documents he leaked to the Post. “As I worked in secret to resist them, selfish fear questioned if the stone thrown by a single man could justify the loss of everything he loves."

Snowden said he admires other accused leakers of government secrets, such as Pfc. Bradley E. Manning — who is accused of leaking classified documents to the anti-secrecy group WikiLeaks — but considers himself different.

“I carefully evaluated every single document I disclosed to ensure that each was legitimately in the public interest” he told the Guardian. “There are all sorts of documents that would have made a big impact that I didn’t turn over, because harming people isn’t my goal. Transparency is.”

Greenwald and MacAskill both were active on Twitter following the disclosure of Snowden's identity:

There will be much written about Snowden's confession and his decision in the coming days, but for the moment—and given his ability to do it well—perhaps it's most important to let him speak for himself.

The Q&A between Snowden, Greenwald and MacAskill follows:

Q: Why did you decide to become a whistleblower?

A: "The NSA has built an infrastructure that allows it to intercept almost everything. With this capability, the vast majority of human communications are automatically ingested without targeting. If I wanted to see your emails or your wife's phone, all I have to do is use intercepts. I can get your emails, passwords, phone records, credit cards.

Q: But isn't there a need for surveillance to try to reduce the chances of terrorist attacks such as Boston?

A: "We have to decide why terrorism is a new threat. There has always been terrorism. Boston was a criminal act. It was not about surveillance but good, old-fashioned police work. The police are very good at what they do."

Q: Do you see yourself as another Bradley Manning?

A: "Manning was a classic whistleblower. He was inspired by the public good."

Q: Do you think what you have done is a crime?

A: "We have seen enough criminality on the part of government. It is hypocritical to make this allegation against me. They have narrowed the public sphere of influence."

Q: What do you think is going to happen to you?

Q: What do the leaked documents reveal?

A: "That the NSA routinely lies in response to congressional inquiries about the scope of surveillance in America. I believe that when [senator Ron] Wyden and [senator Mark] Udall asked about the scale of this, they [the NSA] said it did not have the tools to provide an answer. We do have the tools and I have maps showing where people have been scrutinised most. We collect more digital communications from America than we do from the Russians." 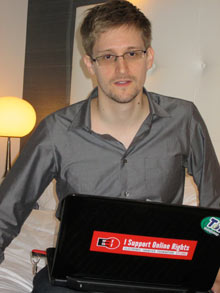 Q: What about the Obama administration's protests about hacking by China?

A: "We hack everyone everywhere. We like to make a distinction between us and the others. But we are in almost every country in the world. We are not at war with these countries."

Q: Is it possible to put security in place to protect against state surveillance?

A: "You are not even aware of what is possible. The extent of their capabilities is horrifying. We can plant bugs in machines. Once you go on the network, I can identify your machine. You will never be safe whatever protections you put in place."

Q: Does your family know you are planning this?

A: "No. My family does not know what is happening … My primary fear is that they will come after my family, my friends, my partner. Anyone I have a relationship with …

I will have to live with that for the rest of my life. I am not going to be able to communicate with them. They [the authorities] will act aggressively against anyone who has known me. That keeps me up at night."

Q: When did you decide to leak the documents?

A: "You see things that may be disturbing. When you see everything you realise that some of these things are abusive. The awareness of wrong-doing builds up. There was not one morning when I woke up [and decided this is it]. It was a natural process.

"A lot of people in 2008 voted for Obama. I did not vote for him. I voted for a third party. But I believed in Obama's promises. I was going to disclose it [but waited because of his election]. He continued with the policies of his predecessor."

Q: What is your reaction to Obama denouncing the leaks on Friday while welcoming a debate on the balance between security and openness?

A: "My immediate reaction was he was having difficulty in defending it himself. He was trying to defend the unjustifiable and he knew it."

Q: What about the response in general to the disclosures?

A: "I have been surprised and pleased to see the public has reacted so strongly in defence of these rights that are being suppressed in the name of security. It is not like Occupy Wall Street but there is a grassroots movement to take to the streets on July 4 in defence of the Fourth Amendment called Restore The Fourth Amendment and it grew out of Reddit. The response over the internet has been huge and supportive."

Q: Washington-based foreign affairs analyst Steve Clemons said he overheard at the capital's Dulles airport four men discussing an intelligence conference they had just attended. Speaking about the leaks, one of them said, according to Clemons, that both the reporter and leaker should be "disappeared". How do you feel about that?

A: "Someone responding to the story said 'real spies do not speak like that'. Well, I am a spy and that is how they talk. Whenever we had a debate in the office on how to handle crimes, they do not defend due process – they defend decisive action. They say it is better to kick someone out of a plane than let these people have a day in court. It is an authoritarian mindset in general."

Q: Do you have a plan in place?

A: "The only thing I can do is sit here and hope the Hong Kong government does not deport me … My predisposition is to seek asylum in a country with shared values. The nation that most encompasses this is Iceland. They stood up for people over internet freedom. I have no idea what my future is going to be.

"They could put out an Interpol note. But I don't think I have committed a crime outside the domain of the US. I think it will be clearly shown to be political in nature."

Q: Do you think you are probably going to end up in prison?

A: "I could not do this without accepting the risk of prison. You can't come up against the world's most powerful intelligence agencies and not accept the risk. If they want to get you, over time they will."

Q: How to you feel now, almost a week after the first leak?

A: "I think the sense of outrage that has been expressed is justified. It has given me hope that, no matter what happens to me, the outcome will be positive for America. I do not expect to see home again, though that is what I want."

Why the Pentagon Budget Keeps Rising

In the latest manifestation of a savage Gaza strategy they call "mowing the grass," Israel has killed from the aloof air at least 212 Palestinians. They include 61 children, 36 women, two doctors, 10 members of one family, 17 of another from age six months to 84 years, and Ahmed al-Mansi, who'd just posted a loving, heartrending video of going to the market to buy toys to soothe his three "sad" kids, jittery from the bombings. "Don't worry," he says as planes rumble above. "Keep playing."
Read More...
END_OF_DOCUMENT_TOKEN_TO_BE_REPLACED