SUBSCRIBE DONATE
Published on
Friday, March 26, 2021
by
Fairness and Accuracy In Reporting (FAIR)

For the Right and Corporate Media, Border Is 'Political Crisis,' Not Humanitarian Emergency

The people coming to the border are real people, most of them going through a harrowing and dangerous journey to escape even more harrowing situations.

Increasing numbers of migrants are attempting to cross the US/Mexico border, and unaccompanied children and teenagers are exceeding the capacities of government-run detention facilities. The right has declared a crisis, and national corporate media have largely followed suit.

Department of Homeland Security chief Alejandro Mayorkas appeared on five of the six Sunday Beltway talk shows this week, and faced questions straight from the GOP playbook. There are many serious questions to be raised about President Joe Biden’s border and immigration policies, but rather than focus on root causes and highlight the humanitarian crisis—which includes the crisis of not recognizing the right of asylum—Sunday show hosts generally preferred to focus on “messaging” and gin up political controversy. 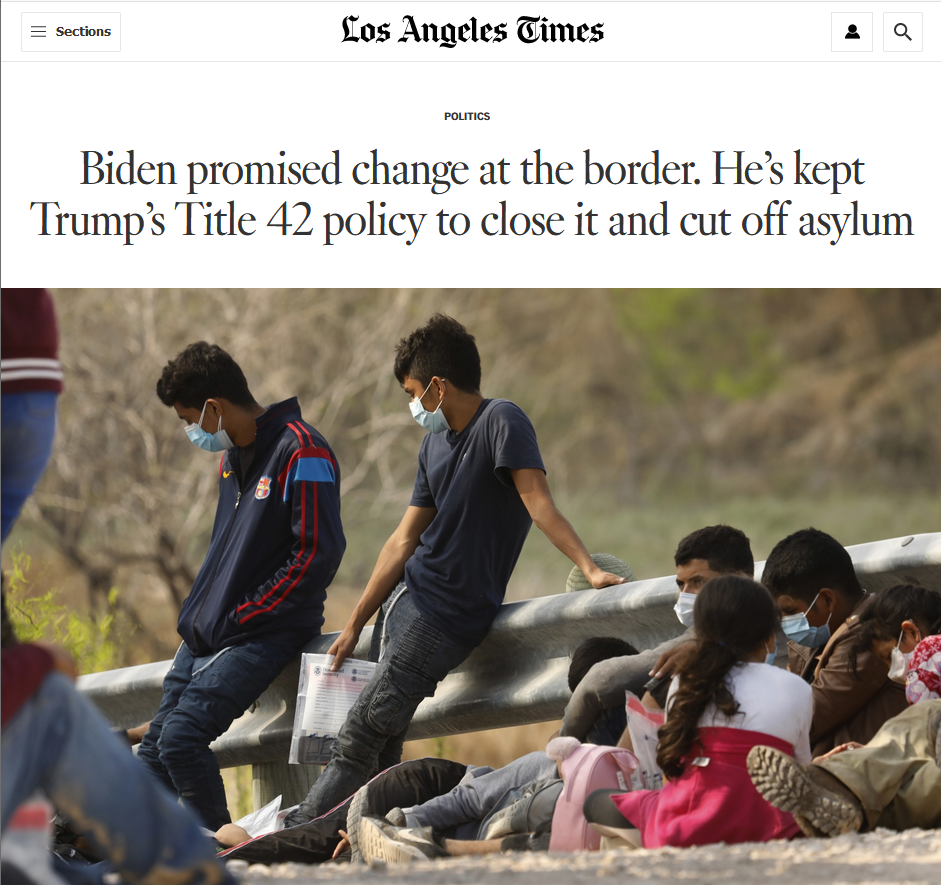 The vast majority of refugees are being expelled from the United States without due process or access to asylum under Title 42, a Trump-era policy that justifies such expulsions based on a public health emergency—in this case, the Covid-19 pandemic—but which experts and several judges have called both illegal and inhumane. As a result, in the past year, fewer than 1% of migrants have been able to seek protection (LA Times, 3/19/21).

Biden has quietly continued Trump’s Title 42 policy for all migrants except unaccompanied youth. That means Border Patrol is simply expelling most of the migrants it encounters, rather than processing them; despite the alarmist rhetoric, the US is not actually facing a capacity issue at the border—except with children (WOLA, 3/17/21). Facilities for those minors—many of which had been shut down by Trump—have become overcrowded as they await processing. It is a humanitarian emergency that the administration claims to be working to resolve, but is currently not allowing press access to the facilities for the media to be able to see conditions and what, if any, progress is being made.

Seeking true answers and solutions rather than ratings would mean highlighting the humanitarian emergency, but also excavating the underlying drivers of increased migration attempts rather than simply trying to turn them into a political football. Poverty and violence in the so-called Northern Triangle—Guatemala, Honduras and El Salvador, where the bulk of migrants at the border originate—has been exacerbated by the pandemic and recent hurricanes (intensified by climate change), but also deeply impacted by US foreign policy.

Current poverty and violence in Central America can’t be understood without recognizing the role of the US in fueling bloody civil wars and aiding repressive regimes in the region for decades. Even after the wars ended, for the past 20 years, instead of focusing on root causes of poverty and violence, the US has attempted to stop migration flows to its southern border primarily through criminalization and militarization; this only escalated during the Trump years (The Nation, 2/16/21; NACLA, 3/7/21). This strategy has done little to stop migration—in fact, by training, funding and arming repressive Central American governments, the US has succeeded in adding to pressures on people to flee, and making the journey itself far more perilous. 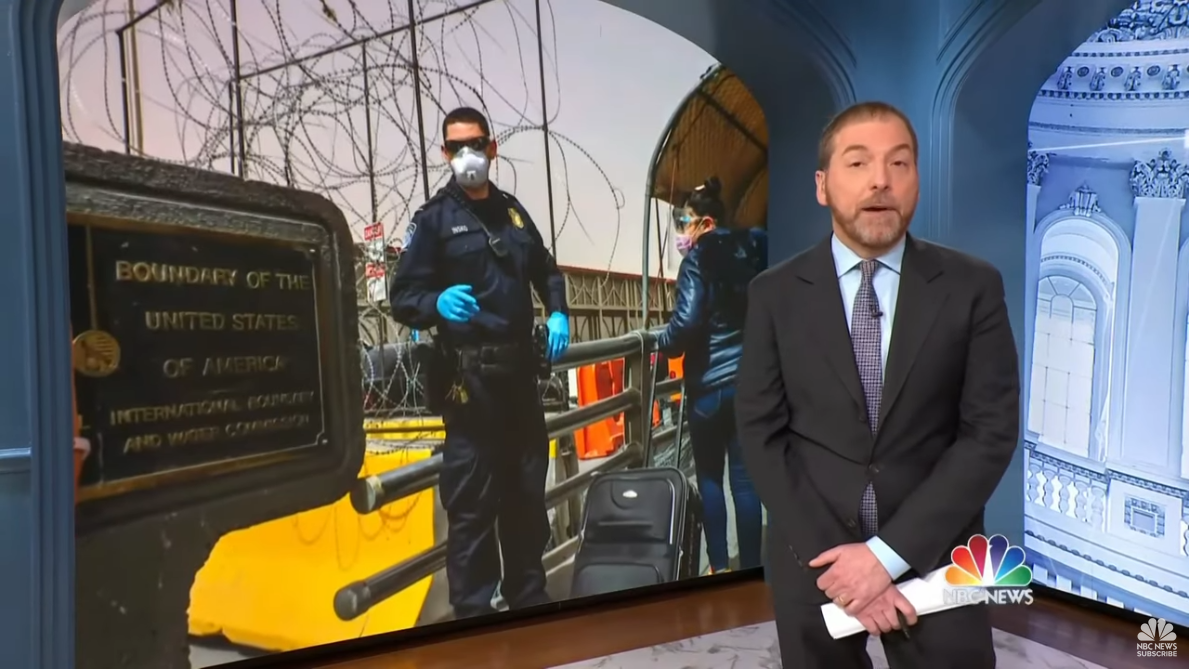 But as Mayorkas made the rounds on the Sunday shows, the hosts stuck to a script based on GOP talking points that emphasized whether the administration’s messaging was driving a border crisis.

It’s fair to call the deteriorating situation at the US/Mexican border a crisis, even if the Biden administration refuses to use that word. But it’s more than that: It’s a political crisis for the new president, with no easy way out.

On ABC‘s This Week (3/21/21), Martha Raddatz similarly introduced the story by focusing on the GOP-generated political controversy, framing it as “an emerging crisis for the Biden presidency.”

So far, Americans largely approve of Mr. Biden’s young presidency, and he wants to focus on vaccinations, Covid relief, infrastructure, voting rights, racial inequities and renewing America’s image at home and abroad. But he can’t control the news cycle…. Events and politics have a way of applying their own pressure points, and right now, that pressure is pointed directly at our southern border.

It’s true, Biden doesn’t control the news cycle: News outlets do. And defining the border situation as a “political crisis” is their way of adopting right-wing talking points that aim at denting Biden’s high approval ratings, rather than at addressing a humanitarian emergency.

Todd launched his questioning of Mayorkas with a focus on the idea that the administration’s policy “sends a message” that the border is open:


Are you concerned that a market efficiency has been created where folks have decided, “Look, my kid’s got a shot at getting in the United States if I don’t go with them?”

He repeated some form of that question two more times. In one instance, while insisting that “I understand on humanitarian grounds,” Todd demanded, “How can you say the border is closed if there is this—what some would look at as a loophole?”

Note that the “loophole” Todd is referring to is the policy of not expelling unaccompanied children at the border without due process. Remember that taking those children to US detention facilities in no way guarantees their successful immigration; many are forced to represent themselves in asylum hearings and, unsurprisingly, fail and are scheduled for deportation—returning them to situations that often include trafficking and abuse.

Minutes later, Todd pivoted to press Mayorkas from the other direction, asking why Title 42 “is still in place.” While it’s an appropriate question to ask, it makes one wonder whether Todd actually “understands” the humanitarian grounds when he questions the humanitarian “loophole” three times more than the greater inhumane policy. 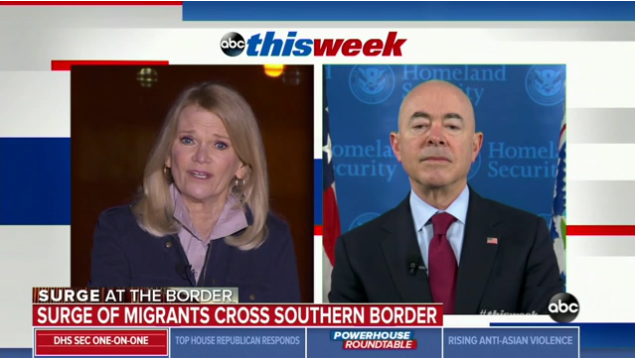 Like Todd, ABC‘s Raddatz (3/21/21) focused her segment on the administration’s messaging. After airing a reported segment that included soundbites from a migrant who claimed “Biden promised that we can cross with minors,” an Arizona sheriff who accused the administration of sending “the message is that this border is open for business and you can come across,” and Raddatz’s assessment that Republican Arizona Gov. Doug Ducey “feels the same,” Raddatz launched her interview of Mayorkas by telling him that the administration’s “messages have been mixed at best.”

CNN‘s Dana Bash, on State of the Union (3/21/21), vaguely alluded to “worsening conditions in Central America” and, to her credit, started with conditions in the border control facilities holding children. But when Bash turned her focus to “the cause of this surge at the border,” the only cause she asked Mayorkas about was the administration’s “messaging” that makes families think “the border will be open for them.”

Todd and Raddatz asked no questions about underlying causes of migration and how the administration is addressing them. Todd did note that Biden

has asked Mexican President López Obrador to do more to solve the problem. On Friday, Mexico announced a crackdown on its border with Guatemala, after the United States announced it will share 2.5 million vaccine doses with Mexico.

But he offered no analysis of that fact, or whether a “crackdown” on the Guatemalan border might be good or bad.

All the shows FAIR looked at did ask about press access. That’s important, but what good can we expect press access to do if the press insists on turning humanitarian issues into partisan politics? 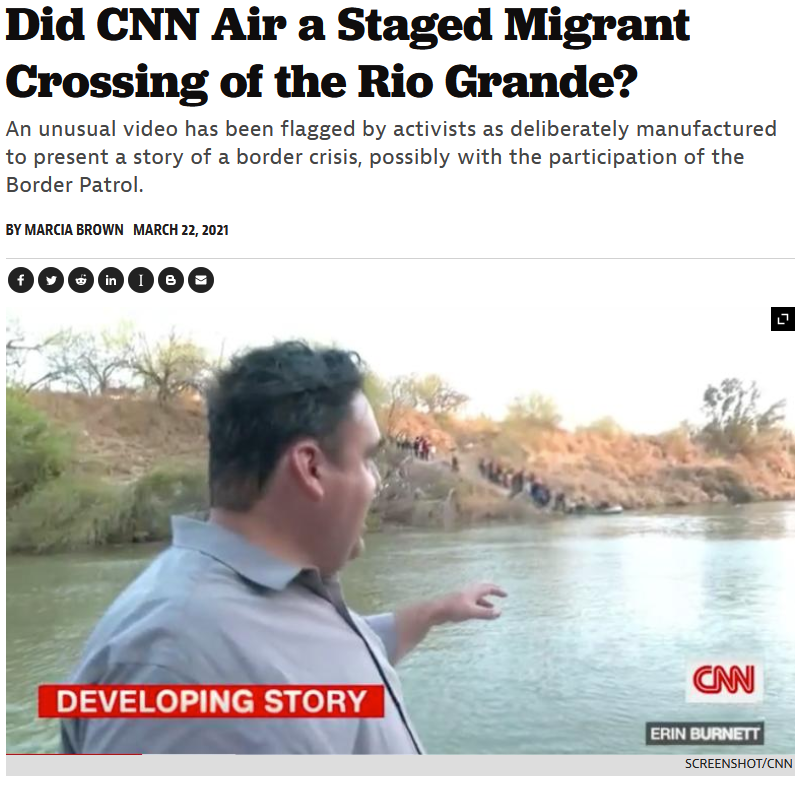 Indeed, corporate media seem eager for ratings-boosting controversy and crisis. In fact, CNN this week was accused of airing a staged migrant border crossing, even after being alerted to the fact that it was “likely fabricated.” As the American Prospect reports (3/22/21):

A similar clip that appears to show the same or a similar trafficking incident from another angle was shared across right-wing media and even linked to on the social media accounts of members of Congress. This clip went viral among immigration opponents, and is helping to fuel the story of an out-of-control border.

The people coming to the border are real people, most of them going through a harrowing and dangerous journey to escape even more harrowing situations. They—and US viewers—deserve a more serious approach to border coverage that examines the real causes and real solutions.

On Earth Day, Climate Justice Alliance Calls on US to Embrace 'Real Solutions' to Planetary Emergency

END_OF_DOCUMENT_TOKEN_TO_BE_REPLACED

Minutes before the Derek Chauvin verdict, a white cop in Columbus, Ohio shot and killed Ma'Khia Bryant, 16, a black girl in foster care who was threatening another girl with a knife. Many details are unclear - it was reportedly Bryant who called police when older girls were attacking her - but goddamn why can't cops disarm a 16-year-old girl without pumping four shots into her chest within seconds of arriving? Just kidding. We know why.
Read More...
END_OF_DOCUMENT_TOKEN_TO_BE_REPLACED