SUBSCRIBE DONATE
Published on
Tuesday, June 09, 2020
by
Fairness and Accuracy In Reporting (FAIR)

Media Are Slowly Starting to Be Serious About Police Violence

Only sustained media attention to such abuses will create the conditions for ongoing calls for justice to be answered.

Though the first weekend of the protests saw fires, looting and unruly activism, media coverage generally lacked any serious analysis of the abusive police conduct. (Photo by Michael Ciaglo/Getty Images) 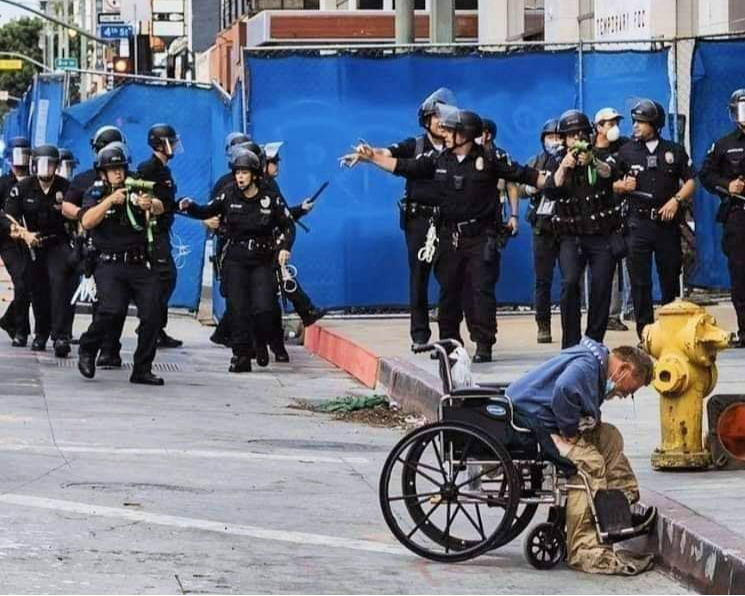 As the George Floyd protests against police violence erupted around the nation, a massive amount of evidence of police brutality was widely captured through social media. Unfortunately,  very little of it made it to mainstream outlets until much later.

For days, Twitter and Facebook were filled with videos of heavily armored police forces indiscriminately pepper-spraying marchers, firing flashbangs at crowds containing children and elderly, and shooting projectiles at people standing outside their own homes. Marchers walked away from protests with all manner of bruises and bleeding wounds, and several lost teeth and even eyes to police projectiles. To many of those immersed in the social media environment, looted or burning buildings seemed relatively unimportant compared to the state violence meted out to the population.

Though the first weekend of the protests saw fires, looting and unruly activism, media coverage generally lacked any serious analysis of the abusive police conduct. Media coverage not only demonized legitimate outrage at a broken system, it whitewashed the role police played in spreading violence and chaos. Since some of the protesters committed destructive acts against property, the assumption seemed to be, none of the protesters had human rights. 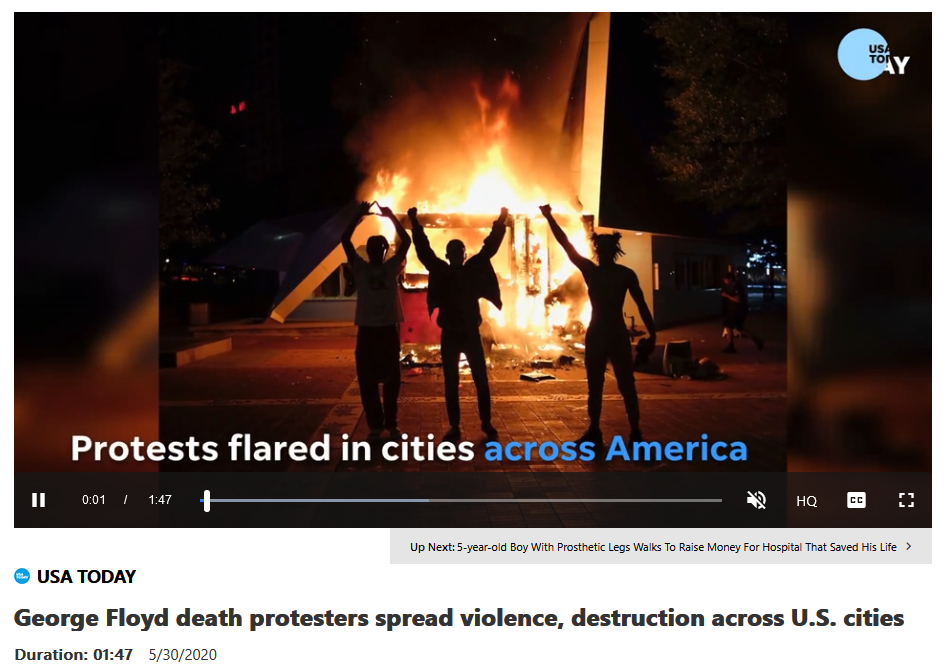 USA Today (5/31/20) ran a piece, “Peaceful Protesters Lament Violence at George Floyd Demonstrations, but Understand the Rage Behind It.” The only violence discussed at length was the vandalism, looting and instances of fires set during protests. The piece briefly mentioned tear gas and arrests, but did not include them in its examination of how police “overreact” to peaceful protesters.

A major New York Times article (5/28/20) described “skirmishes” with police. The language implied a parity between unarmed protesters and heavily armed and armored militarized police. One of the most common terms used to describe police violent incursions into protesters’ space was the benign word “clashes.” 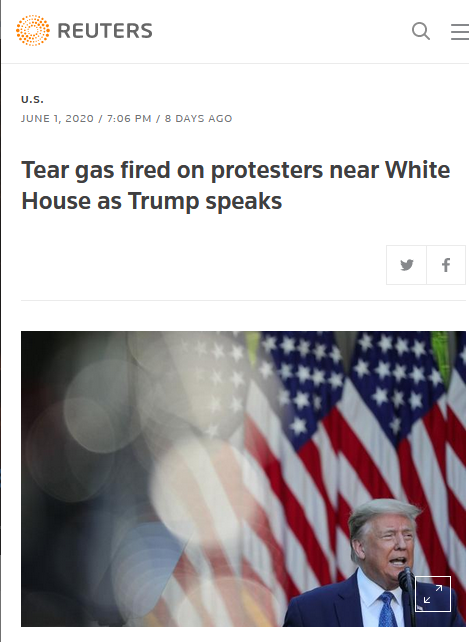 The only case presented involving demonstrators was when protesters outside of the White House chased down and yelled obscenities at a Fox News camera crew as they chased them away. No physical violence occurred other than someone throwing water on the crew. For some reason, this minor incident was included in a long list of police using rubber bullets and arbitrary arrest to subdue reporters.

The Intercept (6/4/20) ran a piece by Trevor Timm of the Freedom of the Press Foundation, which noted that assaults on journalists have come overwhelmingly from police–83% of the time, according to the Foundation’s numbers, not counting dozens of arrests of journalists by police. At least some of the remaining assaults were not by protesters, Timm noted, citing an attack on Philadelphia TV reporter Jon Ehrens by “what appears to be police-aligned white nationalists.”

Slate (5/31/20) was one of the first outlets to focus on police violence as its own phenomenon in a headline “Police Erupt in Violence Nationwide.” This article included some of the ample evidence of police violence widely distributed through social media.

Perhaps the increasingly overt abuses of journalists prompted outlets to be more critical of police. In one high-profile incident, CNN reporter Omar Jimenez and his crew were arrested on live TV despite clearly identifying themselves as press. Another incident saw a local news crew clearly and deliberately targeted with pepper balls by police. These incidents, along with days of massive social media backlash against police violence, likely contributed to the broader refocus on law enforcement abuses over the course of several days. 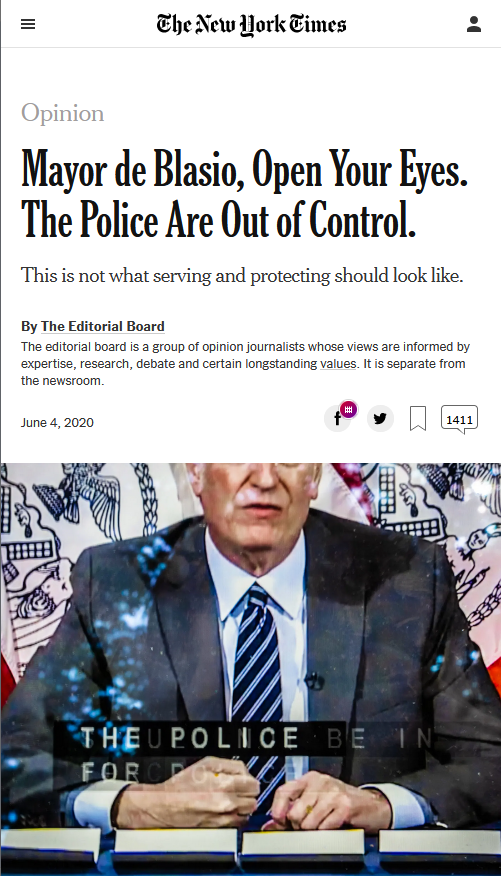 By mid-week, outlets were starting to bring serious attention to police violence. The New York Times (6/4/20) published an editorial headlined “”Mayor de Blasio, Open Your Eyes. The Police Are Out of Control,” with a subhead reading, “This Is Not What Serving and Protecting Should Look Like.” Newsweek (6/4/20) ran a piece centering state violence, headlined “Protest Leaders Largely Calm Amid Unrest as Police Violence Tests Mayors and Governors.” Pieces from the Washington Post (e.g., 6/6/20) also show increased scrutiny of police brutality.

Critical coverage of police tactics has an enormous effect on how elected officials and police officers view abuses by their forces. The threat of negative representation in the media puts pressure on them to seriously address abuses — at least the obvious abuses caught on camera. Even after many mayors indicated that abuses wouldn’t be immediately dealt with early in the week, cracks in that facade are beginning to appear.

On Sunday, a veto-proof majority of the Minneapolis city council pledged to disband the city’s police department, asserting that it can not be reformed. House Democrats on Monday put forth a  bill to address (rather timidly) some complaints about police.

Two officers involved in forcefully knocking down and injuring a 75-year-old man, then lying about it, have been suspended from the Buffalo Police Department. Six Atlanta police were booked on charges involving excessive force after tasing and dragging two college students out of their car; a Philadelphia police commander was charged with aggravated assault for bludgeoning another student in the head. Only sustained media attention to such abuses will create the conditions for ongoing calls for justice to be answered.

Bryce Greene is a student at Indiana University/Bloomington.

The Bloody Catch-22 of Modern Policing In America

Alec Connon
When It Comes to the Climate Crisis, Those Responsible Should Be Held Accountable
END_OF_DOCUMENT_TOKEN_TO_BE_REPLACED
Connect With Us

END_OF_DOCUMENT_TOKEN_TO_BE_REPLACED

In a small, scant step toward justice, Minnesota cop Kim Potter has been charged with manslaughter for killing Daunte Wright at a "traffic stop" - for black Americans, the set-up for "the repeated outcome of an indefensible system that grants immunity for state violence." But Potter remains a bit player in a long harsh story that links Wright to George Floyd's girlfriend, Fred Hampton to Emmett Till, the trauma of every black victim to every black community where, still, nothing has changed.
Read More...
END_OF_DOCUMENT_TOKEN_TO_BE_REPLACED