SUBSCRIBE DONATE
Published on
Saturday, May 30, 2020
by
Fairness and Accuracy In Reporting (FAIR)

It's critically important that media provide accurate reporting on what our governments are choosing to do, and what price we are likely to pay for their choices.

Illinois Is Only State to Meet All Federal Criteria for Reopening, Will Move to Phase 3 on Friday

What was missing from the piece? Any indication that this doesn’t make a damned bit of sense.

“Data from ProPublica shows that Illinois has hit the five main guidelines issued by the White House in order to safely reopen businesses and relax social-distancing protocols,” Newsweek‘s Jeffery Martin reports. He gives the reader no clue that Illinois has one of the worst outbreaks of Covid-19 in the nation—full stop.

With 1,984 new confirmed cases a day (as of May 27, averaged over seven days), it is behind only California in the number of new infections. On a per capita basis, it’s second only to the District of Columbia. It’s adding cases at 20 times the rate that it was when it decided that the virus was spreading so fast it had to shut down its economy.

(And no, Illinois’ outbreak doesn’t look bad just because the state tests a lot: New Mexico, Rhode Island, New York, New Jersey and Louisiana are all testing at a higher rate and finding fewer cases per capita.)

The state now has the third-highest daily death toll, losing (on a seven-day average) 80 people a day; only New York and New Jersey lose more. (Per capita, Illinois’ rate of Covid-19 death is the seventh worst in the nation.)

Honestly, does this look like the one state in the country that is ready to safely reopen? 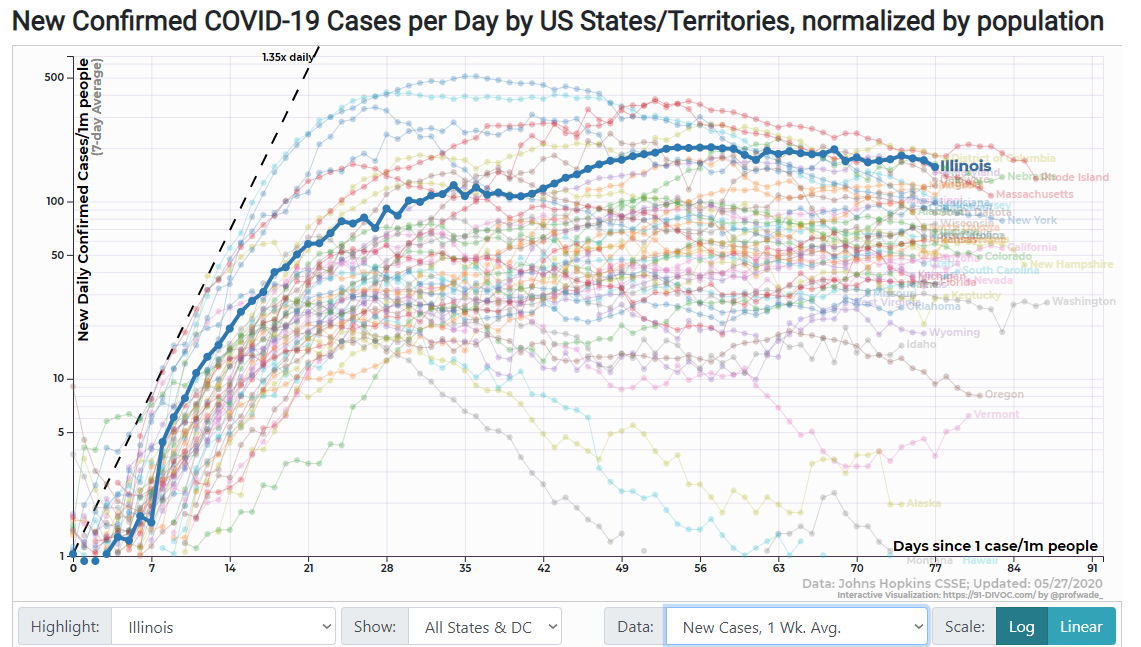 Meanwhile, Newsweek reports that “Alabama, Alaska and West Virginia have only attained passing grades in one out of the five criteria.” As it happens, Alabama and West Virginia are doing a terrible job controlling their coronavirus outbreaks, with daily new cases soaring over the past week. But Alaska continues to be one of the few states or territories that can claim to have actually contained the spread of the virus, with an average of only 1.4 new cases found per day, and no new deaths since May 6. Here’s Alaska’s outbreak compared to Illinois’ on a per capita basis: 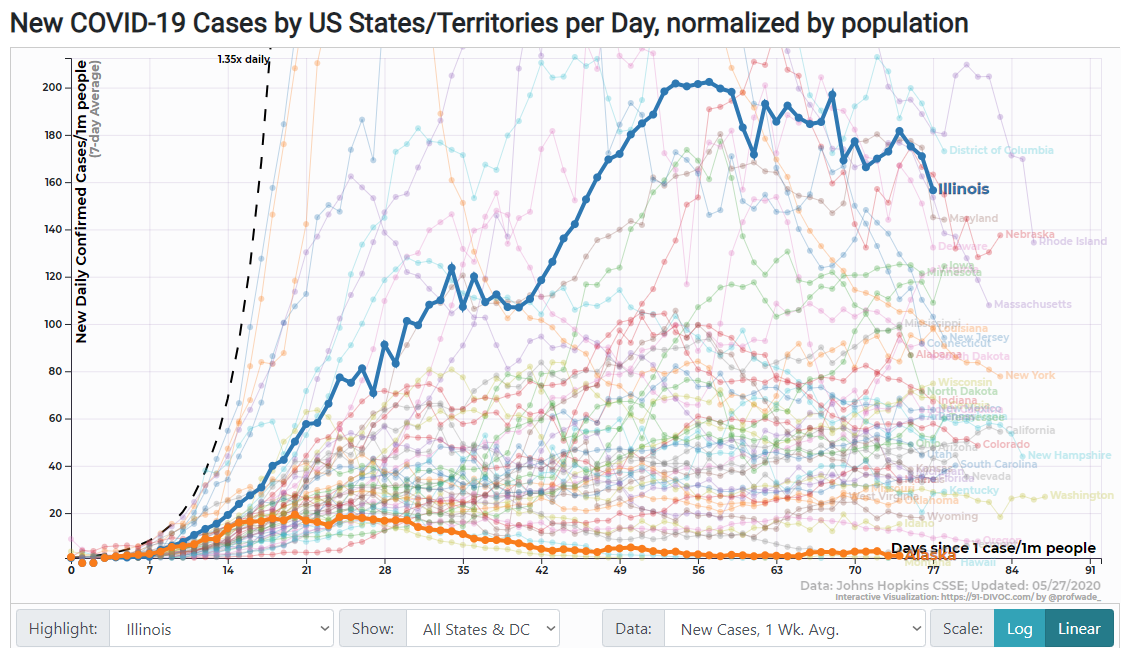 Just so you’re clear: According to the White House, the blue line represents the state that has met the requirements that indicate it is ready to safely reopen—and the yellow line is the state that still has a long way to go.

What this means is that the White House guidelines have absolutely no bearing on whether a state is actually ready to reopen. Illinois met them, Newsweek reports, because:

For two consecutive weeks, Illinois has shown a decrease in positive results per 100,000 people tested. Overall positive test results have also dropped. More than 100,000 individuals per day have received coronavirus tests. Illinois has also had more than 30 percent of ICU beds available while visits to hospitals for flu-like illnesses has decreased.

So if you go from an extremely high rate of coronavirus infection to a merely very high rate, you are making progress and are therefore ready to reopen. You’re giving a lot of tests, which means you are ready to reopen. And you’ve got some empty hospital beds, which is good, because if you rely on criteria like these to tell you that you’re ready to reopen, you’re likely to put a lot more people in the hospital.

These criteria don’t tell you whether you’ve successfully contained the virus; you can virtually stop transmission, as Alaska and a handful of other states have, and still flunk them. That’s because containing the virus is not the plan, and seems to have never been the plan. Instead, the strategy is to allow the virus to spread throughout the population, hopefully at a rate that will keep the healthcare system from completely collapsing.

But the prime objective is to force workers back into the workforce as quickly as possible, regardless of the toll in lives: As Bloomberg (5/19/20) reported on why more stimulus money is not forthcoming, “Republicans are concerned that providing more assistance to states and individuals would slow movement by governors to lift business restrictions.” If carried out, this program would inevitably mean that the 100,000 who have so far been killed by Covid-19 (by the official count) will be a small fraction of the total lives lost.

It’s critically important that media provide accurate reporting on what our governments are choosing to do, and what price we are likely to pay for their choices. Instead, Newsweek is giving us the latest fashion reports on the emperor’s new clothes.

GOP: We Just May Be the Lunatics You’re Looking For

We Don't Have a Labor Shortage in the US, We Have a Crisis of Low Wages
More in:
Rights, U.S.
,
Coronavirus, Donald Trump, Illinois, Media, Journalism, Public Health

END_OF_DOCUMENT_TOKEN_TO_BE_REPLACED

Amidst a brutal Russian crackdown on dissent, 19-year-old Olga Misik - arrested in 2019 for calmly, defiantly reading aloud her country's constitution to a phalanx of glowering riot police at a pro-democracy rally - was just sentenced to two years of parole-like "freedom limitation" for splashing paint at a protest - ie: for "thought crimes." "You know what goes on here," she told the court in a blistering rebuttal. "You wil not suppress the truth."
Read More...
END_OF_DOCUMENT_TOKEN_TO_BE_REPLACED