SUBSCRIBE DONATE
Published on
Friday, May 29, 2020
by
Fairness and Accuracy In Reporting (FAIR)

Coverage of School Reopening Needs to Include School Workers

The eagerness to reopen schools is understandable, but given the intensity of this crisis, the decision must come after a comprehensive review of all factors, which includes the voices of the workers who will be taking on the most risk.

School closures have created some of the most trying ordeals for families in this pandemic. (Photo: carl_hfser/flickr)

When Jennifer Nuzzo, a senior scholar at the Johns Hopkins Center for Health Security, wrote in the New York Times (3/10/20) that K–12 school closures might be unnecessary in the fight against Covid-19, because children rarely get sick from exposure, there was a curious omission. Shouldn’t a scholar of public health, writing about schools for the nation’s leading newspaper, be fully aware that schools are also populated with adults—from teachers to administrators, food workers to therapists? Many of them are in the 45–64 age group that is dying from the coronavirus at a rate about equal to their proportion of the population. Alas, the editors missed this problem.

Versions of this type of oversight have emerged in recent coverage of the debate over whether schools should look to reopen in the summer and fall. The debate has heated up now that President Donald Trump said on Twitter (5/24/20) that schools should reopen. At Fox News (5/25/20), pundit Steve Hilton thundered that schools must reopen, and called general distancing measures meant to stop the spread of the virus  “over-prescriptive regulation” that “is typical of the infantilizing mindset of our technocratic ruling elite.”

Many outlets are failing to reach out to unions representing the workers who will have to incur risks by entering physical school spaces if reopening happens too hastily.

For example, Kevin Drum of Mother Jones (5/23/20) relied on a few medical studies—he admits that “none of this is conclusive proof”—to question whether school closures have any meaningful effect on stopping the spread of Covid-19. His piece includes no input from organizations that represent schools’ personnel, or any mention of the risk to adult school workers. 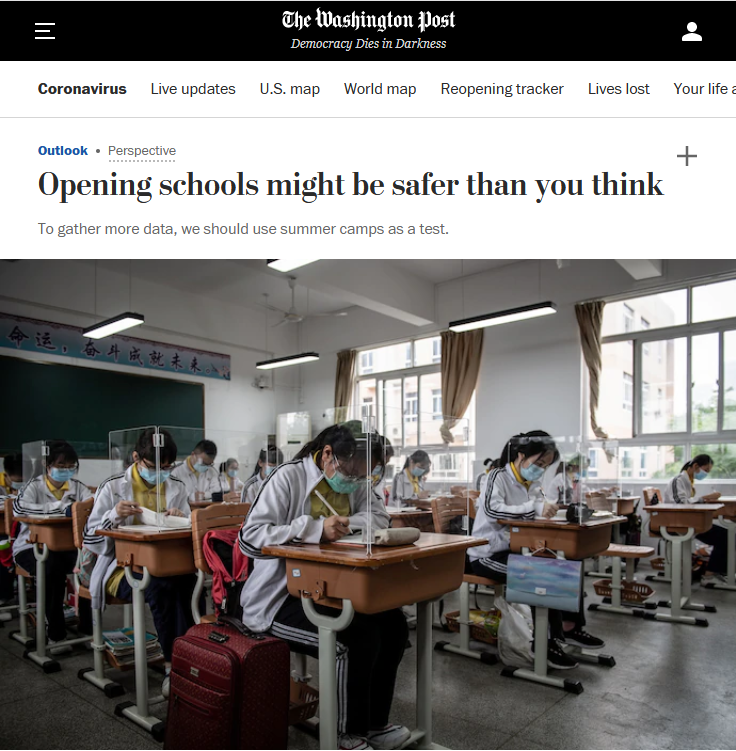 Economist Emily Oster of Brown University wrote in the Washington Post (5/11/20) that schools could have a path to reopening, and, unlike the earlier Times piece, acknowledged that schools involve adult workers who could be open to infection. Still, there was no apparent input from the workers themselves who would be put at risk.

Even Chalkbeat (5/21/20), in its coverage of the possibility of New York schools reopening, didn’t touch the union or worker angle, despite being a source for education news.

The Chicago Sun-Times (5/8/20) did cover the Chicago Teachers Union response to the mayor’s desire to reopen schools. Of course, that uncovered the bitter truth that the union was not consulted by the mayor in her announcement to look for a path to reopening.

The New Yorker (5/24/20) also mentioned the concerns of New York City’s teachers’ union, but it added a telling caveat: “In making reopening decisions, politicians and school officials need to listen to all parties involved. That includes teachers but also families.”

This framing is a false dichotomy that perpetuates the right-wing myth that public-sector unions are organizations competing against parents, rather than worker agents bargaining with city and state government bosses. It’s a mistake to insinuate that teachers and school workers aren’t invested in their schools’ futures like parents are. Not to mention that this dichotomy leaves out the fact that many educational unionists are themselves public-school parents. 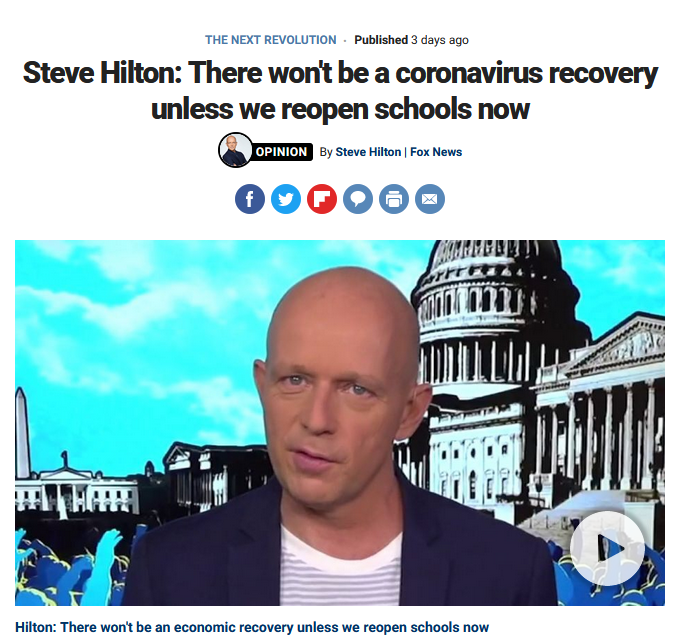 School workers have been one of the hardest hit sectors in the pandemic. New York City’s WABC (5/11/20) reported that at least 74 Board of Education employees have died of Covid-19, and New York City’s United Federation of Teachers has an obituaries page that soberly illustrates how devastating the pandemic has been for educators, putting them alongside New York City transit workers as an occupation that has seen far too much death.

The union angle in this debate is important, because teachers and other workers have the most knowledge about whether school districts have the proper equipment and know-how to prepare for reopening, and can also speak about the hazards and concerns of prolonged remote-learning. A good union keeps an eye on worker safety and health, which in schools often means the safety of students as well.

And re-opened schools don’t just mean the schools themselves could be centers of transmission. Especially in urban areas like hard-hit New York City, thousands of workers would be riding subways and buses, potentially accelerating the spread.

In both the press and in government, many teachers in Covid-19 hotspots don’t feel heard. As Jia Lee, an outspoken UFT activist and New York City special education teacher, told FAIR:

No one, and I mean no one, is asking us how things are going, and what we think is needed to support our students, let alone getting input on what it’ll take to reopen the schools.

School closures have created some of the most trying ordeals for families in this pandemic. Parents are trying to work from home while overseeing remote assignments for their children, which can be frustrating, both technologically and existentially: Can video lessons really recreate the socialization school provides for young children? And teachers are dealing with the same frustrations at the other end of those video sessions, often having to balance their work life with their own parenting and homeschooling.

And schools, in an age of eroding public services for the poor, do serve as an important institution for children in poverty: School is often where these children get meals and medical attention.

The eagerness to reopen schools is understandable, but given the intensity of this crisis, the decision must come after comprehensive review of all factors, which includes the voices of the workers who will be taking on the most risk. And the coverage of that process must include those voices, too.

Jim Hightower
The GOP's Grotesque Response to a Pandemic Will Never Be Forgotten...
END_OF_DOCUMENT_TOKEN_TO_BE_REPLACED

END_OF_DOCUMENT_TOKEN_TO_BE_REPLACED

Wow. The dog whistle's become a fog horn these dark and threatening days with Trump's new re-election merch: An "America First" - whiff of fascism here - t-shirt that looks queasily, uncannily like the Iron Eagle, the symbol of the Nazi Party. " It’s not an accident," wrote Bend the Arc, which also caught the recent concentration-camp-style red triangles. "Bigotry is their entire brand." And yes, there are eagle images - U.S. seal, Marines - that aren't Nazi symbols. This...is.
Read More...
END_OF_DOCUMENT_TOKEN_TO_BE_REPLACED