SUBSCRIBE DONATE
Published on
Friday, August 02, 2019
by
Fairness and Accuracy In Reporting (FAIR)

We desperately need serious, independently run debates, not over-the-top industry-friendly spectacles of the sort put on by CNN—and endorsed and gate-kept by the major parties.

CNN painfully demonstrated this week why we need independently run presidential debates. With its ESPN-like introductions to the candidates, and its insistence on questions that pit candidates against each other, CNN took an approach to the debates more befitting a football game than an exercise in democracy.

The CNN hosts moderated as if they weren’t even listening to what candidates were saying, inflexibly cutting them off after the inevitably too-short 30-to-60-second time limit—in order to offer another, often seemingly randomly selected, candidate the generic prompt, “Your response?” At times, these followed on each other so many times it was unclear what the candidate was even supposed to respond to, or why. 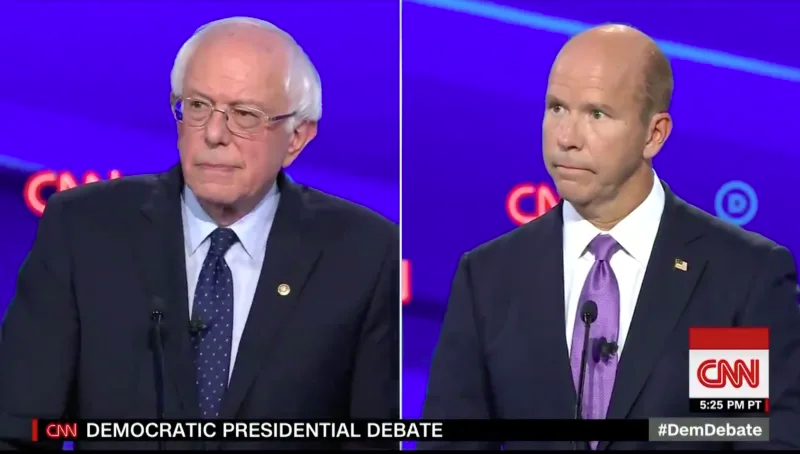 But worse than the entirely unhelpful format was the heavy reliance on right-wing assumptions and talking points to frame the questions. Over the two nights, healthcare dominated the debates; the first night (7/30/19), CNN‘s Jake Tapper kicked off the questions with one to Sen. Bernie Sanders:

You support Medicare for All, which would eventually take private health insurance away from more than 150 million Americans, in exchange for government-sponsored healthcare for everyone. Congressman Delaney just referred to it as bad policy. And previously, he has called the idea “political suicide that will just get President Trump re-elected.” What do you say to Congressman Delaney?

Debate moderators will typically start with top-polling contenders and challenge them to defend their positions. Doing so with attacks from a contender polling below 1%, however, would seem unusual—except that in this case, the candidate unpopular with the public voiced an opinion very popular in corporate media. 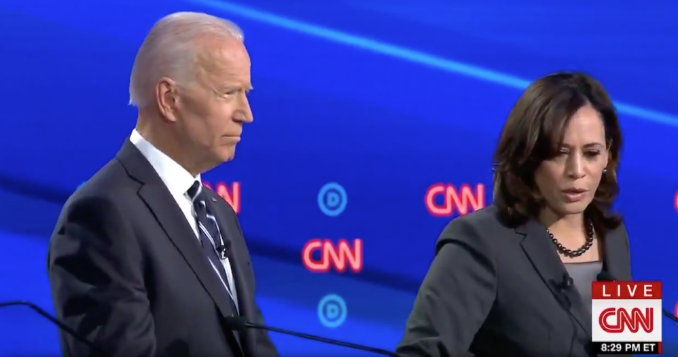 It was a particularly noteworthy tactic, given that the next night (7/31/19), which also started off with healthcare, CNN lobbed the first challenge to Kamala Harris (polling around fourth place) in the form of an attack on her version of Medicare for All from the top-polling Biden campaign—letting the front-runner start off on the offensive.

Tapper queried multiple candidates the first night about raising taxes on “middle-class Americans” to pay for Medicare for All, and when the floor came back to Sanders, he rebuked Tapper: “By the way, the healthcare industry will be advertising tonight, on this program, with that talking point.”

Tapper quickly cut him off, but CNN‘s commercial breaks that night, as observers pointed out, indeed featured healthcare industry ads. In one, the Partnership for America’s Healthcare Future—an industry group—ran an ad talking about how Medicare for All or the public option means “higher taxes or higher premiums; lower-quality care.”

Meanwhile, on the first night, CNN asked more non-policy questions (17)—primarily about whether some Democratic candidates were “moving too far to the left to win the White House”—than questions about the climate crisis (15). Across both nights, the 31 non-policy questions overwhelmed questions on important issues like gun control (11) and women’s rights (7).

The second round of debates may not have enlightened the public much about the candidates, but they made one thing clear: We desperately need serious, independently run debates, not over-the-top industry-friendly spectacles of the sort put on by CNN—and endorsed and gate-kept by the major parties.

(Click to see more comments or to join the conversation)
At Stake?
An existential threat to our democracy. A global pandemic. An unprecedented economic crisis. Our journalism has never been more needed. Can you pitch in today?
DONATE NOW
Goal: 80K
59%
Please Help. We have to raise $33,000 by November 2nd

END_OF_DOCUMENT_TOKEN_TO_BE_REPLACED

In a mind-numbing, butt-freezing, metaphor-rich shitshow in Omaha, the guys who say they want to run the country just failed to run a parking lot after missing buses left thousands of often older rally-goers stranded for hours in frigid temps in search of their cars. Twitter had thoughts: It wouldn't be cold without thermometers, don't let hypothermia dominate your life, it's Obama's fault, and it is what it is: With Trump, you will always end up abandoned in a cold, dark place.
Read More...
END_OF_DOCUMENT_TOKEN_TO_BE_REPLACED