SUBSCRIBE DONATE
Published on
Wednesday, July 31, 2019
by
Fairness and Accuracy In Reporting (FAIR)

Ronald Reagan’s Racism Should Come as No Surprise

The historical amnesia that allows people to be surprised that Ronald Reagan was a racist does more than sanitize the image of a historical figure.

If you imagine that Donald Trump invented the political technique of appealing to white supremacy, you’re going to have a hard time figuring out an effective way to overcome it. (Photo: New York Times)

In the wake of Ronald Reagan being discovered on the Nixon tapes calling African diplomats “monkeys” who are “still uncomfortable wearing shoes,” the Washington Post (7/31/19) quotes Reagan’s biographer saying there was “no hint that the president would hold the kinds of views he conveyed to Nixon.” 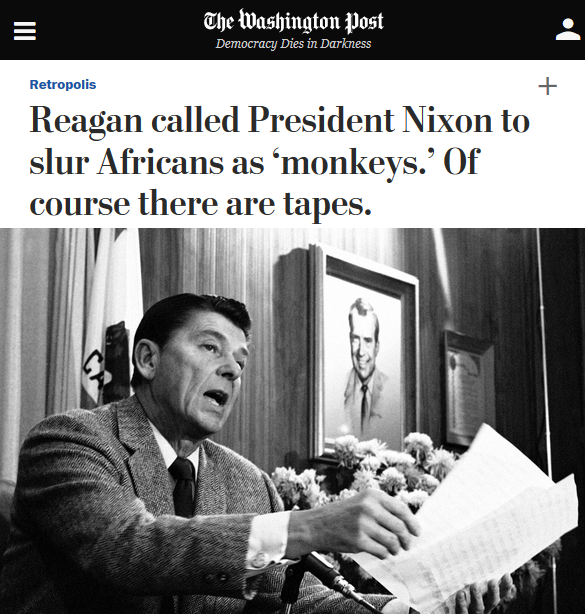 “In all of my very careful research into his private papers, I never found an instance where I felt that Reagan was racist,” claims Robert Spitz, author of Reagan: An American Journey. “Generally when someone says, ‘I don’t have a racist bone in my body,’ I’m instantly skeptical, but in this case, after all my work, I found myself kind of nodding my head.”

Says the Post: “Some of Reagan’s most divisive policies—like embracing the apartheid government of South Africa and inventing the trope of the ‘welfare queen’—may take on a different light now.”

When he went to Philadelphia, Mississippi, in 1980, the town where the civil rights workers had been murdered, and declared that “I believe in states’ rights,” he didn’t mean to signal support for white racists….

When he went on about the welfare queen driving her Cadillac, and kept repeating the story years after it had been debunked…it was all just an innocent mistake.

When, in 1976, he talked about working people angry about the “strapping young buck” using food stamps to buy T-bone steaks at the grocery store…the appearance that Reagan was playing to Southern prejudice was just an innocent mistake….

When Reagan declared in 1980 that the Voting Rights Act had been “humiliating to the South”…when Reagan intervened on the side of Bob Jones University, which was on the verge of losing its tax-exempt status because of its ban on interracial dating…when Reagan fired three members of the Civil Rights Commission…it was all an innocent mistake.

This is far from an exhaustive catalog of Reagan’s race-baiting. When he ran for governor of California in 1966, he declared, “If an individual wants to discriminate against Negroes or others in selling or renting his house, it is his right to do so.” Spitz must have missed that one in all his fruitless search for Reagan’s racist bone.

The historical amnesia that allows people to be surprised that Ronald Reagan was a racist does more than sanitize the image of a historical figure. If you imagine that Donald Trump invented the political technique of appealing to white supremacy, you’re going to have a hard time figuring out an effective way to overcome it.

Benjamin Dangl
Bibles at the Barricades: How the Right Seized Power in Bolivia
END_OF_DOCUMENT_TOKEN_TO_BE_REPLACED
Connect With Us

END_OF_DOCUMENT_TOKEN_TO_BE_REPLACED

As an impeached dumpster fire raves - Twitter was mean to him! Masks mean "social control"! - his abysmal failures have seen us not just hit the grisly milestone of 100,000 deaths but soar right past it: Thursday's toll was 102,794 and rising fast. In response, the Lincoln Project's harrowing new ad savages his "great job" claims with fast-accruing body bags, a chilling echo-chamber of his predicted "close to zero" deaths, and an urgent message: “100,000 dead Americans. One wrong president.”
Read More...
END_OF_DOCUMENT_TOKEN_TO_BE_REPLACED