SUBSCRIBE DONATE
Published on
Tuesday, June 11, 2019
by
Fairness and Accuracy In Reporting (FAIR)

According to NYT, 'Relentless Flooding' in Midwest Just Happens

The New York Times’ 2,400+ word report (6/3/19) by Julie Bosman, Julie Turkewitz and Timothy Williams on the historic flooding in the Midwest—amidst the wettest 12 months ever since recording began 124 years ago—is an illustrative example of how not to do disaster coverage. 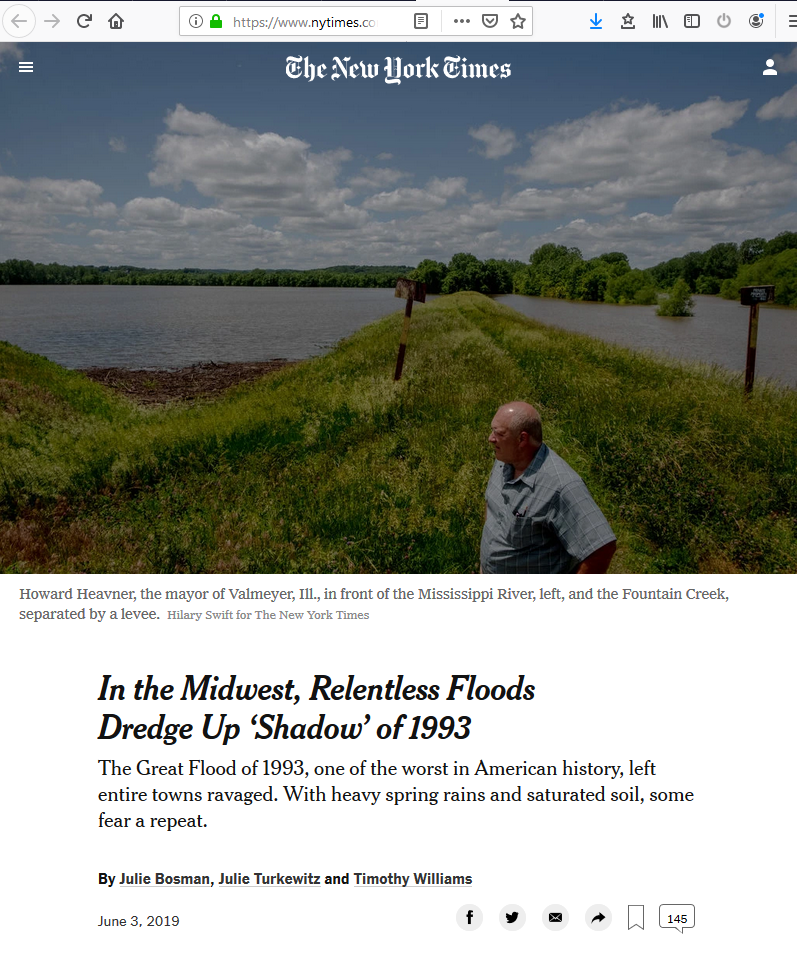 Recalling the Great Flood of 1993 and focusing on the four inundated towns of Davenport, Iowa; Valmeyer and Prairie du Rocher, Illinois; and Clarksville, Missouri, along the Mississippi River, the Times provided yet another example of a major news outlet covering the catastrophic effects of the ongoing climate crisis without ever mentioning that crisis—among other human contributions to the disaster that go unacknowledged—leading readers to think that there are no solutions to mitigate or prevent these disasters (FAIR.org, 1/18/13).

One could be forgiven for coming away from the New York Times report that “relentless floods” just happen as isolated occurrences, and that there’s just not that much we can do about it.

The Times mentioned that the 2019 deluge is “reviving painful memories of the Great Flood,” and that the “consequences of the decisions made in the aftermath of 1993” have “suddenly come back,” but when it explained those decisions, it mostly confined them to the local level, without setting them in the context of other important decisions made at the state and federal level.

The Times treated Valmeyer as an exemplar on how to respond to disasters, as “experts in flood management” hailed Valmeyer as a “case study,” and cited Mayor Howard Heavner claiming that Valmeyer is proof that “you can do everything right and the community can still be in danger.”

But when one reads closely on what Valmeyer did to be such a role model, one discovers that people essentially just moved away from the river, as a resigned Heavner said: “You can only position yourself so there is the least amount of loss.” Apparently, the only flaw in their otherwise flawless response is that “not everyone moved.”

The Times’ previous reporting (1/6/16) on Valmeyer’s response to flooding noted that “nearly everyone” who moved to what’s called New Valmeyer agreed that “they had no choice.” So why would people “choose” to stay behind in a mostly uninhabitable and hazardous location?

The current report hints at an answer from the only other source cited to explain this, Heavner’s own father Robert, but doesn’t expand on its significance, instead framing his being too poor to move as a personal choice or failing. It quotes him as saying that staying in the bottom area was “the most economical way to do what I did,” with his son the mayor claiming that he couldn’t force poor people to leave because they “chose their own path.”

This is consistent with FAIR’s previous findings  (Extra!, 8/07; FAIR.org, 9/1/17) on how corporate media marginalize the poor, who often stay behind in hazardous areas because they have no place to go and no means to leave, in their coverage of disasters.

In Clarksville, the Times uncritically mentioned that Clarksville depended on a “dwindling set of volunteers” from the Americorps, National Guard, prisoners and the elderly to build “monumental sandbag walls,” and noted the paltry number of volunteers Clarksville has in 2019, compared with the 2,000-some volunteers it had in 1993.

In Prairie du Rocher, the Times detailed how local officials took a “desperate gamble” in defying the advice of the Army Corps of Engineers in 1993 when they blasted and dug up holes in the levee above town to divert the flow away from the community’s center. They plan on doing the same this year, except that they “hope” to “blast the levee at a higher point.” Local levee commissioner Steve Gonzalez also wants to convince the federal government to incorporate the town into a national park, to “make Washington responsible for fortifying the community from floods.” If such plans fail, continual increases to the cost of the government subsidized National Flood Insurance Program run by FEMA and Washington’s further plans to raise premiums on those policies might “be the final nail in the coffin” for Prairie du Rocher.

Several questions could’ve been asked here: Why should Clarksville depend on a “dwindling” number of volunteers to deal with flooding? Why do local officials in Prairie du Rocher have to make “desperate gambles,” or plot to convince the federal government to take responsibility for the town’s safety?

The Times doesn’t discuss how the federal government’s refusal to adequately fund disaster infrastructure and management programs—in order to pay for continuous tax cuts for the rich and corporations—leave the country unnecessarily vulnerable to disasters. Nor does it discuss the Trump administration’s FEMA leaving out climate change in its strategic planning for disaster response, or failing levee systems consisting mainly of makeshift soil barriers, instead of the kind of modern water-diverting infrastructure in place in a country like the Netherlands, because the federal government refuses to appropriate funds to the few flood projects it authorizes, when it doesn’t reject them altogether (Roll Call, 6/13/18; The Hill, 4/5/19).

ProPublica (8/6/18) found that the cost-benefit calculations used by the Army Corps of Engineers to prioritize its scarce resources are essentially formulas to justify devastating poorer towns, like the ones in the Times’ report, as it pursues levee systems that protect the most high-value land at the cost of intensifying the flooding for others nearby, by cutting off a river’s ability to spread over the floodplain. This would partially explain why Midwest towns like Valmeyer, Clarksville and Prairie du Rocher are flooded as much as they are.

Even when cities like Davenport pursued praiseworthy alternatives to levees, like buying out land on the floodplain to embrace the river—which was successful from 1993 until 2019—the Times failed to link the floods overwhelming the city with a changing climate. This is the most glaring omission in the lengthy report’s failure to ever mention the worsening climate crisis, along with its neglecting to cite any climate scientist. 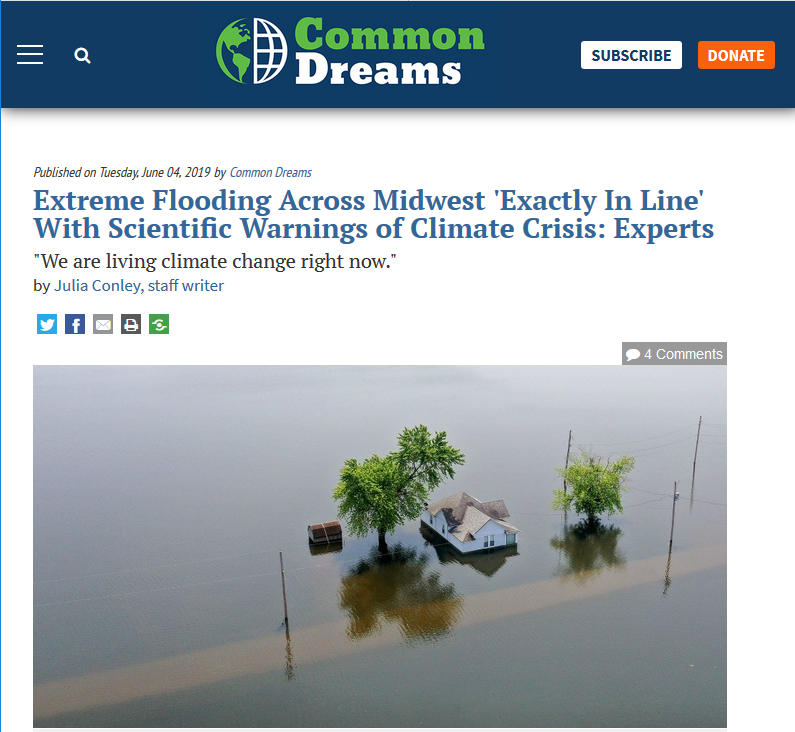 Of course, as FAIR’s Jim Naureckas (7/2/12) has pointed out, asking whether the climate crisis caused the flooding is a failure to understand the conceptual distinction between weather phenomena like droughts, floods and unremarkable days, and the climate. All weather events now take place within a changing climate, which will affect the severity and likelihood of these events, as climate scientists are projecting that floods—which are already the most frequent and costliest natural disaster—will become more frequent and powerful, with current and future devastating effects on essential activities like growing crops (Wired, 5/24/19).

While other outlets like Common Dreams (6/4/19) had no problem making the connection, this is also in contradiction with previous reporting in the Times (11/19/18), which warned of projections that increased flooding and other climate-fueled disasters would resemble a “terror movie that is real.” Ironically, just last month, the Times (5/15/19) carried a story about the aversion of leaders in places like Davenport and Clarksville to talking about the impacts of the climate crisis—headlined, “In Flood-Hit Midwest, Mayors See Climate Change as a Subject Best Avoided.” Apparently some Times reporters see it the same way.

How Art Can Stop Evictions

Joe Dinkin
The Choice for Democrats in Congress: Go Big or Go Home
END_OF_DOCUMENT_TOKEN_TO_BE_REPLACED
Connect With Us

END_OF_DOCUMENT_TOKEN_TO_BE_REPLACED

Banksy's newest, a two-fer Oscar Wilde tribute and call for prison reform, shows a prisoner climbing down bedsheets ending in a typewriter from Reading Gaol, known for housing Wilde during his two years' hard labor for "gross indecency" - being gay. Video juxtaposes Banky creating it with TV artist Bob Ross burbling about freedom; both are haunted by Wilde's final searing poem about the cruelty and bleakness of life behind bars: "Something was dead in each of us/and what was dead was hope."
Read More...
END_OF_DOCUMENT_TOKEN_TO_BE_REPLACED