SUBSCRIBE DONATE
Published on
Thursday, May 02, 2019
by
Fairness and Accuracy In Reporting (FAIR)

Venezuela: It’s Only a Coup if the US Government Says So

AP photograph of a coup supporter in front of a burning bus. (Photo: Fernando Llano)

It’s Groundhog Day again in Venezuela, as the local conservative opposition has launched another attempt to oust President Nicolás Maduro from power. Surrounded by a few hardcore supporters, Washington-backed self-appointed president Juan Guaidó on April 30 called on the military to rise up and overthrow the democratically elected Maduro. Guaidó, a man who has never even stood for president, attempted the same thing in January, and the opposition has attempted to remove Maduro, and his predecessor Hugo Chávez, on many occasions, including in 2017, 2014, 2013, 2002 and 2001. 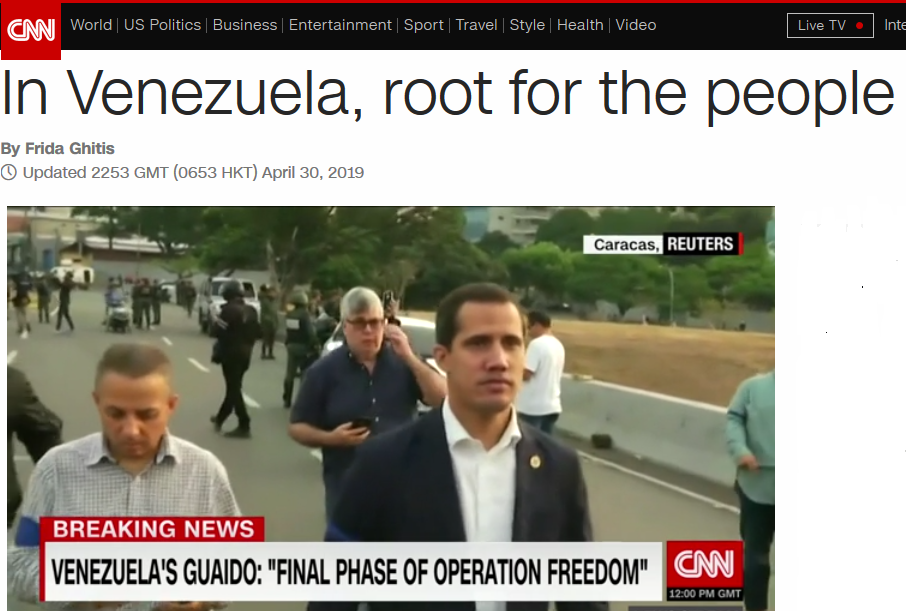 Despite bearing the clear hallmarks of a coup—defined as “the violent overthrow or alteration of an existing government by a small group”—US media have overwhelmingly supported it, as they have past attempts (FAIR.org, 1/25/19, 5/16/18, 4/18/02). CNN (4/30/19) told the United States that it must “root for the people” of Venezuela, before explicitly stating, “Rooting for the Venezuelan people means hoping that Maduro will step down”—thus underlining the phenomenon noted by FAIR (1/31/19) that to corporate media, “the people” of Venezuela are whoever agrees with the US government. CNN (4/30/19) also used images of Guaidó’s paramilitaries (identifiable by their blue armbands) to illustrate a report claiming the forces of “socialist dictator” Maduro were “mowing down citizens in the streets.” 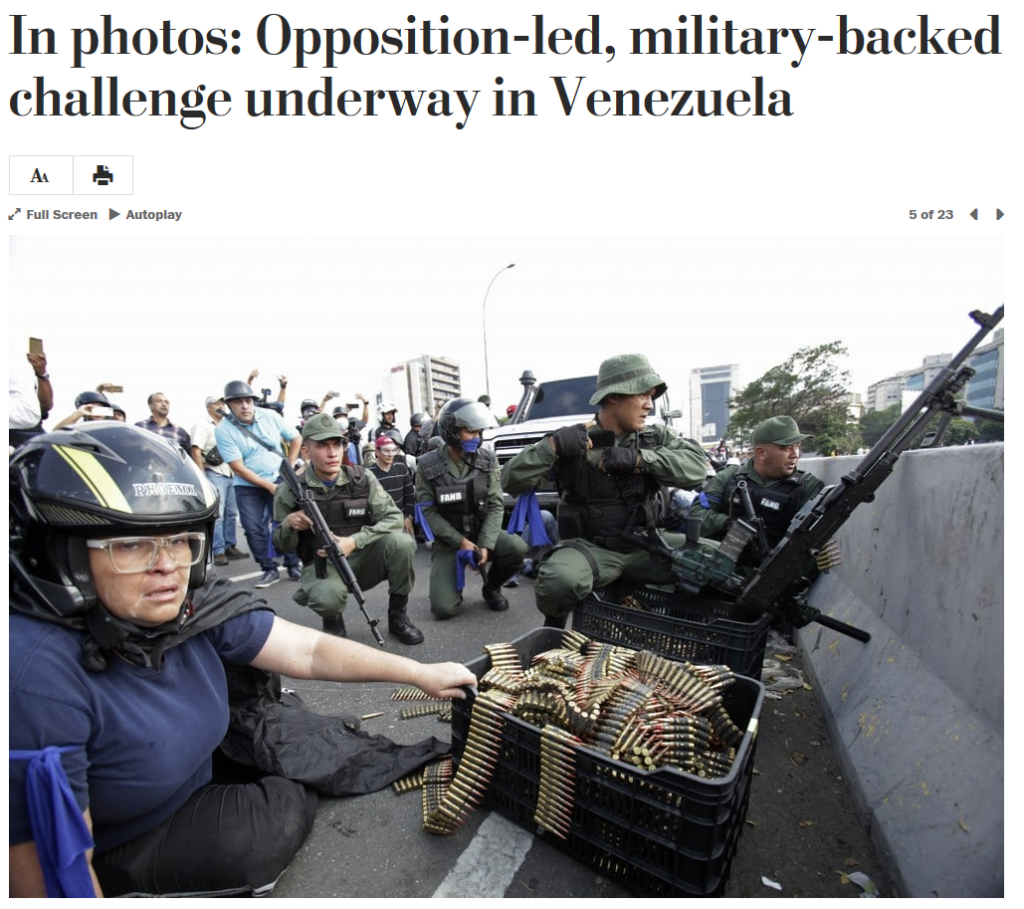 Framing how readers see an issue is an incredibly powerful tool of persuasion. It’s not carpet bombing, it’s surgical strikes. And people are more likely to accept advanced interrogation techniques than they are torture.

In their efforts to refrain from using the negative—but accurate—term “coup” to describe events they support, the media have sometimes had to go to bizarre, roundabout and garbled lengths to dance around it. The Washington Post (4/30/19) used the clunky phrase “opposition-led military-backed challenge.”  The Post (4/30/19) also published an article in support of Guaidó headlined “Is What’s Happening in Venezuela an Attempted Coup? First, Define ‘Coup,” arguing that there were such things as “noble” and “democratic coups.”

Even international organizations like the BBC (5/1/19), the Guardian (5/1/19) and Al-Jazeera (5/1/19) only used the word “coup” in quotations, characterizing it as an accusation attributed to government officials media have been demonizing for years (Extra!, 11–12/05; FAIR.org, 5/28/18, 4/11/19). This despite the fact that Al-Jazeera (4/30/19) reported on the day of the coup that Erik Prince, CEO of the private military contractor Blackwater, tried to persuade Donald Trump to let him send 5,000 mercenaries to Venezuela to “remove” Maduro.

The reasons for the reluctance of the media to use the word “coup” can be found in official announcements from the government. With all the credibility of an armed man in a mask repeatedly shouting “this is not technically a bank robbery,” national security advisor John Bolton told reporters on April 30, “This is clearly not a coup,” but an effort by ”the Venezuelan people” to “regain their freedom,” which the US “fully supports.” Likewise, Secretary of State Mike Pompeo announced that what we are seeing in Venezuela “is the will of the people to peacefully change the course of their country from one of despair to one of freedom and democracy.”

Soon after Bolton’s comments, Bloomberg published a series of articles (4/30/19; 4/30/19; 4/30/19), all by different writers, on why the events did not constitute a coup attempt. This, despite Bloomberg’s reporter Andrew Rosati revealing that coup leader Leopoldo Lopez told him and the rest the international media core that he wants the US to formally govern Venezuela once Maduro falls. 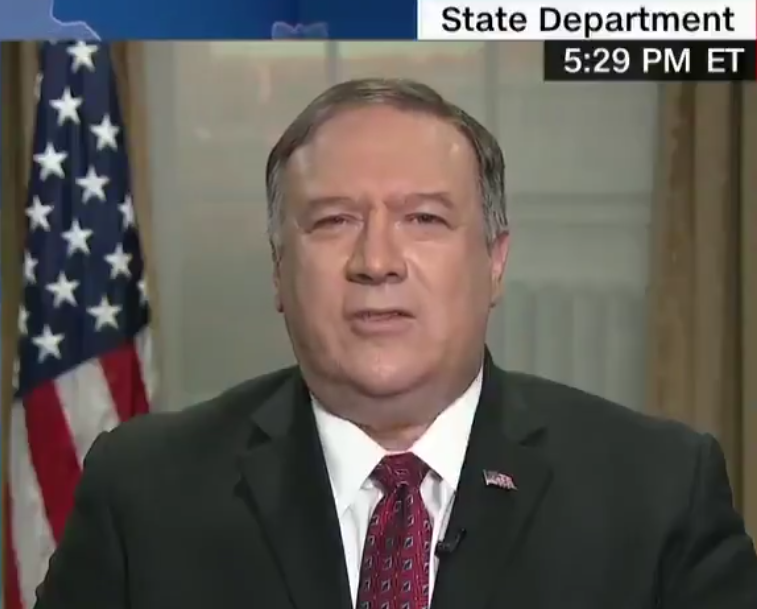 Pompeo made waves in April after publicly admitting at an event at Texas A&M University that he was a serial liar, cheat and thief. As CIA director, he declared, “We lied, we cheated, we stole. We had entire training courses [on it]!” Nevertheless, the media credulously repeated his astonishing claims, made in an interview with CNN’s Wolf Blitzer (5/1/19), that Maduro, who has survived multiple coup attempts and assassinations, had been on the airport tarmac on his way to Cuba, “ready to leave” Venezuela for good, only for Russia to tell him to stay. This dubious, unverified and officially contested assertion made headlines around the world (Daily Beast, 4/30/19; Newsweek, 4/30/19; Times of London, 5/1/19; Deutsche Welle, 4/30/19), with few questioning its credibility.

This is not the first time the media have lined up behind the government on a Venezuelan coup. As detailed in my book, Bad News From Venezuela: Twenty Years of Fake News and Misreporting, the US media also endorsed the April 2002 coup against Chavez, using euphemisms such as “popular uprising” (Miami Herald, 4/18/02), “unrest” (New York Times, 5/23/02) or “Chavez’s temporary downfall” (New York Times, 4/29/02) to frame events more positively. Only after an official White House spokesperson used the word “coup” on April 15, 2002, was the word frequently used in the media, suggesting a close synergy between government officials and those supposedly employed to hold them to account.

After barely 12 hours, the most recent coup attempt appeared to have failed under the weight of its own unpopularity. According to the New York Times (4/30/19), Guaidó failed to attract meaningful support from the military, his co-conspirator Leopoldo Lopez had sought refuge first in the Chilean then in the Spanish embassy, and 25 of his paramilitaries had done the same in the Brazilian one. Guaidó did not win over the Venezuelan majority, who had previously chased his motorcade out of a working class district when he tried to enter. Ordinary Venezuelans continued their lives, or even rushed to the defense of the government. As USA Today (5/1/19) summed up:

Guaidó called it the moment for Venezuelans to reclaim their democracy once and for all. But as the hours dragged on, he stood alone on a highway overpass with the same small cadre of soldiers with whom he launched a bold effort to spark a military uprising.

It appears that the main base of support for the coup was the US government…and the media. The press’s extraordinary complicity, lining up with the State Department’s version of the world in the face of empirical evidence, highlights the worrying closeness between media and government. When it comes to foreign policy, there is often no difference between deep state and fourth estate.

Richard Heinberg
Insurrection, Pandemic, and Censorship
END_OF_DOCUMENT_TOKEN_TO_BE_REPLACED
Connect With Us

END_OF_DOCUMENT_TOKEN_TO_BE_REPLACED

In a wrenching addendum to the drama of a day that saw the only U.S. president in history be impeached twice, the righteous charge to remove him was led by Maryland Rep. Jamie Raskin, whose 25-year-old son Tommy just died by suicide. The day after burying Tommy and feeling him " very much with me and my heart," Raskin was applauded by colleagues who knew of his loss as he came to certify the vote cut short by the riot; he did his duty because, "Change is made by people who show up."
Read More...
END_OF_DOCUMENT_TOKEN_TO_BE_REPLACED