SUBSCRIBE DONATE
Published on
Wednesday, April 10, 2019
by
Fairness and Accuracy In Reporting (FAIR)

Bill to End Yemen Siege Passes—No Thanks to MSNBC

Progressives—along with a handful of libertarian-leaning Republicans—finally passed a bill in both houses of Congress last week to invoke the War Powers act and end US support for the Saudi-led bombing of Yemen, an entirely one-sided war that’s killed thousands of Yemeni civilians over the last four years with assistance and direction of the US military.

As activist pressure on lawmakers mounted over the past few months, the nominally liberal media powerhouse MSNBC was once again AWOL. The 24-hour cable news channel has yet to cover the war in all of 2019, repeating a similar no-show record when activists were attempting to end the war last spring; MSNBC ignored Yemen entirely from September 2016 through July 2018 (FAIR.org, 3/20/18).

In August 2018, after almost two years of not doing a single segment on the US war on Yemen (August 31, 2016–August 9, 2018), Chris Hayes finally reported on a US-made bomb that killed over 40 children in a Yemen school bus. (A widely circulated FAIR Action Alert two weeks prior—7/23/18—pointing out MSNBC had 455 mentions of Stormy Daniels and 0 of Yemen from July 2017 to July 2018 may have contributed, but it’s impossible to know for sure.) 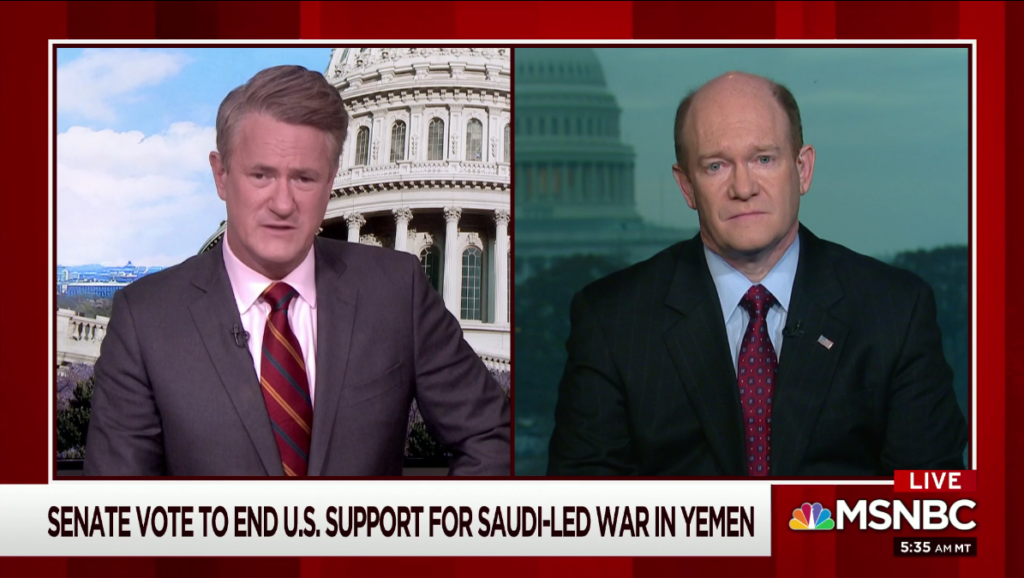 The October 2, 2018, murder of Washington Post columnist Jamal Khashoggi by Saudi agents, and the subsequent bipartisan, CIA-sanctioned outrage by US media that one of their own was killed, did provide cover for a handful of MSNBC segments on the Yemen siege in the final three months of 2018. But as that outrage receded, so too did the interest of Hayes (and MSNBC’s other big name hosts) to highlight Yemen. It’s been 116 days since December 14, 2018, the last time anyone on the network has mentioned Yemen, according to a search of MSNBC’s website and Twitter feed—a time period when anti-war activists needed it the most.

With a bill making its way to Trump’s desk that would finally end US arms sales, as well as intelligence and logistical support, for the Saudi campaign (which, CIA veteran Bruce Riedel insists, the war could not continue without), it’s worth reckoning with how inadequate and jingoistic liberal corporate media are when it comes to matters of US violence overseas. Big name progressives like Hayes, Rachel Maddow and Lawrence O’Donnell should be leading the charge on ending the war, inviting the likes of Bernie Sanders and Barbara Lee to come on to explain in real time why liberals should support anti-war legislation making its way through Congress.

Instead, the anti-war mantle is mostly ceded to grotesque, tabloid antisemites on the right—like Breitbart, which has run half a dozen articles in favor of ending US support for Saudi Arabia in 2019. Progressives in Congress, who have been leading the fight for peace in Yemen for years, are given little to no support from the media’s most prominent liberal messaging platform.

Afghanistan Withdrawal Good, Say Sanders and Khanna, But Biden Must Do More to End 'Forever Wars'

END_OF_DOCUMENT_TOKEN_TO_BE_REPLACED

Stupidity reigns: A year after the deadly fact, the U.S. still has over 70,000 new COVID cases a day thanks to recalcitrant morons like Gym "What-sexual-assault?" Jordan, who spent a House hearing shrieking at Dr. Fauci about "lost liberty" and demanding, "When do Americans get their freedom back?" A weary Fauci: It's not "a freedom thing," it's "a public health thing." It finally took Maxine Waters to quash Jordan with, "Shut your mouth." Amen, auntie.
Read More...
END_OF_DOCUMENT_TOKEN_TO_BE_REPLACED