Are We Descending Into Hothouse Earth?

The new normal could become a whole lot worse

"We could rapidly become 4 degrees warmer than today, as we spiral out of control very quickly, as one domino knocks another over. In fact, have we already started spiralling?" (Photo: AP)

As I write, Californian firefighters are tackling the largest wildfire in the state’s history, which is larger than the city of New York and rapidly approaching the size of Los Angeles.

Many in the state now believe that the future of “extreme fire” could be here. The new normal has arrived. What we used to know has gone.

But the new normal could become a whole lot worse. According to an international team of scientists, writing in the Proceedings of the National Academy of Sciences, if we do not stabilise the climate rapidly, we could experience a whole series of self-reinforcing feedbacks, which might force climate change to spiral out of control into what they call “Hothouse earth”.

We could rapidly become 4 degrees warmer than today, as we spiral out of control very quickly, as one domino knocks another over. In fact, have we already started spiralling? 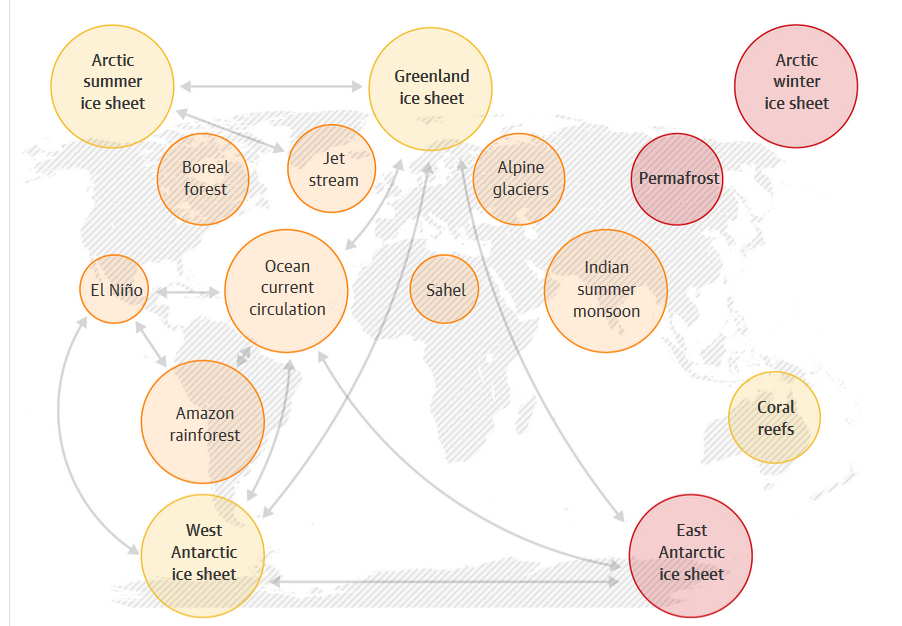 Climate scientists have known about and been deeply concerned about “self-reinforcing feedbacks” or “positive feedbacks” for years. One of the big worries is if large sources of stored carbon, such as in permafrost or locked in forests or soil, was suddenly released.

For example, back in 2011, for example, I blogged, “if warming goes above 2 degrees the chances of a runaway greenhouse effect happening increases. And one way this happens is through the kicking in of positive feedback mechanisms.”

To give you one example, the more the earth heats up, the more methane (which is a potent greenhouse gas) melts in the tundra, which forces more warming, which in turn forces more ice to melt and methane to be released. And so on it goes. The melting of the tundra and release of methane is one of the ten feedbacks talked about in the new research.

Another feedback mechanism would be how the melting of the Arctic disrupts the so-called “Atlantic ocean conveyor belt” which is also deeply concerning scientists. Indeed, earlier this month, New Scientist reported how “Swathes of the northern hemisphere are smashing temperature records. Could it be because we’ve broken the ocean currents that stabilise our weather?”

But if melting Arctic ice does slow down the Gulf stream ocean current and trap heat in the Southern Atlantic, this may start to impact the melting of Antarctic ice sheets and global sea level rise. Everything is inter-connected.

In the new research, the scientists argue that these ten feedbacks such as these “could push the Earth System toward a planetary threshold that, if crossed, could prevent stabilization of the climate at intermediate temperature rises and cause continued warming on a ‘Hothouse Earth’ pathway even as human emissions are reduced.”

They continue: “Crossing the threshold would lead to a much higher global average temperature than any interglacial in the past 1.2 million years and to sea levels significantly higher than at any time in the Holocene.”

They warn that “If the threshold is crossed, the resulting trajectory would likely cause serious disruptions to ecosystems, society, and economies.”

They caution that the hothouse trajectory “would almost certainly flood deltaic environments, increase the risk of damage from coastal storms, and eliminate coral reefs (and all of the benefits that they provide for societies) by the end of this century or earlier.”

“Collective human action is required to steer the Earth System away from a potential threshold and stabilize it in a habitable interglacial-like state,” they conclude.

Professor Johan Rockström, from the Stockholm Resilience Centre and one of the authors of the paper, is a leading expert on positive feedback mechanisms. He told the BBC “What we are saying is that when we reach 2 degrees of warming, we may be at a point where we hand over the control mechanism to Planet Earth herself.”

He added: “We are the ones in control right now, but once we go past 2 degrees, we see that the Earth system tips over from being a friend to a foe. We totally hand over our fate to an Earth system that starts rolling out of equilibrium.”

In an interview with the Guardian he also said “I do hope we are wrong, but as scientists we have a responsibility to explore whether this is real. We could end up delivering the Paris agreement and keep to 2C of warming, but then face an ugly surprise if the system starts to slip away.”

“The heatwave we now have in Europe is not something that was expected with just 1C of warming. Several positive feedback loops are already in operation, but they are still weak. We need studies to show when they might cause a runaway effect”, Rockström said.

Dr Phil Williamson, a climate researcher at the University of East Anglia, also told the Guardian: “In the context of the summer of 2018, this is definitely not a case of crying wolf, raising a false alarm: the wolves are now in sight.”

We Need a Green New Deal for Farmland

F. Douglas Stephenson
Coronavirus and Medicare for All: Our Crisis Comes From Gov’t Putting Profit over Public Health
END_OF_DOCUMENT_TOKEN_TO_BE_REPLACED
Connect With Us

END_OF_DOCUMENT_TOKEN_TO_BE_REPLACED

Goddamn. We mourn the gut-punching loss of singular songwriter, storyteller, good ole boy and lovely human being John Prine, whose deep, wry, bittersweet songs of real life helped so many get through so much. The world feels emptier without his plain-spoken wit and grace and gift of being the saddest and funniest guy in the room by "saying the thing without ever saying the thing." A fan: "Thanks for being so much more than we could ever deserve." Yeah this old man is goin' to town.
Read More...
END_OF_DOCUMENT_TOKEN_TO_BE_REPLACED