SUBSCRIBE DONATE
Published on
Thursday, May 31, 2018
by
Common Dreams

The Message From Saudi’s “Reformist” Crown Prince to Saudi Women: Shut Up And Drive

While gaining the right to drive certainly brings Saudi Arabia a step closer to joining the 21st century, the biggest impediment for women has not been the inability to drive—but the male guardianship system that is a form of gender apartheid.

"Instead of celebrating the true Saudi heroes, since May 15 at least 11 activists, both women and male allies, have been arrested." (Photo: @noconversion/Twitter)

The June issue of Vogue Arabia is dedicated to the “trailblazing women of Saudi Arabia” and the much-awaited June 24 date that will give Saudi women the right to drive. The cover shot is a glamorous photo of Princess Hayfa bint Abdullah Al Saud in the Jeddah desert, perched in the driver’s seat of a vintage red 1980s Mercedes-Benz convertible.

“It is easy to comment on other people’s societies and think that your own society is superior, but the Western world must remember that each country is specific and unique,” the princess told Vogue. “We have strengths and weaknesses but, invariably, it’s our culture, and it’s better to try to understand it than to judge it.”

But unlike the wealthy, pampered princess, for decades Saudi women themselves have been judging, and desperately trying to change, their society. They have been fighting to lift the travel ban since 1990, when 47 women piled into cars and drove around the capital. They were arrested and thrown in jail. Their passports were confiscated, those with government jobs were fired, and they were denounced in mosques across the country. Similar protests took place in 2011, 2013 and 2015.

Many Saudis believe the faces of these activists should be gracing the cover of Vogue Arabia and social media is ablaze with “corrected versions” of the magazine. But instead of celebrating the true Saudi heroes, since May 15 at least 11 activists, both women and male allies, have been arrested. One of the activists is in her 60s and another is 70 years old. Four have since been released. 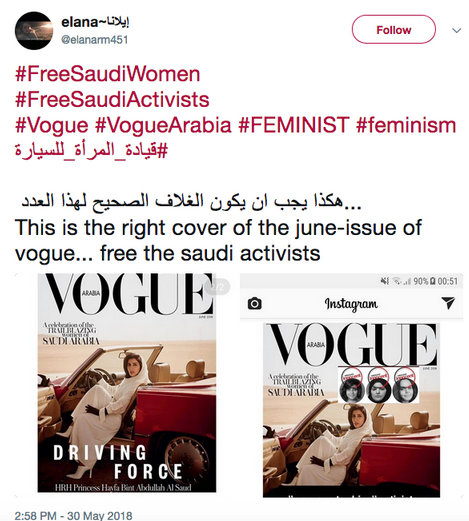 They are accused of “suspicious contact with foreign parties” and undermining the “security and stability” of Saudi Arabia. In a vicious smear campaign, the state-run media released their photos with the word “traitor” stamped in red across their faces. These peaceful activists may now face up to 20 years in prison for their work against the decades-old driving ban.

One of the best-known activists, 28-year-old Loujain al-Hathloul, has been arrested several times, including in March, just days before Saudi Crown Prince Mohammed bin Salman embarked on a three-week whirlwind visit to the United States to improve Saudi Arabia’s reputation and his role as the nation’s chief “reformer.” On this occasion, Al-Hathloul was not arrested for driving in Saudi Arabia but for driving in the nearby United Arab Emirates, where women are allowed to drive. In a spectacular abuse of power, she was snatched from her vehicle, deported to Saudi Arabia, imprisoned, and later released with a ban on using social media or leaving the country. Despite complying with the ban, she was re-arrested on May 15 and is reportedly being held incommunicado.

These Saudi women have been fighting for the right to drive but also for women’s rights more broadly. For while gaining the right to drive certainly brings Saudi Arabia a step closer to joining the 21st century, the biggest impediment for women has not been the inability to drive—or the fact that they, by law, must be totally covered in public. The biggest obstacle to women’s freedom is the male guardianship system that is a form of gender apartheid. Under this system, a woman, no matter her age, is treated as a minor and must live under the supervision of a wali, or guardian. This is a legally recognized male —her father, husband, uncle, or some other male relative (even her son)—who must grant formal permission for most of the significant issues affecting her life. Women are not allowed to marry, obtain a passport, travel—or drive--without the permission of their guardians.

Saudi Arabia is also the most gender-segregated society in the world. The government enforces sex segregation in virtually all workplaces except hospitals, and it fines businesses that fail to comply. In food outlets, including U.S. chains such as McDonalds or Kentucky Fried Chicken, all lines and eating areas are separated to keep unrelated men and women apart. The men’s section is usually the airy, front section, while the women and children are relegated to the back, shielded from public view. The majority of public buildings have separate entrances for men and women. Some even ban women from entering.

Now some of the nation’s most vociferous advocates for women’s equality are behind bars. Human Rights Watch said the arrests have sparked a “frenzy of fear.” Kareem Chehayeb of Amnesty International says that the recent sweeping crackdown on human rights activists is not an anomaly. “While Crown Prince Mohammed bin Salman continues to present himself as a reformer, peaceful human rights activism that calls for reforms continues to be criminalized,” said Chehayeb. It simply doesn't make sense.”

It does make sense, however, when you look at the chilling message it sends to Saudi women. It says that he, Mohammed bin Salman, is the agent of change who will dictate the pace of reform, not the Saudi women who have been fighting for their rights for decades. It says that he, Mohammed bin Salman, deserves and will get the credit for these reforms, not those who have been imprisoned over the years for their advocacy. Bin Salman’s message to women is simple: Shut up and drive.

So the next time you hear the hoopla about Saudi women driving or some propaganda story about the reformist crown prince, think about al-Hathloul and the women who have risked their lives not just to drive a car, but to drive out the extreme misogyny that forms the basis of the present-day Saudi regime.

Why Has the Media Ignored Sexual Assault and Misbehaviour Allegations Against Biden?

The Future May Be Female, But the Pandemic Is Patriarchal

Dr. Sanjeev K. Sriram
For National Doctors’ Day, Forget the Donuts. Can We Get Some Damn Masks?
END_OF_DOCUMENT_TOKEN_TO_BE_REPLACED
Connect With Us

END_OF_DOCUMENT_TOKEN_TO_BE_REPLACED

Nigh on speechless: After months of indictable denial, delay, ineptitude, Trump has said the country could see from 100,000 to 240,000 COVID-19 deaths, an obscenely preventable number that dwarfs the 3,500 deaths in China, with over four times our population. Critics are now speaking the ugly truth of "a fiasco of incredible proportions... We are witnessing one of the greatest failures of governance and basic leadership in modern times." A furious new hashtag: #TrumpGenocide.
Read More...
END_OF_DOCUMENT_TOKEN_TO_BE_REPLACED