After The Storm, It’s Labor vs. Finance for the Future of Puerto Rico

Wall Street, which has been plundering the island for years, is trying to tighten its grip on the island, meanwhile organized labor is working to rebuild its ranks.

'Now, financial interests are using this tragedy to exploit Puerto Rico even further. As Kate Aronoff, Angel Manuel Soto, and Averie Timm report in The Intercept, they are attempting to use PROMESA to accelerate the sell-off of Puerto Rico’s shared resources to private hands." (Photo: Joe Raedle/Getty Images)

Two opposing forces are fighting to reshape Puerto Rico in the wake of Hurricane Maria. Wall Street, which has been plundering the island for years, is trying to tighten its grip on the island. Meanwhile, organized labor is working to rebuild the island  – and to rebuild its own ranks in the process.

As our video reporting from Puerto Rico emphasizes, this confrontation reflects an ongoing battle for the future of the country. In one sense, Puerto Rico is the rest of the nation in extremis. Financial institutions have obtained a growing stranglehold over the island’s economy and manipulated politicians from both parties into prioritizing bank repayments over public need. The hungry have gone unfed, the sick have gone untreated, and needed infrastructure has gone unbuilt to meet the financial industry’s rapacious demands.

The financial industry had held the upper hand in Puerto Rico for years. It has lent money to the island’s financially troubled government at usurious terms, profited from the buying and selling of its debt while lobbying Washington to make sure the notes they hold takes priority over the public’s needs. Wall Street has encouraged the kind of predatory speculation that doesn’t just bet against the people of Puerto Rico, but rigs the game to make sure they lose.

The growing financialization of the American economy — that is, the growth of the FIRE (finance, insurance, and real estate) sector — took place with the active collaboration of elected officials. As political scientist Christopher Witko writes, “politics and policy contributed just as much to the FIRE sector’s growth as hedge fund managers and bank officials trying to get rich.”

Witko’s research shows that Republicans have historically aided the FIRE sector. But he also found that, as Democrats courted elite voters and donors,

“The Democratic Party started supporting deregulation and other policies that their new voters and campaign funders preferred, helping the financial sector grow — while beginning to ignore policies that would help manufacturing, construction and the like.”

But it wasn’t just the FIRE sector that was to blame. Overall, corporate interests used their political power in ways that would further decimate both Puerto Rico and the entire American working class. Environmental regulations were weakened, which accelerated global warming. As the environmental group 350.org commented, “We should be naming hurricanes after Exxon and Chevron, not Harvey and Irma.”

That power was also used to undermine unions with policies that made it harder to organize in the workplace. Republicans passed so-called right-to-work laws in a number of states, while weakened Democratic support prevented the passage of the Employee Free Choice Act and other measures that would have benefited organized labor.

This, in turn, has decimated the American working class. The International Monetary Fund is widely considered an instrument of the global financial elite. But IMF researchers concluded in 2015 that there is a direct link between the decline in union membership and growing inequality. They summarized their findings by writing that “the decline in union density has been strongly associated with the rise of top income inequality,” and that “unionization matters for income distribution.”

The parallel nature of labor’s membership decline and the loss of middle-class income couldn’t be more striking: 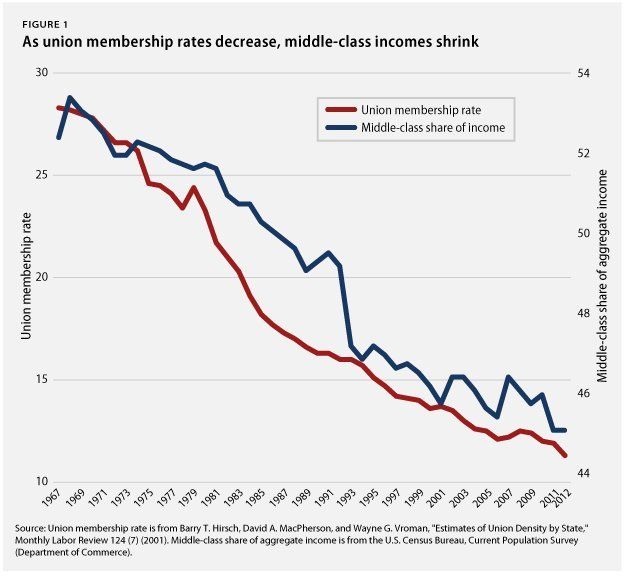 As the Democratic Party gradually distanced itself from unions, the media industry increasingly found its interests conflicting with those of organized labor as it, too, succumbed to financialization.


In many ways, the Washington Post led the way. First it went public, a financial move which placed its executive under intense pressure to resist union demands. Then, as veteran journalist and former Post reporter John Hanrahan explains in the interview below, the Post launched a campaign of propaganda and disinformation against some of its own union workers during a 1975 strike:

“After all,” Hanrahan told us, “if… one of the leading newspapers in the country takes a strong stand against its own unions and busts them in a very primitive fashion, then why not do it on the national level?” said former Post reporter John Hanrahan.

As Pete Tucker notes, the Post’s actions helped set the stage for future union-busting actions during the Reagan era. Those actions were supported and funded by the lead actors in an increasingly financialized economy. The growing financiaization of the American economy, the political war of attrition against the labor movement, an explosion in inequality, and the death of the American working class — these interlocking forces have increasingly held the American working class in a death grip.

“… tax breaks lured industry from the mainland to Puerto Rico, but in recent decades those advantages were yanked back. That set the stage for vulture hedge funds to swoop into the vacuum, but left hospitals, schools, electrical and communications grids too underfunded and fragile to weather a Category 4 hurricane.”

Figueroa spoke with us about the financial history Puerto Rico and the fate of his hometown:

Years later, in the final years of the Obama presidency, corporate interests were launching a new attack on Puerto Rico’s finances. The PROMESA law created an unelected oversight board capable of making vital decisions Puerto Rico’s finances. The board, which consists of four Republicans and three Democrats, is dominated by appointees who could fairly be considered friendly toward financial interests. (The measure was supported by then-President Obama and candidate Hillary Clinton; it was opposed by candidate Bernie Sanders, as well as by labor leaders and Puerto Rican activists.)

Now, financial interests are using this tragedy to exploit Puerto Rico even further. As Kate Aronoff, Angel Manuel Soto, and Averie Timm report in The Intercept, they are attempting to use PROMESA to accelerate the sell-off of Puerto Rico’s shared resources to private hands.

That makes it especially striking to see a new force enter the Puerto Rican scene: a labor contingent determined to do what the financial industry and its operatives in the political world will not: rebuild Puerto Rico and rescue its people.

The AFL-CIO organized a workforce of more than 300 mainland workers to aid in Puerto Rico’s recovery. Most of them were flown to the island on a flight donated by United Airlines at the request of the its unions (including the flight attendants’ union, whose president worked the flight herself.) Other unions represented, according to a spokesperson, included “the AFT, AFSCME, National Nurses United, SEIU, the Teamsters, Operating Engineers, Electrical Workers, Plumbers, Painters, Boilermakers, Laborers, Steelworkers, Auto Workers and Utility Workers.”

Journalist Alexander Zaitchik is covering Puerto Rico’s recovery for my radio/TV program The Zero Hour. In a debrief with us, Zaitchik spoke off the determined and yet surprisingly festive air of the volunteer workers in their first days on the island:

Zaitchik characterized the welcoming ceremony as “a raucous, positive event … a nice counterpoint to the sullen, kind of absurd Trump visit … a beautiful cross section of the American labor movement, multilingual and multiracial.”

Added Zaitchik: “All those people who say that we can’t have a unified, cross-racial working class politics int this country post-Trump, I would direct them to that scene …”

Zaitchik said that local and union volunteers had developed a highly organized system for coordinating relief, despite the lack of top-down authority. Similar examples, like the efforts of the Common Ground Collective after Hurricane Katrina, have been described by anthropologist David Graeber as “democratic self-organization.”

In helping to rebuild Puerto Rico, is it possible that these volunteers also helping to rebuild the US labor movement? Efforts like these can build solidarity and enthusiasm while encouraging non-union members others identify with the labor movement. Still, it would be naive to overlook the fact that the labor movement faces enormous obstacles and extremely long odds. It can only be rebuilt by a broad coalition that incorporates organizing, electoral politics, and street activism. It remains to be seen if that coalition can be built.

Movements are most effective when they provide their participants with a sense of purpose, optimism, and joy. Those emotions are clearly present in the workers who have gone to Puerto Rico. Their celebratory spirit brings to mind an observation by writer Rebecca Solnit: “Joy doesn’t betray but sustains activism. And when you face a politics that aspires to make you fearful, alienated and isolated, joy is a fine initial act of insurrection.”

(Zaitchik interviewed a number of union volunteers. Several of them speak about their volunteer work in the following videos.)

Richard (RJ) Eskowis a freelance writer. Much of his work can be found on eskow.substack.com. His weekly program, The Zero Hour, can be found on cable television, radio, Spotify, and podcast media. He is a senior advisor with Social Security Works. He can be reached at richard@thisisthezerohour.com.Follow him on Twitter: @rjeskow

END_OF_DOCUMENT_TOKEN_TO_BE_REPLACED

Minutes before the Derek Chauvin verdict, a white cop in Columbus, Ohio shot and killed Ma'Khia Bryant, 16, a black girl in foster care who was threatening another girl with a knife. Many details are unclear - it was reportedly Bryant who called police when older girls were attacking her - but goddamn why can't cops disarm a 16-year-old girl without pumping four shots into her chest within seconds of arriving? Just kidding. We know why.
Read More...
END_OF_DOCUMENT_TOKEN_TO_BE_REPLACED