Trump Wants 10-fold Increase In Atom Bombs But Is After Iran, Which Has None

A nuclear warhead dropped on a major city like New York or Beijing or Moscow could kill 700,000 people. Then ten could kill 7 million. A hundred could kill 70 million.

As far as I can figure, the US presently has about 6,800 nuclear warheads, though it aims at going down to 4018 once it dismantles those scheduled to be decommissioned, by 2023.

The Russian Federation has about 7,000 nuclear warheads, though it aims at going down to 4,300 once it dismantles those scheduled to be decommissioned, by 2023.

This small missile gap of, practically speaking, 282 bombs appears to be sticking in Donald Trump’s craw.

Last summer he was shown a chart like this one (h/t Wikimedia Commons) in a security meeting at the Pentagon: 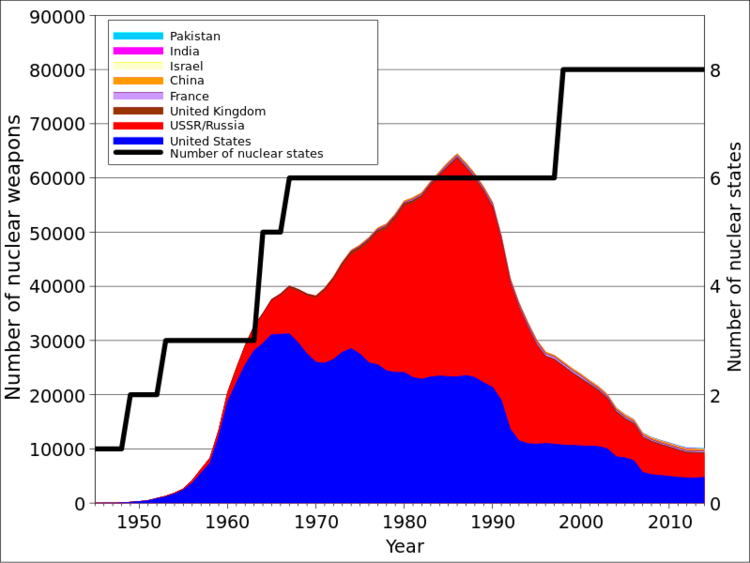 Trump appears to have been disturbed that the US stockpile had dropped from over 30,000 in the early 1960s and to have shouted at his National Security Council that he wanted a ten-fold increase in the number of nuclear warheads the US holds. Maybe he wanted 40,180, ten times the number of actual strategic warheads in the active US arsenal. That would be over 8,000 more than the US ever had.

NBC reports that it was over this exchange that Secretary of State Rex Tillerson sighed that Trump is a “fucking moron.”

Trump wants to bother poor little Iran, which does not have a bomb and has given up the possibility of getting one. But he wants to manufacture thousands of the things? Where are the sanctions on Trump?

Trump tweeted out, predictably, that the NBC story is fake news and that the National Broadcasting Corporation should have its license revoked, and that it is terrible that journalists can just write whatever they want. Never mind that under the 1st Amendment NBC does not need a license, though the FCC did grant them a perch on the limited national airwaves when people mainly got their signal via rabbit ears. Never mind that the Constitution allows journalists to write what they like, short of egregious libel (and it is really hard to libel a public figure according to US case law).

But let’s not let ourselves be distracted by this flak.

Let us take seriously that Trump did urge a ten-fold increase in nuclear weapons. Of course, that would violate numerous existing treaties and kick off a massive arms race with Russia and China, maybe with India (and Pakistan would want to keep up with India).

Today there are roughly 14,000 nuclear warheads in the world. All are much more powerful than the bombs dropped in WW II.

Let’s say a single high tonnage nuclear warhead dropped on a major city like New York or Beijing or Moscow could kill 700,000 people.

Then ten could kill 7 million. A hundred could kill 70 million. If the US and Russia let off all of their stockpile they could kill more than the entire combined population of the US and the Russian Federation. No one would survive such an exchange in either country.

Those are direct hits. There would be massive amounts of radiation affecting neighboring countries (Canada, Mexico, eastern Europe, northern China). When The Chernobyl plant melted down in 1986, we were living in London and were instructed not to drink milk because the radiation had spread on British grass from over in Ukraine and gotten into British cow udders. How many miscarriages would there be? Cases of cancer?

And of course urban infrastructure would be devastated, which in today’s complex world would also cause more deaths. Look at Puerto Rico, where there is still largely no electricity and where patients in hospitals without back-up generators are endangered.

A nuclear exchange would inevitably kick a lot of dust into the atmosphere and there’d be several bad summer growing seasons because of the cold and reduced sunlight. Millions more could die from this cause, a small nuclear winter.

Going down to as few nuclear warheads as possible is highly desirable. If Trump got his huge arsenal,maybe he would want some high megaton bombs of the sort that have been phased out, bringing back the threat of a true nuclear winter.

I now think Tillerson’s response to Trump’s tirade at the Pentagon last summer was ‘way too restrained.

Maybe everyone figures that Trump was only blowing off steam and that nothing will change. But they should take a gander at how the EPA has been turned into an evil bizarro anti-EPA dedicated to spreading around poisonous pollution and farting billions of tons of carbon dioxide into the atmosphere, so as to produce even more violent hurricanes.

When someone is president, you have to take them seriously, however hard it may be.

Appendix: The current state of the US and Russian stockpiles:

The Bulletin of the Atomic Scientists estimates that Russia has

7,000 nuclear warheads, with 2,700 decommissioned and being dismantled

4,300 or so nuclear weapons in its military stockpile.

1,958 are on ballistic missiles and at heavy bomber bases.

1,850 nonstrategic warheads are in storage.

Some 2,700 warheads have been decommissioned and are awaiting dismantlement.

On the United States of America side of the ledger, Armscontrol.org estimates

6,819 total warheads, with 2800 decommissioned and being dismantled

In a January 2017 speech, Vice President Joe Biden announced that as of September 30, 2016, the United States possessed

Biden also announced in January 2017 that the US is retiring 2,800 warheads.

Richard Heinberg
Insurrection, Pandemic, and Censorship
END_OF_DOCUMENT_TOKEN_TO_BE_REPLACED
Connect With Us

END_OF_DOCUMENT_TOKEN_TO_BE_REPLACED

In a wrenching addendum to the drama of a day that saw the only U.S. president in history be impeached twice, the righteous charge to remove him was led by Maryland Rep. Jamie Raskin, whose 25-year-old son Tommy just died by suicide. The day after burying Tommy and feeling him " very much with me and my heart," Raskin was applauded by colleagues who knew of his loss as he came to certify the vote cut short by the riot; he did his duty because, "Change is made by people who show up."
Read More...
END_OF_DOCUMENT_TOKEN_TO_BE_REPLACED