Oxfam’s Crystal Ball Confirmed: The Top 1% Now Own Over Half of the World’s Wealth

The world is experiencing an immense problem with wealth inequality, and it’s not just a problem of economics, it’s a problem of power.

Credit Suisse’s findings are in line with Oxfam’s prediction that global wealth inequality is only becoming greater. Last January, we predicted that the richest 1 percent would capture more than half of all household wealth by 2016. It looks like our prediction was right, but that we were too conservative, since it has happened a year early. Alas, our forecast was confirmed, but it’s nothing to celebrate. 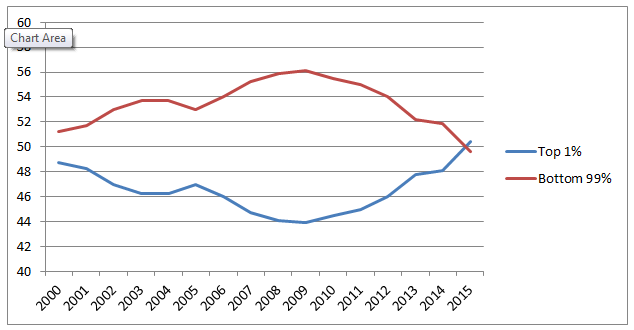 When you look at the very top of the global wealth pyramid, the situation is much more alarming. When we first calculated in January 2014, the 85 richest individuals own more wealth than the poorest half of the planet. This trend has also worsened since that time. Last January, it was down to 80 people.

The implications of rising extreme wealth inequality are greatly worrying. The highly unbalanced concentration of economic resources in the hands of fewer and fewer people impacts social stability within countries and threatens security on a global scale. It makes poverty reduction harder, threatens political inclusion, and compounds other inequalities.

In many ways, today’s problem of rising wealth inequality reflects who wields power across societies. For instance, multinational corporations and the very rich are able to shift their wealth to low tax jurisdictions and often pay lower rates on their wealth at home than average citizens pay on their hard-earned incomes.

In this respect, the real challenge is how average people can take back political power from wealthy elites who have the resources to rig the economic game in their favor. The rigging is evident in the ways elites are able to undermine democracy and equal representation by infusing huge amounts of cash into the political process. It’s also clear in the influence elites use to ‘capture’ the marketplace of ideas, perpetuating myths like trickle-down policies helping the poor and austerity measures are “responsible” – both which have been consistently disproven.

Findings such as Credit Suisse’s are awaking wide publics to the huge economic disparities that define the modern world. And people are increasingly calling attention to government policies that only work for the wealthy. For instance, in a recent Pew survey respondents from 34 emerging and developing economies indicated corruption was the second biggest problem facing their country. The links between corruption, crony capitalism and inequality aren’t hard to find. A study of India’s new billionaires found that nearly half made their fortunes in ‘rent thick’ sectors, meaning their wealth depended on exclusive government giveaways (such as permission to build on public lands or control over the telecom spectrum). Corruption and bribery are often behind such exclusive privileges.

What’s encouraging is that citizens from rich and poor countries are pushing back. There seems to be a global zeitgeist that capitalism has descended from being about competition and innovation to monopoly and corporatism. The latter are responsible for the massive inequalities we are grappling with today, especially the unfathomable concentration of the world’s wealth among an incredibly small number of people. The Credit Suisse figures empower citizens to hold governments to account for today’s inequalities with the cold, hard data to back up the injustices of poverty and power we see every day.

This blog was co-authored by Stephanie Fontana, a Research Intern at Oxfam America.

END_OF_DOCUMENT_TOKEN_TO_BE_REPLACED

Banksy's newest, a two-fer Oscar Wilde tribute and call for prison reform, shows a prisoner climbing down bedsheets ending in a typewriter from Reading Gaol, known for housing Wilde during his two years' hard labor for "gross indecency" - being gay. Video juxtaposes Banky creating it with TV artist Bob Ross burbling about freedom; both are haunted by Wilde's final searing poem about the cruelty and bleakness of life behind bars: "Something was dead in each of us/and what was dead was hope."
Read More...
END_OF_DOCUMENT_TOKEN_TO_BE_REPLACED