GREAT FALLS, Mont. - Environmental and landowner groups today argued in federal court that the Trump administration’s rubber-stamp approval of a cross-border permit for the proposed Keystone XL pipeline violated environmental laws and should be vacated.

The lawsuit challenges the U.S. Department of State’s inadequate and outdated environmental review of the pipeline. That review relied on an old environmental impact statement from January 2014 and failed to consider key information on the impacts of the 1,700-mile pipeline, which would carry up to 35 million gallons of oil a day from Canada’s tar sands — one of the world’s dirtiest energy sources — across critical water sources and wildlife habitat to Texas refineries.

Plaintiffs Northern Plains Resource Council, Bold Alliance, Center for Biological Diversity, Friends of the Earth, Natural Resources Defense Council, and Sierra Club filed the lawsuit in March 2017. The case is being argued in the U.S. District Court for the District of Montana.

Beginning in February, the court ordered the Trump administration to disclose additional documents related to the project, which the court found had been improperly withheld. Last night, on the eve of oral arguments, landowners and pipeline opponents hosted a rally at Elks Riverside Park on the banks of the Missouri River.

Featured speakers included Bill Whitehead, chair of the Water Commission of the Assiniboine and Sioux Tribes; Dena Hoff, farmer and irrigator on the Yellowstone River; Stuart Lewin, board member and officer of Missouri River Citizens, Inc.; Art Tanderup, a Nebraska farmer and landowner on the proposed KXL route; and Joye Braun, organizer with the Indigenous Environmental Network.

Rally attendees then marched across the Missouri river, past the federal courthouse in Great Falls where today’s hearing was held, to West Bank Park on the bank of the Missouri River.

“The communities being threatened by the Keystone XL pipeline deserve a full accounting of its impacts, and the law requires it,” said Sierra Club Senior Attorney Doug Hayes. "The Trump administration thought they could avoid a full analysis of Keystone XL in order to score a quick political win, but they are not above complying with the law. Our environmental laws exist to protect the American people, and federal agencies cannot flout these laws for the benefit of a foreign oil company.”

“In approving Keystone XL, the Trump administration unlawfully ignored that it would be a disaster for our climate, wildlife and clean water,” said Jared Margolis, a senior attorney at the Center for Biological Diversity. “Regulators failed to fully consider this pipeline’s profound threats to the environment and endangered species, including the iconic whooping crane, which would be devastated by the project’s power lines. The government failed to do its job, and this terrible project must be stopped.”

“Keystone XL threatens the Ogallala aquifer and fragile Sandhills in Nebraska, as well as the migratory route of our beloved and endangered whooping cranes, and the outdated environmental review does not even encompass new land and endangered species habitat on the proposed ‘Mainline Alternative’ route in Nebraska,” said Mark Hefflinger, communications director for Bold Alliance.

“The Trump administration barreled into office eager to appease big polluters, and fast. So fast it acted illegally by approving the KXL project even before it had an approved route,” said Jackie Prange, a senior attorney at the Natural Resources Defense Council. “But no route will ever be safe. Wherever it goes, this dangerous pipeline will always pose an unacceptable risk to water supplies for farmers, ranchers, indigenous people, and communities. We intend to stop it once, and for all.”

“Trump evaded the law to rush the construction of Keystone XL pipeline, ignoring the direct danger this dirty project puts our communities and environment in,” said Marcie Keever, legal director at Friends of the Earth. “We cannot stand by while Trump and Big Oil imperil water supplies, threaten endangered species, destroy forests and accelerate climate change. Keystone XL is an environmental disaster waiting to happen and this administration cannot ignore the law to avoid assessing the risk this pipeline poses.”

“Our struggle with Keystone XL has gone on so far and so long that it can be easy to miss the original, basic facts. The fact is, when I gave a negative answer to the question, ‘Do you want a pipeline to cross your land?’ I was asked by a Keystone XL fieldman if I really wanted to take on a multibillion-dollar corporation. I guess I do, since the pending pipeline was forced on me and on my land,” said Don Brown, a Montana landowner whose ranch would be crossed by the proposed pipeline, and Northern Plains Resource Council member. “I took this to be a threat of condemnation where my constitutional right to protect my property is violated.” 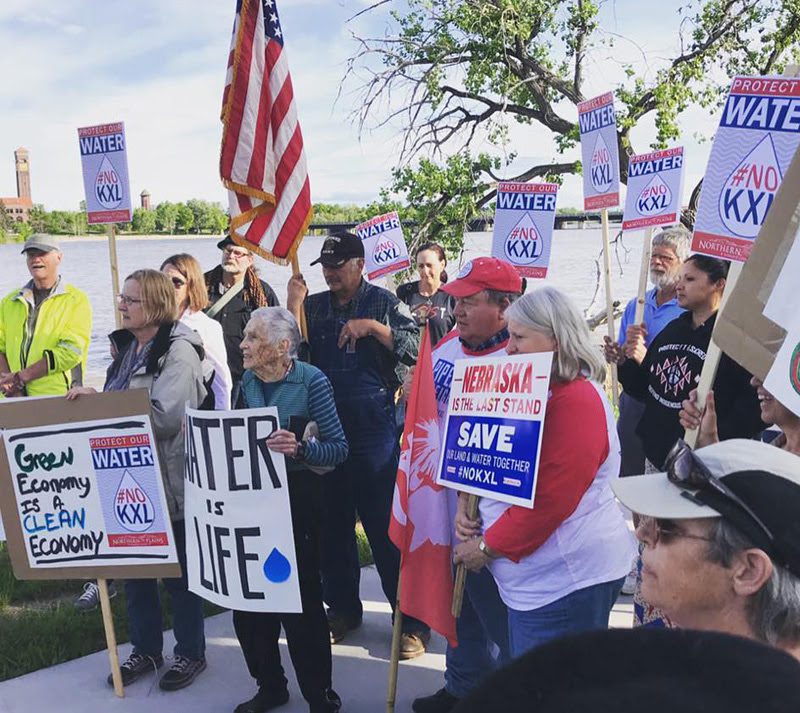 Randall Amster
Holding Our Breath, Together and Apart
END_OF_DOCUMENT_TOKEN_TO_BE_REPLACED

Nigh on speechless: After months of criminal denial, delay, ineptitude, Trump has said the country could see up to 240,000 COVID-19 deaths, an obscenely preventable number that dwarfs the 3,500 deaths in China, with over four times our population. Critics are now speaking the ugly truth of "a fiasco of incredible proportions... We are witnessing one of the greatest failures of governance and basic leadership in modern times." A furious new hashtag: #TrumpGenocide.
Read More...
END_OF_DOCUMENT_TOKEN_TO_BE_REPLACED