According to the findings, climate tipping points could happen in a matter of years or decades, not on the ecological timescale of hundreds, or even, thousands of years.

A coral reef in Indonesia. Coral reefs—especially Australia’s Great Barrier Reef—have proven to be very sensitive to climate change. Now scientists are trying to determine the mechanisms for climate ecosystem tipping points, and how fast they will occur around the world. (Photo: HereIsTom on VisualHunt.com / CC BY-NC-ND)

The world’s largest ecosystems may alter drastically faster than previously thought, according to a recent study published in Nature Communications, shedding new light on the behavior of climate tipping points.

Real-life cases reveal a pattern: bigger ecosystems collapse at a faster rate than smaller ones. According to the findings, climate tipping points could happen in a matter of years or decades, not on the ecological timescale of hundreds, or even, thousands of years.

The authors—stressing high levels of uncertainty—forecast that, after a tipping point is passed, the Amazon rainforest could disappear in under 50 years, while Caribbean coral reefs could vanish in 15 years.

Observing this trend, the authors—stressing high levels of uncertainty—forecast that, after a tipping point is passed, the Amazon rainforest could disappear in under 50 years, while Caribbean coral reefs could vanish in 15 years.

“The Amazon could die before I do,” study co-author Simon Willcock, a senior lecturer at Bangor University, pondered upon seeing the results. “I had never sat down and thought it might be gone in my lifetime. It’s quite sobering.”

Over a decade ago, a group of scientists published a groundbreaking paper on climate tipping points, widely regarded as an unlikely scenario at the time. But with evidence mounting, many scientists have more recently sounded the alarm on melting ice caps and tropical rainforest dieback nearing permanent regime shifts. Today, some of these tipping points are very likely just around the corner, with the potential of triggering devastating global effects such as runaway global warming, extreme weather and food shortages.

Leading Amazon experts Carlos Nobre and Thomas Lovejoy, wrote a recent editorial warning that the “Amazon tipping point is here,” based on real-world observations of a drying atmosphere. “We’re on the edge of a cliff,” Nobre told Mongabay. The modeling carried out by Willcock and his colleagues gives us a clearer picture of what a tipping point of this scale may look like. 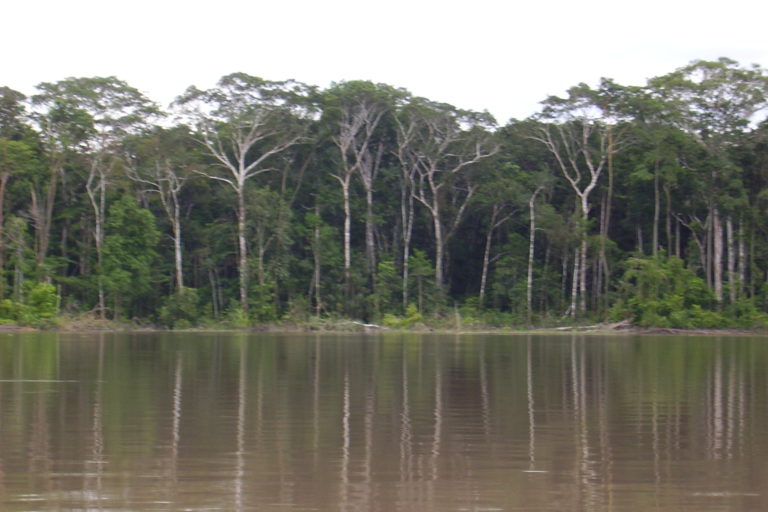 Domino effects — called “cascades” by scientists — occur at a quicker pace in systems where habitats and species are interconnected, which is more common in the earth’s large biomes. While this interrelatedness helps these larger systems build resilience, interconnectedness also amplifies collapse.

It works similar to logs in a fire, Willcock explains: one log gives you an hour of fire, but two logs together give you an hour and a half because properties change with the size. “Extra relationships and linkages through animals and plants affect how shock can pass through the system.”

Large coral reefs, tropical rainforests and the frozen poles are seen by many as permanent features of the planet. But fueled by widespread human-led destruction, we are edging closer to climate tipping points and the dire consequences that will follow. “The apparent long-term stability of the largest, least disturbed ecosystems is a deceptive guide to the potential speed of their collapse,” the paper warns. “Humanity now needs to prepare for changes in ecosystems that are faster than we previously envisaged through our traditional linear view of the world.”

Humanity has been lulled into a false sense of security surrounding biome permanence, perhaps because the global climate has been unusually stable for the past 10,000 years — generating a climate and ecosystem steady-state that no longer exists.

For leading Brazilian climate scientist Carlos Nobre, the findings are in line with his predictions for the Amazon rainforest: “If we reach a tipping point, the rainforest will convert into a degraded savanna in 30 to 50 years,” Nobre said. “This paper is a more rigorous analysis of these risks, and puts the Amazon on the same temporal scale with other ecosystems.” 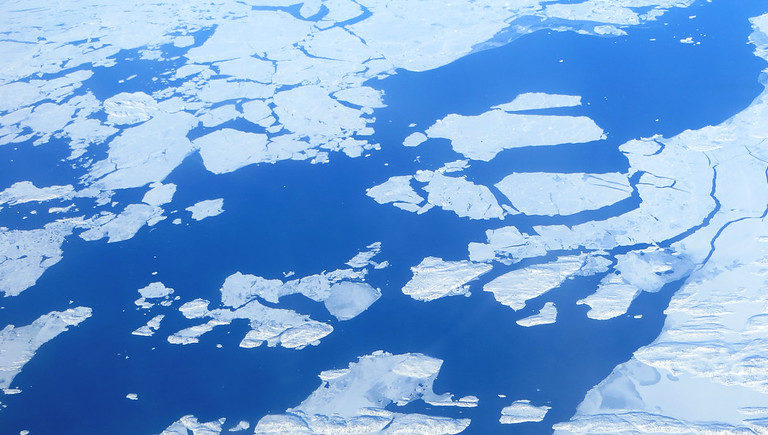 The new study is the first explicit dive into looking at the relationship between the time and space of tipping points, the researchers say. From small ponds to desertification of the Sahel in Burkina Faso, Africa, a total of 42 case studies were analyzed within an extensive database: 13 freshwater, 25 marine, and 4 terrestrial ecosystems.

However, some scientists say the data doesn’t support conclusions regarding the sudden collapse of tropical rainforests. According to Erika Berenguer, a conservation researcher at Oxford University, the study prediction for the Amazon is a “heroic speculation,” and not backed by good evidence. “We are living in a moment of anti-science movements and conspiracy theories — we need to be careful with presenting speculations in our papers,” she said. “In their dataset,” Berenguer points out, “there are only four terrestrial ecosystems [evaluated] and none are similar to a rainforest. Observations about coral reefs cannot be extrapolated to the Amazon. It may be the case for some ecosystems, but we don’t know if this is the case for all.”

For Sassan Saatchi, a senior researcher and ecosystems expert at NASA’s Jet Propulsion Laboratory, this is a budding area of research. “We are at the early stages of this; it is the science of the 21st century,” he told Mongabay, “Some of these models do not have enough observations yet, so it is an area of research that will probably grow more.”

The authors of the paper say their results don’t aim at making precise forecasts: “Slightly wrong data is more useful than no data whatsoever,” Willcock suggested. “Our findings point towards a general global pattern.”

“We’re putting it on the map,” adds Gregory Cooper, a geographer from the University of Southampton and paper co-author. “If the Amazon were to follow the patterns that these other tipping points have followed, this is the temporal scale it would work under.”

In a business-as-usual scenario, Saatchi estimates it would take 100 years (+/- 20 years) for the entire tropical system to degrade through human activity, while climate factors may halve that timeframe, in line with the study’s estimates. “The entire tropics are largely underdeveloped, with a huge tendency [now] towards building infrastructure.…” he said. Underdeveloped tropical nations “aspire to that, and the global community wants to see them develop, but it also causes destruction to the forest.”

Another recent study warns that even slight environmental shifts may cause a tipping point many years down the line — a sort of temporal butterfly effect. “Don’t be fooled by how small the changes are, because it shows there is a process of evolution going on that might lead to collapse later on,” explained André de Roos, a theoretical ecologist at the University of Amsterdam. 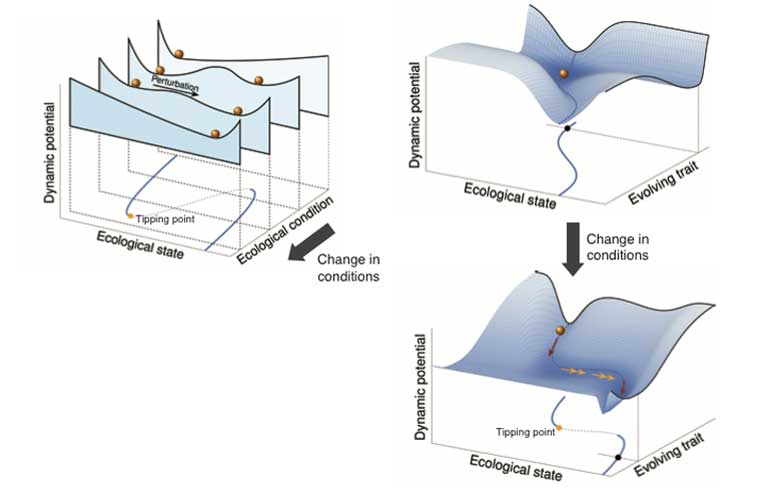 For De Roos, the pattern is observable in diverse scenarios, including the 2008 financial crisis. “It initiated in the 70s and 80s with the relaxation of bank regulations, which caused banks to start taking bigger risks,” he said. “The tipping point was in 2008, but it was a slow change in the attitude of banks towards risk-taking that eventually culminated in collapse.”

The researchers in this study looked at models where environmental changes don’t cause any immediate effect, but stir an evolutionary process into motion that will ripple outward and intensify, eventually reaching a tipping point many generations later.

“At first I was very surprised that evolution could push us over a tipping point,” says Catalina Chaparro-Pedraza, the paper’s lead author and an ecologist at the University of Amsterdam. “We need to understand how each ecosystem will react more specifically instead of generalizing so we can understand the [tipping point and collapse] process better,” she explained. “We can look at these changes as early indicators. A change now can cause the system to crash twenty years later.”

An example offered by Saatchi: colonization and the Brazilian rubber boom in decades long past may be contributing to a weaker Amazon today. “A tipping point doesn’t mean the entire system being wiped out, but that it loses its normal function, like carbon uptake.” More carbon in the atmosphere triggers further drying and more changes in rainfall regimes. All of these elements could act together to intensify the tipping point process worldwide. “We are all concerned about how vulnerable or resilient humanity is,” he adds. Though it is clear that predicting collapse with accuracy will require far more research.

Shanna is a freelance journalist who has worked with the world's top international publications. A Rio de Janeiro native, she has extensive experience in research and reporting across Brazil and Latin America with a focus on the environment, culture and social issues.

Anti-Science Republicans Like Jim Jordan Have Blood on Their Hands

END_OF_DOCUMENT_TOKEN_TO_BE_REPLACED

Stupidity reigns: A year after the deadly fact, the U.S. still has over 70,000 new COVID cases a day thanks to recalcitrant morons like Gym "What-sexual-assault?" Jordan, who spent a House hearing shrieking at Dr. Fauci about "lost liberty" and demanding, "When do Americans get their freedom back?" A weary Fauci: It's not "a freedom thing," it's "a public health thing." It finally took Maxine Waters to quash Jordan with, "Shut your mouth." Amen, auntie.
Read More...
END_OF_DOCUMENT_TOKEN_TO_BE_REPLACED