When the People Lead, Leaders Follow—Lessons From the Fight to Impeach and Remove Trump

The Senate may have betrayed the American people, but the movement for impeachment secured critical victories that will propel us forward in the longer battle for democracy.

Pro impeachment activists occupy the capitol rotunda in Washington, D.C. on May 14, 2019. (Photo: By the People/Rachael Warriner)

Without hearing from witnesses or reviewing new evidence, the Senate declared last week that our Constitution does not apply to the powerful few — effectively granting this lawless president unrestricted power. The 52 senators who voted to cover up Donald Trump’s crimes accepted the argument presented by his defense team, which is that: “If a president does something he believes will help him get elected in the public interest, that cannot be the kind of quid pro quo that results in impeachment.” As a result, these senators showed that their loyalty lies not with the American people but with a strongman. Their actions are not only a betrayal to you and me, but they put our rights and lives in danger by consenting to further abuses of power by this administration.

While this is clearly a scary and dangerous moment, there are also many reasons to be hopeful and feel powerful. I say this as someone who has been organizing in the trenches of impeachment with By the People for the past year and a half. Despite the Senate voting to cover up Trump’s crimes, our movement for impeachment secured critical victories that will propel us forward in the longer battle for American democracy. Over the course of this campaign, we built an American majority across race, gender, class, generation, geography, and political party in support of impeaching and removing Trump from office. Through months of sustained grassroots pressure and hundreds of mobilizations, we won an inquiry, got two articles, and impeached this dangerous president in the House of Representatives — all by making it a political necessity for them to act. Then, after nearly three years of unaccountability, we forced the Senate to put Trump on trial for coercing Ukraine to interfere in our elections on his behalf, and secured the first bipartisan vote in favor of convicting a president in U.S. history.

The day we stop fighting for democracy is the day we lose it.

Although we didn’t attain the 67 votes we needed, all of the Democrats plus Rep. Sen. Mitt Romney voted to convict on abuse of power and thus denied Trump the partisan vindication he’d long been seeking. Throughout the impeachment contest, we forced the conflict between democracy and authoritarianism into the open and exposed the depth of the crisis in America. Millions of people now know which political leaders will side with their rights and freedoms and which politicians are willing to sell them out to dictatorship for their own personal gain. By rising up to stop what we could not tolerate, we demonstrated that when Congress is unwilling to enforce the Constitution, the people will.

Despite being told that impeachment was politically infeasible, we made it inevitable. Rather than waiting for others to provide direction and unite the anti-Trump resistance, By the People stepped up to make what is necessary possible. We believed in, and were committed to, building a campaign that could change the whole conversation of impeachment by showing that people were willing to fight for it in the real world. Images of young people being repeatedly arrested in congressional offices simply for asking their elected representatives to do their job helped attract and shape public and political attention. These actions created space for champions to respond to the calls of an increasingly vocal movement, such as when Reps. Rashida Tlaib and Al Green introduced the first House resolution to launch an impeachment inquiry alongside us just after we’d sat in at Nancy Pelosi’s office making that very same demand.

In December, the day after we won impeachment, By the People led an occupation of Sen. Mitch McConnell’s D.C. office to demonstrate to the larger public that we were not done fighting. We also showed our allies and supporters that the best strategy for placing a difficult Senate trial on our terms was to leverage the threat of escalated mobilization. These successes and interventions created a snowball effect that encouraged many more fence-sitters to jump into the fight — contributing their resources, numbers and unique capabilities to the growing movement ecosystem. When By the People launched its campaign in August of 2018, there were few organizations actively pushing for impeachment. By February of 2020, we were partnering with dozens of national groups to demand his removal. To quote Star Wars Resistance hero Poe Dameron, “Good people will fight if we lead them.”

Obviously, however, Trump is still in office, and there are many lessons and failures to wrangle with if we are to ultimately defeat this corrupt regime. For starters, while By the People and other groups — such as Remove Trump and Swarm the Senate — understood the potency of mass direct action, we didn’t do enough to make our mobilizations match the historic moment we were facing. They simply didn’t look or sound much different from more traditional protest tactics, and we didn’t escalate to a level of mass disruption and non-cooperation as much as we should have.

The scale of mobilization for impeachment was in some ways limited by the unwillingness of some progressive or anti-Trump organizations to take the fight seriously. Every attack from this administration was confronted as a separate issue, rather than as a coordinated onslaught against our democracy. Too many leaders, funders and organizers on the left continue to view Trump’s abuses of power through a lens of politics as usual. This misdiagnosis denies the reality that Trump is actively eliminating systemic checks on his power and rigging the elections — our most basic form of asserting accountability and flexing citizen power — through voter suppression, and disinformation, as well as by coercing and soliciting foreign government interference. As a result, many saw the impeachment struggle as outside their purview and ceded the struggle in turn.

Among the organizations that did eventually join the impeachment coalition, too many preferred to follow the narrow approach of House leadership rather than unite behind a powerful and cohesive message. This failure reduced pressure on the House to pass expanded articles of impeachment for the full range of Trump’s crimes and, thus, weakened the overall argument for Trump’s removal. The family separation crisis, the Muslim Ban, Kavanaugh, the threat of war with Iran — each should have been rallying cries for impeachment and removal. 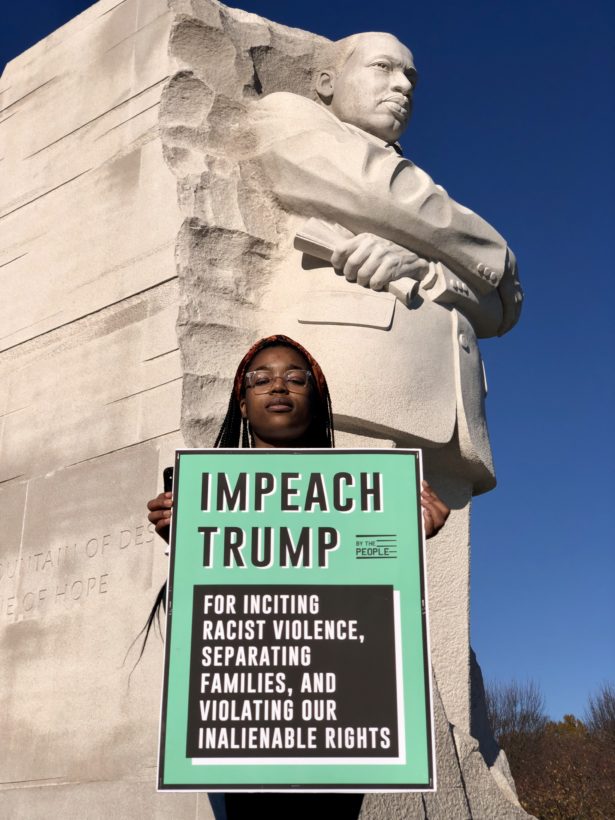 Had the actual charges against Trump condemned the full pattern of corruption, racism, misogyny and criminality — as By the People, Free Speech for People, and Women’s March (among others) long called for — it would have been more difficult for Trump’s defenders to cast the Ukraine scandal as an aberration. What’s more, it would have set a stronger precedent against future presidents committing similar Trumpian violations. All that would no doubt have fired up the larger base of people who have been resisting Trump’s attacks for three years — enabling them to see the impeachment fight as not only a priority, but a decisive and compelling critique of everything Trump has done to put Americans in danger in pursuit of his own personal gain.

Make no mistake: the acquittal of Trump shows the extent to which our institutions are failing, unable and/or unwilling to protect us from the ascent of fascism. We cannot expect action without major mobilization — when the people lead, leaders follow. Therefore, just as we did on impeachment, we, the people, must take responsibility for our lives, our liberties and our country’s future. Every American must make a choice: Will you fight for democracy or will you submit to dictatorship? Every day and every battle from this point onward is a struggle to defeat authoritarianism and to achieve a democracy that for the first time serves and represents all of us. The urgency and scale of the common threat we face requires us to continue to threaten Trump’s rule before the election and to be prepared to mobilize against him if he refuses to leave office.

We stillknow and hold these truths to be self evident: Trump was and is guilty. Impeachment and removal remains the only pathway for stopping a tyrannical president. If we are to be free and safe, then we must remove Trump from office. This fight has never been about Democrats vs. Republicans. Our trajectory must be toward transforming this political system, and removing this president will allow us to move closer to making our country’s revolutionary promise of liberty and justice for all a reality.

By the People built a grassroots campaign for impeachment and removal in service of a much larger pro-democracy movement. While the trial is over, our work remains to remove Trump and every one of his cronies and enablers from office. We will rise alongside Reps. Tlaib and Green, who responded early on to our calls to action and acted with moral courage, and we will replace those who violated their oath and betrayed their country. We will sustain our resistance to the abuses and atrocities that we cannot tolerate from this administration. We will be vigilant in securing free and fair elections. We will contest for power at the ballot box and in the streets. We will continue to call on Congress to pass articles of impeachment for all of Trump’s crimes. We will combat rising white nationalism. We will sound the alarm as Trump strives to expand his authority. The day we stop fighting for democracy is the day we lose it. Just as past Americans came together to defeat kings and Jim Crow, we will unite to make this country what it should be: a government of, by and for the people.

Anthony Torres is the Communications and Political Director of By the People, the grassroots campaign to impeach and remove Trump. He's from Long Island, NY and has been named as a Top 50 Fixer by Grist.org and as a Brower Youth Award winner.

Measuring Our Impact on the Planet

END_OF_DOCUMENT_TOKEN_TO_BE_REPLACED

Less than shockingly, persistent Mexicans have found another cheap, smart, handy way to scale Trump's "beautiful" and "impregnable" border wall. Having breached the stupidity with ladders, power tools, free climbing, at least one car and Mother Nature - a gust of wind - aspiring migrants are making camo, hook-and-ladder rigs from lightweight rebar used in building and (LOL) the wall itself. Cost: 99 pesos, or $5.34, at the Hágalo hardware store. Translation: Do It Yourself.
Read More...
END_OF_DOCUMENT_TOKEN_TO_BE_REPLACED