SUBSCRIBE DONATE
Published on
Thursday, October 10, 2019
by
Fairness and Accuracy In Reporting (FAIR)

How Ageist Is Too Ageist to Be Published?

"How old is too old" stories draw on tired prejudices that need to be challenged by reporters, not reinforced by them.

By turning these Sanders health stories into age stories, journalists drag the other older candidates into their net as well. (Photo: Headline from the Washington Post 4/9/19)

In light of Democratic presidential candidate Bernie Sanders’ recent heart procedure, media musings about candidates’ ages have come to the fore again. When an older candidate is hospitalized after experiencing chest pains (later revealed to be a heart attack), you could look at it primarily from a medical perspective, examining what this might mean for the candidate’s overall health and how worried we should be about the candidate’s ability to continue campaigning or to carry out the duties of the presidency, assuming there are no further complications—as in the Atlantic (10/2/19) or Politico (10/2/19).

A candidate’s health is important, as are sober assessments of how serious medical incidents are; it is quite common to experience a heart attack and return to normal functioning fairly quickly (former Vice President Dick Cheney famously suffered five, the first at age 37), but more information and time will be necessary to see how Sanders will recover.

On the other hand, apparently, you could spin the story into ageist musings about whether candidates in their 70s are too old to be president, regardless of the fact that the three top-polling candidates in the Democratic race—Sanders, Joe Biden and Elizabeth Warren—are all septuagenarians. (Never mind that our current president is 73 years old.) 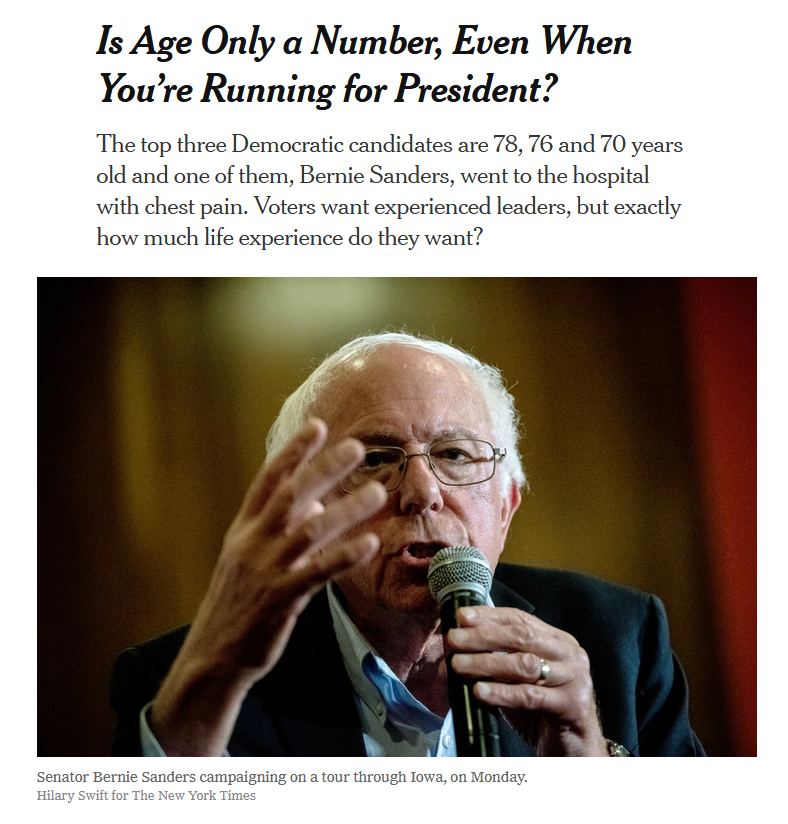 “Is Age Only a Number, Even When You’re Running for President?” wondered the headline over a New York Times piece (10/2/19) that presented the question “How old is too old?” as a campaign issue alongside things like “healthcare costs and college affordability, stagnant wages and immigration.”

“The averages paint a sobering picture,” the paper’s Lisa Lerer reported—despite the fact that population averages tell us next to nothing about an individual’s health or physical capabilities. And, as Cheney demonstrated, even politicians scarcely old enough to be president can have heart attacks. Medical experts, on the other hand, could offer useful insight. In fact, the geriatric medicine expert she interviewed rejected the premise of the article:

It’s true that rates of physical and cognitive impairment are age dependent but there’s all kind of variability…. Age should not be a disqualification for the presidency.

Then again, who needs experts when you can cite random voters drawing on their own experience? “Voters…are not sure they would want to be keeping up such a rigorous schedule in their 70s,” wrote Lerer. “Would you?”

Where one 70-year-old voter declared that “70 is the new 50,” Lerer reported that “others worry that an older commander-in-chief would share the declines they have experienced in their own physical and mental abilities over the years.”

In another Times story the same day (10/2/19), reporters suggested that Sanders’ heart procedure “could prove to be a political problem for him,” marshaling remarkably weak evidence of voter “discomfort” about candidates in their 70s: a Pew poll that found people believe the “best” age for a president would be in the 50s, and a 68-year-old voter on a portable oxygen tank who led off his comment with, “I’m not an ageist, and I never have been”—before concluding, based on his own experience, that “I think [age] does matter.” 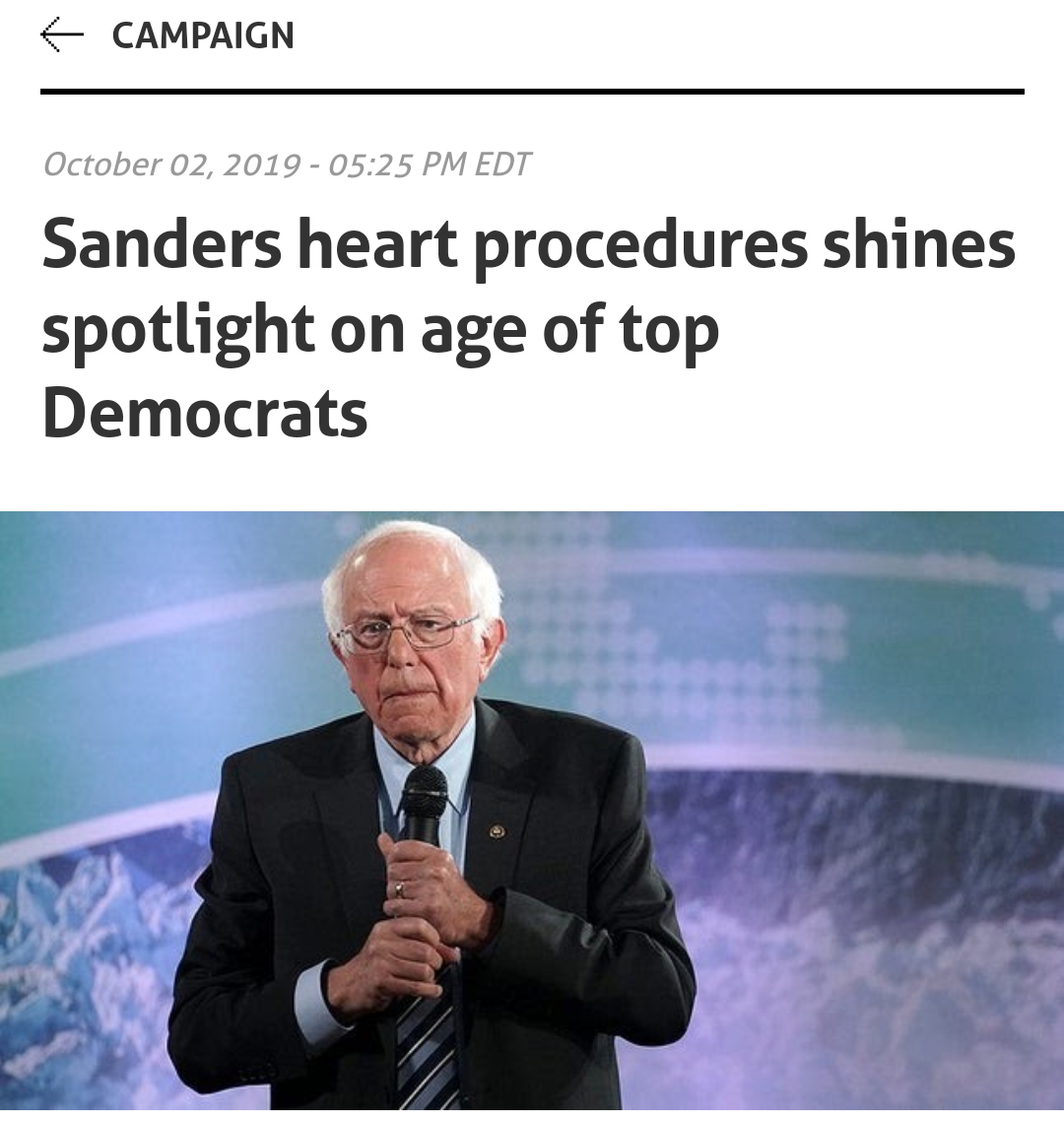 The Hill (10/2/19) went a step further, giving a “Democratic strategist” anonymity to flaunt their ageism shamelessly: “You can be a young 78 but you’re still 78. I think the Bernie news is proof of that. They’re all old. Is this really the best we could do?”

By turning these Sanders health stories into age stories, journalists drag the other older candidates into their net as well. Seventy-six-year-old Joe Biden’s “rambling discourses” (New York Times, 10/2/19), “gaffes, misstatements and sometimes meandering speeches” (Washington Post, 10/2/19) or “verbal flubs” (TheHill, 10/2/19) are included to signal that candidate’s age-related decline—which conveniently forgets that media have been reporting on Biden’s “verbal missteps” since at least 2007, when they did not attribute them to his age (Media Matters, 11/5/08). And having recently turned 70, Elizabeth Warren, who has no publicly known health issues, has begun to get lumped into these stories as well.

At the same time, reporters tend to give Trump a pass in these stories. A Wall Street Journal article (10/7/19), headlined “Sanders’ Heart Attack Brings Age to 2020 Forefront,” described leading Democratic candidates’ age as “a source for renewed concern,” but counterbalanced Trump’s status as “the oldest president at a first inauguration” by noting that he “has already been taking age-based shots at at least one potential foe.” If Trump’s septuagenarian status isn’t a concern, why should Sanders’, Biden’s or Warren’s be? 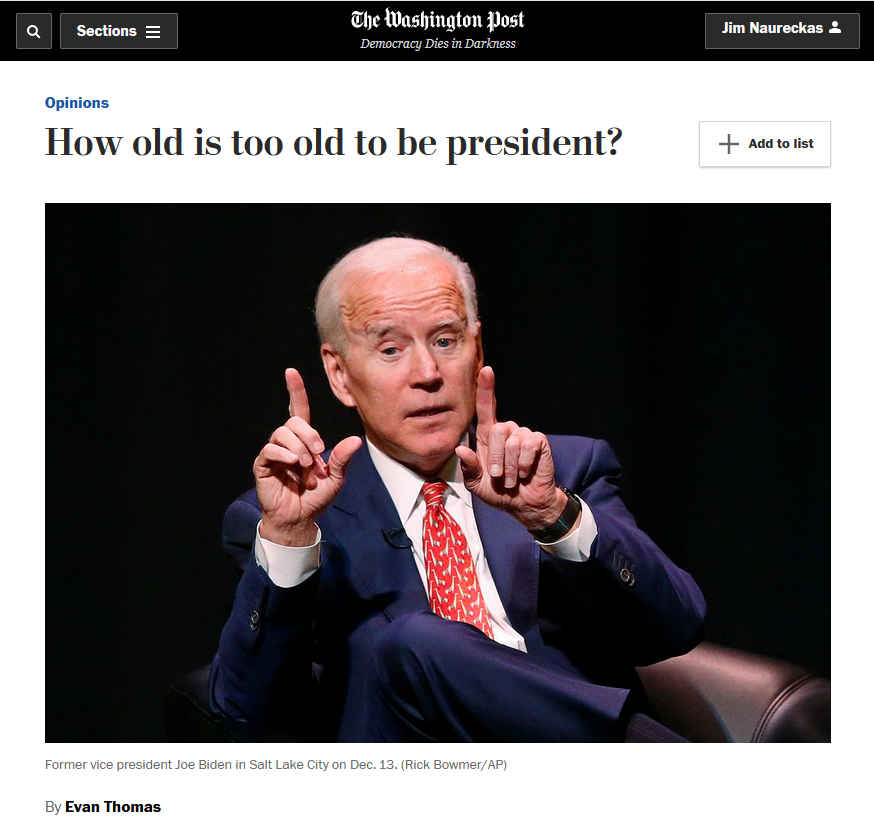 This is just the latest round of ageist election reporting, which appears to be particularly rampant at the Washington Post. Early in the race, the Post‘s (78-year-old) Richard Cohen penned a column headlined, “Joe Biden and Bernie Sanders Are Too Old to Be President” (3/18/19), while guest columnist Evan Thomas—in a piece called “How Old Is Too Old to Be President?” (1/8/19)—warned that “older people can get stuck in their ways” and “get worn out, mentally and physically, no matter how hard they try to stay vigorous and alert.”

Former Post managing editor (and septuagenarian) Robert Kaiser published an opinion piece, “Can a President Be Too Old?” (4/9/19) that, despite claiming that “ageism is forbidden…by political correctness,” and acknowledging that “any given human could function at a high level well into his or her dotage,” turned to research on averages to argue that “we are too old to be effective in the White House.”

Just as coverage wondering whether female candidates and candidates of color are "electable" serves to heighten the very stereotypes and prejudices it purports to be passively observing (FAIR.org, 7/22/19), “how old is too old” stories draw on tired prejudices that need to be challenged by reporters, not reinforced by them.

Karl Grossman
Trump Gone, But the Right-Wing Leadership Institute Promises to Keep Trumpism Alive and Well
END_OF_DOCUMENT_TOKEN_TO_BE_REPLACED
Connect With Us

END_OF_DOCUMENT_TOKEN_TO_BE_REPLACED

Like fetid sludge seeping from a storm drain, former press secretary and Wicked Witch of the Lies Sarah Huckabee Sanders is the first Trump accomplice to announce she's running for office, as governor of Arkansas. Sanders launched her bid with a gaslit, curdled, lie-filled, grievance-packed, long-ass video vowing to "defend your right to be free of socialism and tyranny" by "the radical left," and yes the ghastly woman who said it was "biblical" to put kids in cages really does talk that way.
Read More...
END_OF_DOCUMENT_TOKEN_TO_BE_REPLACED