SUBSCRIBE DONATE
Published on
Wednesday, July 24, 2019
by
Fairness and Accuracy In Reporting (FAIR)

It’s hard to escape the conclusion that the point of these person-in-the-street interviews was to give Trump supporters a platform, rather than to take a real look at what "Michigan voters" think

As we hurtle into coverage of a presidential election that is still over a year away, media have returned to their timeworn tradition of going to rural, white communities to take the pulse of the nation (FAIR.org, 5/20/19). 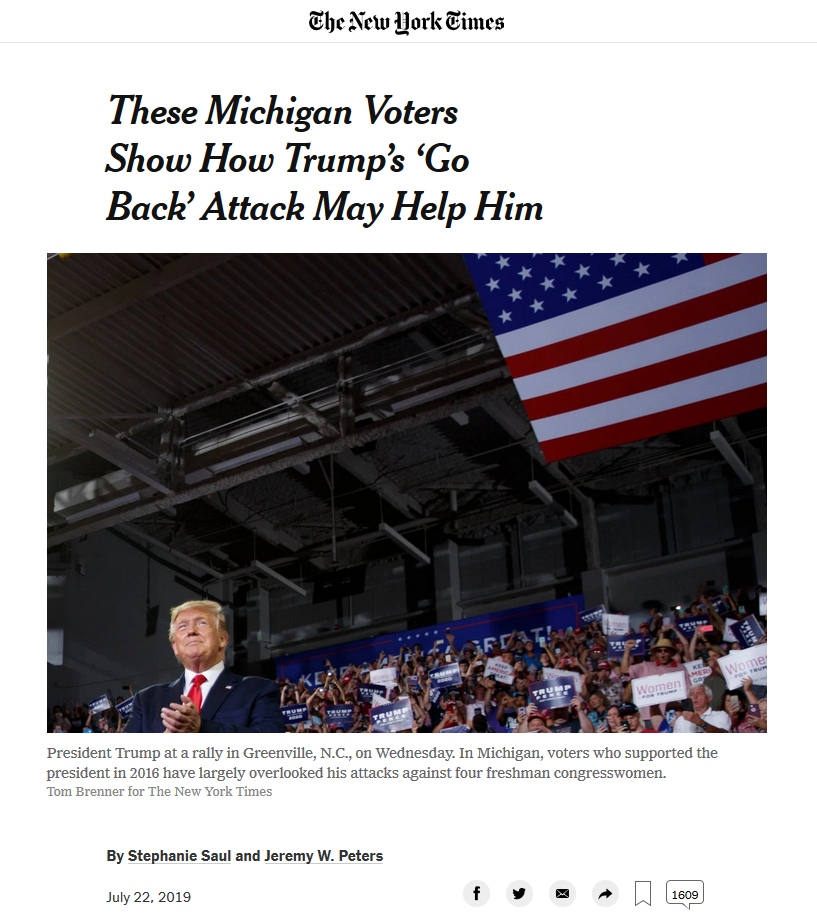 In this overwhelmingly white district an hour north of Detroit, where his popularity remains high, his comments left people in the familiar position of having to choose a side in the aftermath of another Trump-instigated outrage. And they chose his.

The article went on to talk a great deal about the importance of Michigan to the presidential election as a swing state, about counties that had swung from Obama to Trump, and about how close polls are in those counties right now. This would seem to imply that St. Clair County is one of those, where people were more ambivalent about Trump, and therefore informative about which way Michigan might go this time around. But no, St. Clair County  went for Romney by 7 points in 2012—and for Trump by 31 points.

Since this fact is disguised, and the “people” in this story seem to be exclusively of a Trumpian persuasion, it’s hard to escape the conclusion that the point of these person-in-the-street interviews was to give Trump supporters a platform, rather than to take a real look at what “Michigan voters” think. (Indeed, in Michigan as a whole, Trump’s approval rating stands at a net -15, according to Morning Consult polling—down 23 points since January 2017.)

It’s a common theme of Trump coverage that now is extending to election coverage: When people protest something Trump does or says, corporate media feel the need to also cover the people who aren’t reacting as a sort of faux-balance, giving us tautological Trump-supporters-support-Trump stories.

Reuters (7/19/19) gives us another example this news cycle: “In Battleground Florida, Republicans Shrug Off Trump’s Tweet ‘Kerfuffle.'” Reporting from Pinellas County, Florida, a Reuters correspondent joined the monthly meeting of a local Republican club—because, as the article explains:

Pinellas is one of four battleground counties that Reuters will report from through the November 2020 election to better understand the states set to play an outsized role in picking the next president.

So why, then, seek out only Republican activists to react to the Trump attacks?

As Reed Richardson pointed out two years ago here at FAIR (2/15/17), this kind of coverage tends to just reinforce right-wing talking points. Case in point from the Times‘ Michigan story: The paper interviews a local Republican strategist, who comments that the Democratic congresswomen under attack “very much represent the loony left.” This quote was then selected by a Times editor to feature in the print edition’s subhead—”Michigan Voters Who Worry More About the ‘Loony Left'”—twisting a Republican catch phrase into “voter” worries. 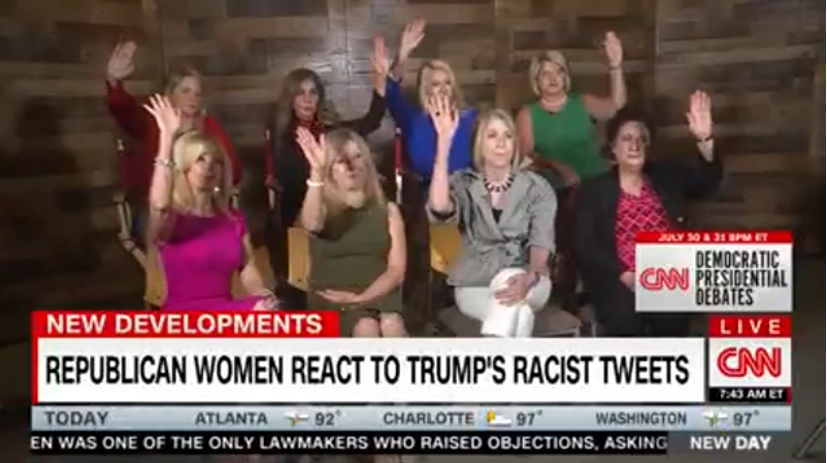 At times, the effort required to orchestrate these false-balance stories becomes embarrassingly apparent, as when CNN on July 16 and 17 aired a widely criticized segment that presented a panel of, in the words of CNN reporter Randi Kaye, “eight Republican women from Dallas [who] don’t see anything wrong with President Trump telling four Democratic congresswomen to go back where they came from.” Sharp-eyed viewers quickly pointed out that these apparently randomly selected Republican women were actually dedicated Trump activists—members of a group called Trumpettes for America who had appeared multiple times on CNN in the past, likewise identified only as Republican women.

CNN‘s response? It ran the segment again—for the fifth time—this time with a brief nod to the women’s group affiliations. Meanwhile, the underlying premise of the segment—that viewers need to hear (five times, no less) that Republicans who have supported Trump through his racist, xenophobic campaign and his racist, xenophobic administration continue to support him after his latest tirade—remains unquestioned by most media.

Bloomberg Won’t, As They Say, Play Well in Peoria, But Then, Neither Should Trump

END_OF_DOCUMENT_TOKEN_TO_BE_REPLACED

In what was a good day for rich male felon low-lifes and a "legal dumpster fire" for anyone with a lingering belief in justice, the Mobster-In-Chief offered clemency to a bunch of white-collar criminals, possibly in a test run for letting off Roger Stone, Manafort, Flynn etc. Most egregiously, Trump freed R od Blagojevich, who famously tried both to sell Obama's Senate seat and extort a children's hospital for campaign money, because "he seems like a very nice person." Up next: Hannibal Lector.
Read More...
END_OF_DOCUMENT_TOKEN_TO_BE_REPLACED