Occasionally, he hit something of substance and, more often, he just lit up the sky for a second and was gone. (Photo: Wally Mcnamee/Getty Images)

The biggest contribution to American politics made by H. Ross Perot was that he took the messianic shine off the wonders of "free trade" as it was being sold by All The Right People in the 1990s, including a Democratic President. He opened a space for politicians to examine critically NAFTA and everything that came after it without being dismissed as cranks. The worst contribution Ross Perot made to American politics was doing all that while still being Ross Perot, because Ross Perot was a crank—the biggest, loudest, richest and, yes, crankiest crank of his time.

I have only one strict rule that applies to all third-party candidates who ask me for my vote: Don't Be A Nut. And, however much right he was about that giant sucking sound of jobs fleeing to Mexico, Ross Perot was a 100-karat nut. Before he broke through into the national consciousness in 1992, Perot had been a devotee of the fiction that thousands of American POWs were still being held in North Vietnamese jails. He also believed that, because of his work in this area, the North Vietnamese government had hired the Black Panthers to kill him. He said his guard dogs chased five of the killers off his lawn. His own security people, as well as the FBI, said this never happened.

However, it was in 1992 that Perot blossomed into a national figure. The country was not entirely satisfied with the choice between President George H.W. Bush and Arkansas Governor Bill Clinton. Up stepped Perot, pie-charts and all, railing against the bipartisan consensus on trade and inveighing like an Old Testament prophet against The Deficit. (That he scared the Democrats into deficit hawkery for the next two decades is his second-worst contribution to American politics.) And he got people listening to him; he was a third-party candidate who actually got on the ballot in all 50 states.

The reasons, he said, were personal. The Republicans were seeking to disrupt his daughter's upcoming wedding by spreading unsubstantiated rumors about her being gay. While not being as loony as Huey Newton on the veranda, this was strange enough. In truth, however, his campaign was devolving at a rapid pace. Perot refused to listen to anyone but himself. He winged it in speeches, memorably referring to the attendees at the NAACP's annual convention as "you people," and shed staffers who complained about the chaos. America simply wasn't ready to elect a president on this basis. That would have to wait until 2016.

And then, on October 1, Perot announced he was back in the race, surrounded this time by loyalists and Perot family retainers. 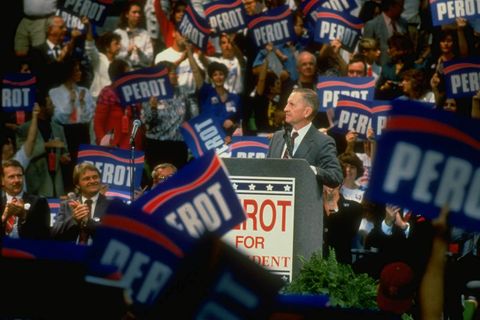 His campaign consisted only of a smattering of rallies and his appearances in the presidential debates. Mirabile dictu, after the three debates were over, and after having turned his campaign into an utter circus, he was polling ahead of both Clinton and Bush. Ultimately, of course, he finished with almost 19 percent of the vote, good enough only for third place, but also the highest percentage of votes garnered by a third-party candidate since Theodore Roosevelt ran on the Bull Moose ticket in 1912.

The man was a lightning bolt, striking randomly. Occasionally, he hit something of substance and, more often, he just lit up the sky for a second and was gone. But he helped to change the Democratic Party on economics, and not entirely in a good way, but in a direction that most of the presidential candidates of 2019 still are trying to reverse. And, at least at its beginning, the current president*'s campaign owed a lot to the way Perot ran for the office. Few people in the past several decades have changed American politics as much as did H. Ross Perot, dead on Tuesday at 89. And he did it while still being a nut, which, dammit, is such an American thing to do.

END_OF_DOCUMENT_TOKEN_TO_BE_REPLACED

As thousands pay tribute to Ruth Bader Ginsburg, the first woman, and Jew, to lie in state, we seek to find light where we can amidst the grief, dread, fury, rubble. There's resolve to Block Barrett. There's hard truth: "When the people speak, the Court listens," and they'll only save us if we fight for it. And there's the kids, heartbreaking and uplifting and reverential in their RBG collars, who with their parents came to honor " what America should be," and who give us hope.
Read More...
END_OF_DOCUMENT_TOKEN_TO_BE_REPLACED