For many years, Aung San Suu Kyi was a hero in the West. Through a long period of house arrest, her lonely battle for freedom and democracy in Myanmar made her almost as great an icon as Nelson Mandela. In 1991, she was awarded the Nobel Peace Prize outright; Mandela shared it two years later.

But times have changed. Since becoming the state counsellor of Myanmar, she has become the most visible political apologist for the ethnic cleansing – I would say genocide – of an estimated 25,000 Rohingya Muslims in the violence that swept across the country in 2017.

A further 700,000 were driven from their homes. Security forces have been accused by human rights groups of the systematic rape of Rohingya women and girls.

Yet, Aung San Suu Kyi believes Myanmar has done nothing wrong. This became plain after her gruesome meeting on Wednesday with Hungarian Prime Minister Viktor Orban in Budapest.

A statement released after the meeting noted that the two leaders had a great deal in common. In particular, they agreed on “the emergence of the issue of coexistence with continuously growing Muslim populations”.

Both Orban and Aung San Suu Kyi subscribe to versions of the noxious 'clash of civilisations' thesis expressed by American academic Samuel Huntington in the 1990s. For Orban, Christianity is Europe’s last hope in the face of Islamic expansion, and Hungary is the final line of defence. This has led to Orban targeting Muslim migrants, repeatedly referring to them as terrorists.

The Buddhist Aung San Suu Kyi and the Christian Orban are an integral part of a cross-continental political movement that views Islam as a mortal threat.

For Aung San Suu Kyi, Islam represents an existential threat to the Buddhist culture of Myanmar. As early as 2013, she was criticised for denying the ethnic cleansing of Muslims in the region, blaming the violence on a “climate of fear”.

The West was so eager to support Aung San Suu Kyi in her battle against the generals of Myanmar’s military dictatorship that it ignored the signs of her subscription to the Buddhist nationalism that has manifested itself so brutally in the last few years.

The Buddhist Aung San Suu Kyi and the Christian Orban are an integral part of a cross-continental political movement that views Islam as a mortal threat to the countries they lead. It’s a sentiment embraced by Xi Jinping’s China, which is currently carrying out a cultural genocide against the Uighurs of East Turkestan.

The situation is worryingly similar in Narendra Modi’s India, where more and more Muslims are facing a level of persecution not seen since independence. 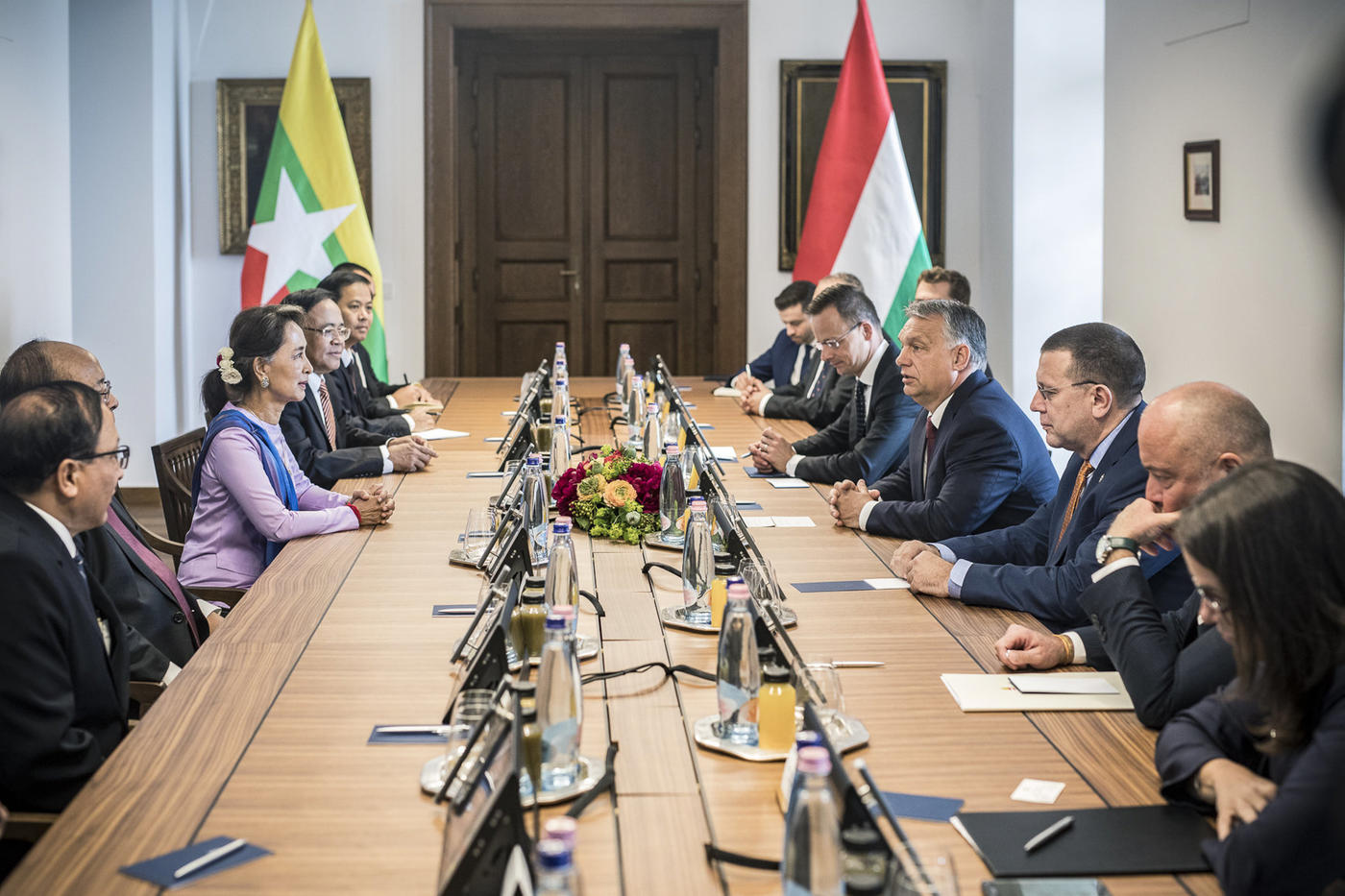 This coming-together of Orban and Aung San Suu Kyi raises significant questions for the rest of us. It’s become the default language of right wing and nationalist regimes to attack their Muslim minorities. Imprisonment, killing and torture has been justified by the idea that all Muslims are an enemy within, embodying the existential threat of Islam.

The same anti-Muslim language can be heard within Britain’s ruling Conservative Party, as well as the right wing Brexit Party and the remains of UKIP. It’s common parlance among far-right parties on the European continent, and it is a horrible perversion of the truth.

Then, of course, there is US President Donald Trump. His calls for a ban on Muslims entering the US, and his general anti-immigration agenda, are almost identical to the views of Orban.

And the two were full of praise and admiration for each other when Orban visited the White House last month. The support for Trump among Myanmar’s vehemently anti-Muslim monks is also well documented.

The supposed threat of Islam to the West is a myth.

Millions of Muslims have settled in the West to enjoy the benefits of Western life, and to contribute as workers, entrepreneurs and citizens.

Millions more are campaigning for the best of Western values: freedom of thought and expression, the rule of law, and equality of opportunity, in the face of obscurantism.

Yet, the latest spectacle of the meeting between Aung San Suu Kyi and Orban should act as an important reminder of the monstrous threat posed to Muslims around the world. If anyone is under threat it’s the Rohingya in Myanmar, the Muslim migrants in Hungary, and the hundreds of thousands of Uighurs still being held in detention camps.

Less than 25 years ago, more than 8,000 Muslim Bosnians were killed in the Srebrenica massacre. The Bosnian Serb perpetrators of this travesty saw their actions as a defence of their national and ethnic identity. Others continue to deny the genocide even took place.

The army commander who carried out the genocide at Srebrenica was Ratko Mladic, otherwise known as the “Butcher of Bosnia”. He was finally convicted of the genocide and sentenced to life imprisonment two years ago. But when he was first brought to court in 2011, these were his words: “I defended my people and my country.”

How much longer must we listen to world leaders use this same chilling language against Muslims, before we begin to challenge their falsehoods and myths?

Peter Oborne is the former chief political commentator of the Telegraph and reports for Channel 4's Dispatches and Unreported World. He has written a number of books identifying the power structures that lurk behind political discourse, including The Triumph of the Political Class. He is a regular on BBC programs Any Questions and Question Time and often presents Week in Westminster. He was voted Columnist of the Year at the Press Awards in 2013.

I've Made Up My Mind: The US Senate Must Abolish the Filibuster
More in:
World, War & Peace
,
Racism, Hungary, Myanmar, Human Rights, India

Michael Winship
Same Old, Same Old from the Mouth That Roared
END_OF_DOCUMENT_TOKEN_TO_BE_REPLACED
Connect With Us

END_OF_DOCUMENT_TOKEN_TO_BE_REPLACED

Banksy's newest, a two-fer Oscar Wilde tribute and call for prison reform, shows a prisoner climbing down bedsheets ending in a typewriter from Reading Gaol, known for housing Wilde during his two years' hard labor for "gross indecency" - being gay. Video juxtaposes Banky creating it with TV artist Bob Ross burbling about freedom; both are haunted by Wilde's final searing poem about the cruelty and bleakness of life behind bars: "Something was dead in each of us/and what was dead was hope."
Read More...
END_OF_DOCUMENT_TOKEN_TO_BE_REPLACED