SUBSCRIBE DONATE
Published on
Tuesday, April 09, 2019
by
Fairness and Accuracy In Reporting (FAIR)

In addition to questioning the motives of the accusers and victim blaming, media analysts have invented reasons to excuse his behavior

Whoopi Goldberg said that she doubted Flores for not immediately saying something to Biden. (Photo: Screenshot)

As women come forward to accuse former Vice President Joe Biden of inappropriate touching, some media have responded by scrutinizing their political motives. 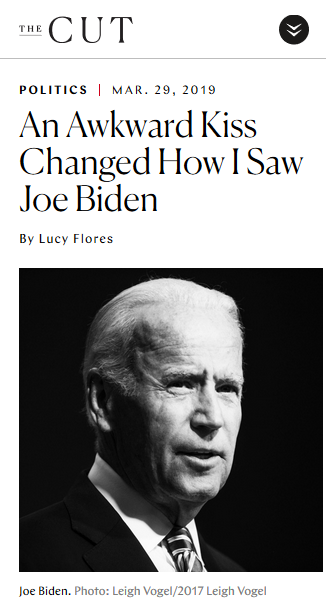 Former Nevada Assemblymember Lucy Flores described in an essay for New York magazine’s The Cut (3/29/19) how in 2014 Biden put his hands on her shoulders, smelled her hair and slowly kissed the back of her head. Since Flores spoke out, six other women have come forward to say that Biden touched them in ways that made them feel uncomfortable.

Shortly after Flores explained to CNN’s Jake Tapper (3/31/19) that Biden made her feel “shocked” and “powerless,” Tapper questioned her politics. He asked Flores to explain her political motivations, mentioning that she supported Bernie Sanders for president in 2016, and recently attended a Beto O’Rourke rally.

“I would say politics was definitely the impetus,” Flores answered. “The reason why we’re having these conversations about Vice President Joe Biden is because he’s considering running for president.”

“Did you have any conversations about what happened with any presidential campaign before you wrote that piece for The Cut?” Tapper followed up.

Biden’s creepy behavior has been written about for years, but apparently video evidence, combined with his poor record on abortion and his 1991 interrogation of Clarence Thomas accuser Anita Hill, is not enough information for pundits to determine whether Biden could in fact have some issues with accepting women as actual people with bodily autonomy.

On ABC’s The View (4/1/19), Whoopi Goldberg said that she doubted Flores for not immediately saying something to Biden, dismissing the idea that the power dynamic between a vice president and a state lawmaker could discourage someone from speaking up:

It would have been nice if she would have turned to him and said, “You know what, J, I don’t really like this.”…  Something, cause he’s standing right there.

Goldberg engaged in classic victim-blaming logic: “If someone makes you uncomfortable, tell them.” She added: “Don’t sit and wait and say ‘I’m uncomfortable’ on national television, because it makes us suspect of your thoughts.”

Jonathan Capehart, an opinion writer at the Washington Post (4/2/19) who wrote that Biden had touched him and it was OK, cast doubt on Flores on MSNBC’s AM Joy (3/31/19). Capehart said that he “was wondering, you know, people were talking about Vice President Biden going for the Democratic nomination in 2016, so why not come out then?”

There is a very simple answer to Capehart’s disingenuous question, which is that the last time Biden was considering running for president, the #metoo movement had not started yet. This context does not diminish what Flores is saying; rather, it makes her point stronger, because it’s clear that this more nuanced conversation would not be happening without all the other people who have already come forward to demand accountability from politicians, celebrities and CEOs for the way their actions have caused harm. 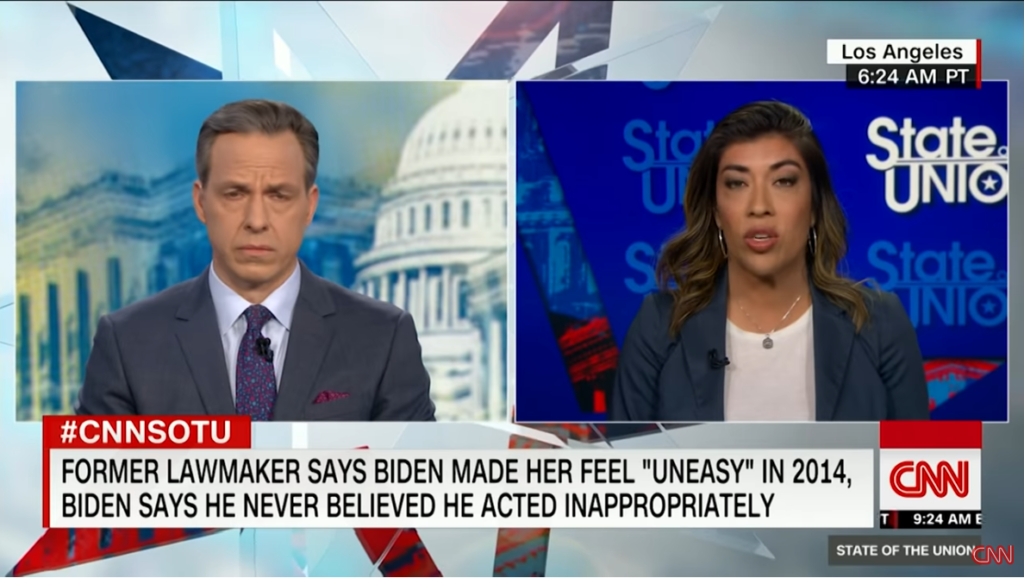 Frankly, on a much larger scale, we also need to have a conversation about powerful men feeling that they have the right to invade a woman’s space whenever they’d like. This really is about women feeling like we have agency.

Analysts have been clear to point out that no one has accused Biden of sexual harassment, but what’s missing is an understanding of the way that inappropriate behavior toward women can impact women’s political advancement or even exclude them from a career.

Like Flores, the woman who came forward to say that Biden touched her inappropriately when she worked in his Senate office in 1993 (Nevada County Union, 4/3/19) has experienced media scrutiny for her political opinions. Alexandra Tara Reade explained that when she spoke up to Senate personnel about her concerns, Biden retaliated. She was unable to get another job on the Hill, changing the trajectory of her career. “My life was hell,” she said.

Edward-Isaac Dovere, a staff writer at The Atlantic, tweeted that Reade had previously written about her love of Russia and, given this, questioned whether her account of the blacklisting was accurate. The implication of Dovere’s line of thinking is that certain people are only entitled to personal space or careers if they have the correct opinion on Vladimir Putin:

latest woman to accuse Biden of touching her inappropriately - https://t.co/GY8BNSsOtI - wrote in December: "I love Russia with all my heart ... President Putin scares the power elite in America because he is a compassionate, caring, visionary leader." https://t.co/gzbhSRps43

Some of those given space in corporate media to defend Biden have taken it upon themselves to do so on their children’s behalf. The Washington Post (3/31/19) asked Sen. Chris Coons (D.-Delaware) to speak for his daughter Maggie about a 2015 incident in which Biden was filmed kissing the then-13-year-old’s forehead and whispering in her ear.

“She did not think of it as anything,” Coons said. “All three of my kids have known Joe their whole lives.”

Although it seems journalistically irresponsible—not to mention paternalistic—to assume that Coons would accurately represent his daughter’s opinion, it’s clear from the video, where Maggie grimaces and moves away from Biden, that she isn’t having a good time. 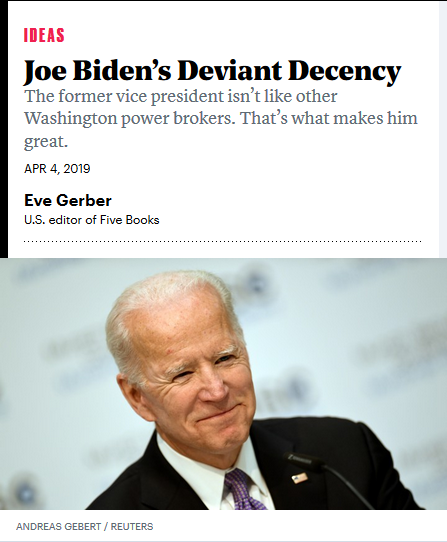 A main defense of Biden is that there have been occasions where he did not cross a line, as if that invalidates the times when he did. Eve Gerber, whose husband, economist Jason Furman, was a top Obama administration appointee, wrote an essay for The Atlantic (4/4/19) to say that, actually, Biden is an “unusually good” man. Alongside photos of her young son and daughter with Biden, Gerber argued that he was “touchy-feely with everyone,” and her kids loved it.

whether the real problem is “millennial snowflakes,” out-of-control political correctness, and a zealous neo-Puritanism that can’t even take a joke or see an affectionate gesture for what it is.

Calling Biden “old-school,” Yglesias builds on the false idea that Biden’s line-crossing has some kind of legitimacy as a vestige of an earlier time. The common narrative that the #metoo movement is generational is inaccurate. It erases older feminists like Biden accuser D.J. Hill, while also suggesting that some people should be allowed to behave inappropriately because of their age.

Defenses for Biden don’t necessarily follow a logical path. In addition to questioning the motives of the accusers and victim blaming, media analysts have invented reasons to excuse his behavior. At CNN (4/3/19), historian Douglas Brinkley brought up Biden’s cancer advocacy work.

“He’s been doing a cancer moonshot, and he’s talking to people that are afflicted with cancer a lot, and he grabs them a lot,” he said.

None of the accusers met Biden under these circumstances. And if they did? Cancer patients have boundaries, too.

Naomi LaChance has written for local newspapers such as the Berkshire Eagle and the Poughkeepsie Journal as well as national outlets including NPR, the Intercept, TYT Network, and the Huffington Post. Her articles have also appeared in the New England Center for Investigative Reporting and Dame Magazine. She is interested in institutional corruption, ideological hypocrisy, and labor rights. Currently living in Washington, D.C., she graduated from Bard College in 2016 with a degree in nonfiction writing and historical studies.

Lawrence Mishel, Jori Kandra
Over Last 30 Years, Wages for Top 1% Soared by 160% While Wages of Bottom 90% Actually Went Down
END_OF_DOCUMENT_TOKEN_TO_BE_REPLACED
Connect With Us

END_OF_DOCUMENT_TOKEN_TO_BE_REPLACED

Oh dear, the Who Gives A Fuck About Christmas Wit ch has done it again. Cue a vacant-eyed, stiletto-heeled Melania strolling a White House packed with blinding, sparkling, twinkling, gazillion-dollar displays like a woman who got lost looking for the bathroom in a strange museum to "pay tribute to the majesty of our great Nation," now convulsed by death, fear and poverty thanks. She wishes us a season "overflowed with love, joy, peace, hope, and faith." Like she said, give us a fucking break.
Read More...
END_OF_DOCUMENT_TOKEN_TO_BE_REPLACED