Are You Black, White or Human?

The problem is race itself—a bogus concept of division

“I’ve been trying to come up with an idea to solve America’s race problem for over 25 years,” he told me. “Could I use what I learned in advertising?”  (Photo by Chip Somodevilla/Getty Images)

Some of my best friends are colored. All of them are, actually. 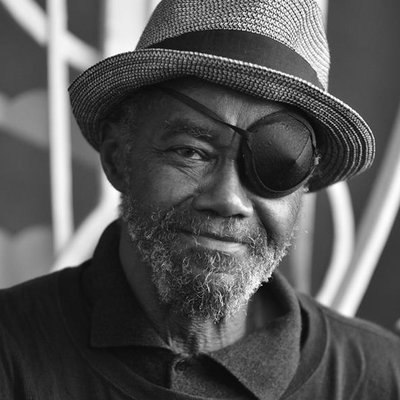 And so I introduce you to Lowell Thompson, artist — indeed, psycho-realist, as he calls himself — recovering ad man and “colored person.” He’s also, you might say, the king of irreverence and political incorrectness, but this is only because he’s also a dragon slayer. The dragon is racism. There’s no way to engage with race politely, but there’s a way to yank the seriousness out of it.

What race are you? What color are you? Race is the American divide, a border wall deeper and more profound than the one Donald Trump wants to build. Cultures merge and evolve, but race — “color” — remains impenetrable, a line more fundamental, it would appear, than humanity itself.

"The greatest ad campaign in American history was for American racism: By branding Africans as subhumans, it justified the slavery that America’s success is based upon. My job now is unselling racism."

Thompson had a revelation about this some years ago, with the help of the profession to which he had devoted his life: “The key to understanding the race problem is one word: branding,” he said in a 2014 interview. “Not only were cattle and slaves branded, but America became the world leader in branding through advertising. And the greatest ad campaign in American history was for American racism: By branding Africans as subhumans, it justified the slavery that America’s success is based upon. My job now is unselling racism.”

In his determination and commitment to do so, Thompson has given his life over to creating transformative change. Martin Luther King called it “creative altruism”: deconstructing the walls that divide, undoing institutional prejudice and unfairness. He has become, in the process, part of the bubbling cauldron of social evolution.

Thompson, who is African-American, grew up in Chicago’s Robert Taylor Homes. He was a kid who loved to paint and found his way into one of the city’s major ad agencies when he was a young man. This was in the late ’60s; doors were opening, thanks to the civil rights movement. But the opening was fleeting. By the early ’90s, there were almost no African-Americans left in the business. He told me one of his memories from those days. The receptionist at one of the agencies where he was then freelancing challenged his presence in the office: “Aren’t you the mailroom guy?”

Finally he had to address the situation. He did his research and wrote an article called “The Invisible Man in the Gray Flannel Suit.” That was the beginning of his transition to political activism.

“I’ve been trying to come up with an idea to solve America’s race problem for over 25 years,” he told me. “Could I use what I learned in advertising?”

Turns out the answer was yes. The first thing an ad has to do is capture attention, grab people by surprise, pull them in. An irreverent sense of humor also helps, along with an ability to see through and beyond the basically unquestioned social realities that shape our lives.

Thus, as Thompson began to see it, confronting and eliminating racism in American society wasn’t simply a matter of moral scolding. This is called political correctness: demanding, pleading for, better behavior from white people in positions of power toward non-white people in positions of vulnerability. As he saw it, the problem is race itself — a bogus concept of division.

He decided to take on the concept, to challenge the idea that the “color of one’s skin” was a natural division among people, a reasonable igniter of distrust . . . and that, my God, all the human occupants of Planet Earth were one of five colors — black, white, yellow, brown or red — and those colors negated their complexity as human beings. This offended him not just as a man but as an artist.

And this is where the irreverence started coming in. Race was simply too absurd to take seriously. So, in the mid-’90s, when he wrote a book called White Folks: Seeing America Through Black Eyes, he decided to step over the PC line. He devised an ad campaign for the book announcing, simply, “White Folks for sale.”

Oops! Way too funny, and way too non-PC. A local radio station refused to run the ad. We can use sex and violence to sell products, but we dare not stir up the horrors of American history.

Are you black, white or human? A box next to each option contains the appropriate color. Only one of them makes sense.

Flash forward a couple of decades and Lowell Thompson is walking through a Barnes and Noble store. He notices a large display of adult coloring books and realizes these are a thing now — and suddenly another politically incorrect idea pops into his head. He decided to create a coloring book. The title would be: “Some of My Best Friends Are Colored.”

Thompson has pursued the project through hell and high water, you might say. Shortly after he came up with the idea, “I almost died,” he told me. His blood had stopped coagulating at one point, he collapsed on a public street and was rushed to a hospital. They saved his life and he was able to push on with the project, which includes holding public events in which participants get a chance both to color and talk about race. A flyer he passes out asks: Are you black, white or human? A box next to each option contains the appropriate color. Only one of them makes sense.

Initially the project was funded by a charitable foundation, but, oops again, the word “colored” proved to be too controversial to higher-ups in the organization and they backed off, and he has pursued it on his own.

The irreverence and the crayons are both central. With both, he’s reaching, I believe, for a child’s openness and sense of possibility. We can’t free our thinking until we let go of what we know.

In Indian Country, It’s Not the Weather, It’s the Racism That’s Leaving Thousands in the Dark

Sunshine for All: Closing the Solar Energy Gap

Robert Reich
Senate Democrats Can and Must Abolish the Filibuster. Now.

Sam Pizzigati
The Average American Pays Tax on Over Half Their Wealth. Shouldn't the Very Rich Do the Same?

END_OF_DOCUMENT_TOKEN_TO_BE_REPLACED

It's been little noted, but while the impeached guy and his CPAC fans feverishly parroted The Big Lie - "You won!" - the wheels of justice have been steadfastly quashing the morons who tried to dismantle democracy to prove it. Over a dozen more rioters were just indicted on multiple counts - each worth up to 20 years prison time - for a total of about 270. Video emerged of the FBI nabbing one livid guy who yelled "what the fuck?!" - ironically, like many of us watching these yahoos in action.
Read More...
END_OF_DOCUMENT_TOKEN_TO_BE_REPLACED