How Do You Tell the Kids that Grandma is in Jail for Resisting Nuclear Weapons?

“Our grandma is in jail,” Madeline tells a woman wrestling a shopping cart at Target.

“She went over a war fence and tried to make peace,” Seamus adds helpfully. “They arrested her, and she is in jail now.”

“Where?” the woman asks, looking from them to me in disbelief and maybe pity.

“We don’t remember,” the kids say, suddenly done with their story and ready to make passionate pleas for the colorful items in the dollar section over the woman’s shoulder.

“Georgia,” I say, but I don’t have a lot of energy to add detail to my kids’ story. They hit all the high points.

“There’s a lot going on these days,” she says. I agree, and we move on into the store and our separate errands.

I was happy not to say more at that moment, happy to avoid a sobbing breakdown at Target, happy to wrestle one little bit of normal out of a very abnormal day.

My mom, Liz McAlister, who turned 78 in November, had been arrested deep inside the King’s Bay Naval Base in St. Mary’s, Georgia in the early hours of Wednesday morning. Along with six friends, she carried banners, statements, hammers and blood onto the base. They started their action on April 4: the 50th anniversary of Martin Luther King’s assassination.

Their statement made connections between nuclear weapons, white supremacy and deeply embedded racism. It is a long statement, but given that they were carrying it into a free-fire zone — where military personnel are authorized to use deadly force — there was no particular need for brevity: “We come to Kings Bay to answer the call of the prophet Isaiah (2:4) to ‘beat swords into plowshares’ by disarming the world’s deadliest nuclear weapon, the Trident submarine. We repent of the sin of white supremacy that oppresses and takes the lives of people of color here in the United States and throughout the world. We resist militarism that has employed deadly violence to enforce global domination. We believe reparations are required for stolen land, labor and lives.”

They walked onto King’s Bay Naval Station just hours after Saheed Vassell was shot and killed in a barrage of bullets by New York City police officers, just hours after hundreds of demonstrators filled the streets of Sacramento for another day, shouting “Stephon Clark, Stephon Clark, Stephon Clark” and demanding accountability after the young father of two was killed by police officers on March 18. These seven white activists know that when you are black in this country, your own corner, your grandmother’s own backyard, is a free-fire zone more dangerous than any military base.

There is indeed a lot going on these days.

The statement continues: “Dr. King said, ‘The greatest purveyor of violence in the world (today) is my own government.’ This remains true in the midst of our endless war on terror. The United States has embraced a permanent war economy. ‘Peace through strength’ is a dangerous lie in a world that includes weapons of mass destruction on hair-trigger alert. The weapons from one Trident have the capacity to end life as we know it on planet Earth.” 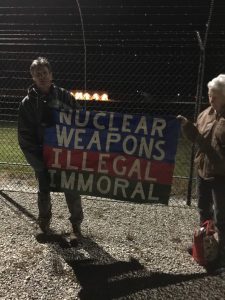 Kings Bay is the largest nuclear submarine base in the world at about 16,000 acres. It is the home port of the U.S. Navy Atlantic Fleet’s Trident nuclear-powered submarines. There are eight in total, two guided missile submarines and six ballistic missile submarines. These submarines were all built in Groton, Connecticut — right across the river from our home in New London. Each submarine, my mom and her friends assert, carries the capacity to cause devastation equivalent to 600 of the nuclear attacks on Hiroshima, Japan.

“Nuclear weapons kill every day through our mining, production, testing, storage and dumping, primarily on indigenous native land. This weapons system is a cocked gun being held to the head of the planet. As white Catholics, we take responsibility to atone for the horrific crimes stemming from our complicity with ‘the triplets’ [of evil]. Only then can we begin to restore right relationships. We seek to bring about a world free of nuclear weapons, racism and economic exploitation.”

That is not the end, you can read the whole statement and their indictment of the United States on their Facebook group.

These sorts of actions — called Plowshares — have a nearly 40-year history, since my father and uncle and six others broke into the King of Prussia plant in Pennsylvania in 198o to “beat swords into plowshares.” They struck at nosecones with hammers and marked the weapons with blood to reveal the human costs and mess and suffering the weapons are built to wreak in the world.

My father participated in five of these Plowshares actions in his lifetime and helped organize countless others. Committed conspirers, steeped in active nonviolence, have carried out more than 100 of these actions since 1980. This is my mom’s second action. She and her current co-defendant Clare Grady, were part of the 1983 Griffiss Plowshares in upstate New York.

My parents estimated that they spent 11 years of their 27-year marriage separated by prison, and it was mostly these actions that kept them apart and away from us. Countless life events in our family — birthdays, graduations, celebrations of all kinds — were stuttered by the absence of one of our parents. I say this with pain and loss, but no self-pity. Dad was able to attend my high school graduation, but not my brother’s. We went straight from my college graduation to visit my dad in jail in Maine. I missed all the raging keggers, sweaty dance parties and tearful goodbyes that marked the end of college for my friends to sit knee-to-knee with my father in a cramped and soulless room. On chairs designed for maximum discomfort, I tried to share my momentous day and all my 22-year-old big feelings while ignoring the guards and the room crowded with a dozen others doing the same thing. We wrote thousands of letters. They often crisscrossed each other so that there was a constant weaving of story and sharing across the miles.

So, when I explained that grandma was in jail to my kids — 11-year-old Rosena, 5-year-old Seamus and 4-year-old Madeline — I felt the weight of a lifetime of missing and provisional family experiences, frequently lived in prison visiting rooms and through urgently scrawled letters.

I tried to figure out a way to talk to them that would make sense and, in thinking it through, I realized that none of this should make sense to anyone! Nuclear weapons? Absurd! Police brutality and white supremacy? Senseless! Plowshares actions with their symbolic transformation and ritual mess-making? A foolhardy act of David versus Goliath proportions!

So, I didn’t try to make it make sense. I just forged ahead, grateful that they had some context: We had participated in the Good Friday Stations of the Cross organized by Catholic Worker friends at our local submarine base a few days earlier, and — the night before — we had gone to hear a dramatic reading of Dr. King’s “Letter from a Birmingham Jail.”

“Hey guys, know how we went to the sub base on Friday? Grandma was arrested in a place like that late last night. She is in jail now. She and her friends broke onto the base to say that nuclear weapons are wrong. Remember how Dr. King talked about just and unjust laws?” They nodded and remembered that King said “one has a moral responsibility to disobey unjust laws.” I told them that Grandma thinks that nuclear weapons — things that can destroy so much life on our planet — shouldn’t be built and protected and paid for when so many people are hungry, so many kids don’t have good schools to go to, so many people don’t have good homes. I went on and on.

“Wait, these nuclear weapons … They are war things?” Seamus asked.

“Good for grandma,” he said, and that was the end of our serious conversation.

Mom and her friends are charged with misdemeanor criminal trespass and two felonies: possession of tools for the commission of a crime and interference with government property.

The kids and I didn’t talk about the kind of jail time that could mean for their grandma. It is all I am thinking about right now, but they moved on, imagining out loud and with a lot of enthusiasm how grandma got by the attack dogs and police officers they had seen at the Groton Submarine Base. They were sure there was a similar set up in Georgia. “Grandma needed a ladder and a cheetah,” said Madeline. “A cheetah is the only animal that can outrun dogs and police officer’s bullets.”

I am pretty sure no cheetahs were involved in the Kings Bay Plowshares, but I am happy my daughter sees her grandmother as a fierce and powerful anti-war activist astride a wild cat.

Frida Berrigan, a columnist for WagingNonviolence.org, serves on the board of the War Resisters League and organizes with Witness Against Torture.

"Our Planet, Our Future"—Another Desperate Plea for Humanity to Wake Up

Fight for $15, Undeterred by McDonald's Raises for Some Workers, Says US Strike Still On for May 19

Diane Ravitch
Jan Resseger: Will the Biden Administration Revive the Failed Policies of NCLB and Obama?
END_OF_DOCUMENT_TOKEN_TO_BE_REPLACED
Connect With Us

END_OF_DOCUMENT_TOKEN_TO_BE_REPLACED

In the latest manifestation of a savage Gaza strategy they call "mowing the grass," Israel has killed from the aloof air at least 212 Palestinians. They include 61 children, 36 women, two doctors, 10 members of one family, 17 of another from age six months to 84 years, and Ahmed al-Mansi, who'd just posted a loving, heartrending video of going to the market to buy toys to soothe his three "sad" kids, jittery from the bombings. "Don't worry," he says as planes rumble above. "Keep playing."
Read More...
END_OF_DOCUMENT_TOKEN_TO_BE_REPLACED