SUBSCRIBE DONATE
Published on
Thursday, January 18, 2018
by
Fairness and Accuracy In Reporting (FAIR)

"According to the Association for Civil Rights in Israel, Palestinians in the occupied West Bank are subjected to a military court system that “does not grant the right to due process and the rights derived from it,” whereas Israelis illegally colonizing the Occupied Territories have the rights and privileges of a civilian legal system." (Photo: Jordi Bernabeu Farrús/Flickr/cc)

Israeli soldiers shot 14-year-old Palestinian Mohammad Tamimi point-blank in the face with a rubber-jacketed bullet on December 14, 2017, in Nabi Saleh, a small village in the occupied West Bank. The boy had to undergo six hours of surgery and was placed in a medically induced coma.

Ahed has been denied bail and could face years in prison. (Nour Tamimi, a 16-year-old cousin of Ahed’s who is also in the video, was also arrested and has been released on bail. Ahed’s mother Nariman was arrested later that day when she inquired about her daughter, and she remains in custody.) 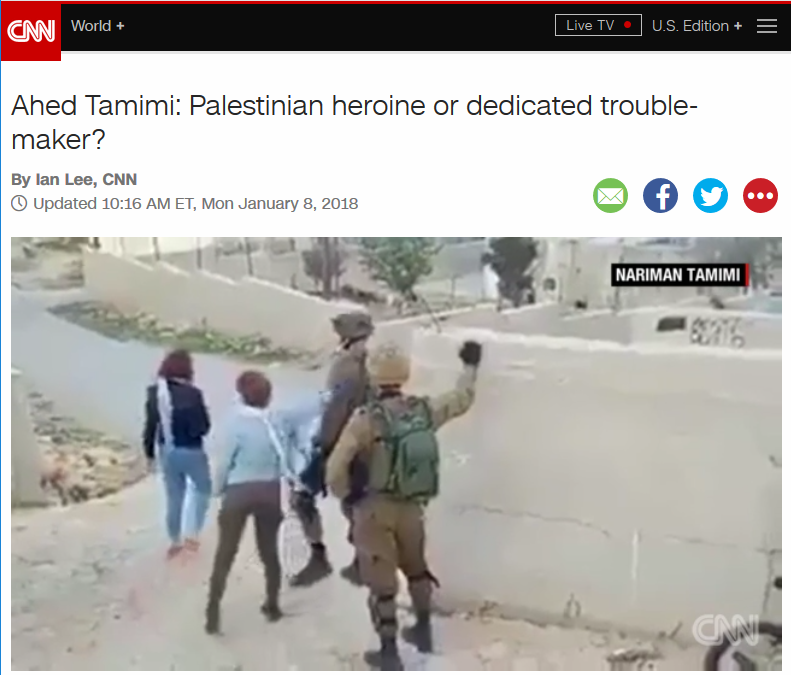 The Newsweek piece also failed to note that the Israeli soldiers are members of a military force that has been occupying the West Bank for 50 years. Nor does CBS’s December 21 account mention the occupation, which structures every interaction between Palestinians and Israelis. (The fact that occupied people have a legal right to resist occupation is left out of all of the articles discussed in this piece.)

A report in the New York Times (12/22/17) does not mention that Mohammad Tamimi was shot in the face with a rubber bullet until the 13th paragraph, as though this fact is of minimal importance. The Times describes Nabi Saleh as having “long-running disputes with a nearby Israeli settlement, Halamish, that Nabi Saleh residents say has stolen their land and water.” The Times does not note that, as a colony on occupied territory, Halamish is illegal under international law.

The Newsweek piece says Tamimi “has now been indicted on five counts of assaulting security forces,” and that she is “charged with interfering with the soldiers’ duties by preventing them from returning to their post.” It notes that “in May, she was charged with interfering with soldiers who were trying to arrest a protester throwing stones,” and refers to her indictment two other times, including in the headline. At no point does the article mention that the proceedings are taking place in a military court. Similarly, an Associated Press (1/9/18) report refers to “Israel’s hard-charging prosecution” and “the charges” against Tamimi, without mentioning that she is being tried by the same occupying military that shot her cousin.

Omitting that information makes it sound like Tamimi will receive a fair legal process, but the evidence suggests the opposite. According to the Association for Civil Rights in Israel, Palestinians in the occupied West Bank are subjected to a military court system that “does not grant the right to due process and the rights derived from it,” whereas Israelis illegally colonizing the Occupied Territories have the rights and privileges of a civilian legal system. 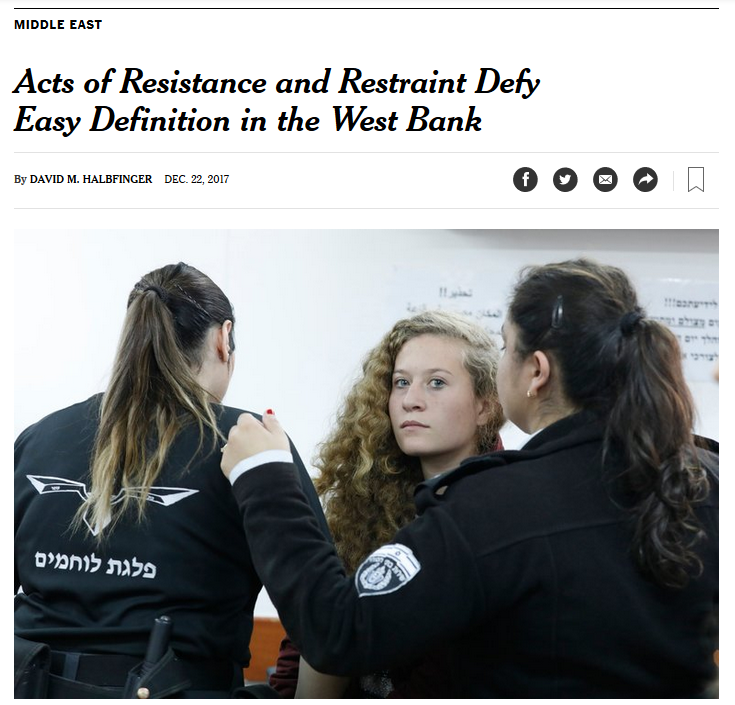 The New York Times (12/22/17) placed the same emphasis on life-threatening violence and social media tactics: “The latest incident, filmed in the family’s backyard, occurred within hours after a cousin of Ms. Tamimi’s was shot in the face with a rubber bullet, and it was streamed live on Facebook on December 15.”

The New York Times’ framing of Tamimi’s story suggests that the case’s central issue is whether Palestinians or Israelis would have been better off if the soldier had reacted more violently to being slapped. The Times’ David Halbfinger says

that Israelis could not decide whether the soldiers were virtuous pillars of forbearance and strength . . . or an embarrassing advertisement of national paralysis and vulnerability.

debated whether the video might have damaged their cause, by showing their oppressors behaving gently, or helped it, by showing that resistance can be effective even when one is unarmed.

The paper even implied that Palestinians may be happy that Tamimi was arrested, writing that “the scene of the young woman being hauled away may have given Palestinians the clear-cut propaganda coup they had been denied by the original confrontation.”

CNN similarly trivialized Tamimi’s arrest, noting that Israelis call her “Shirley Temper” because of “her long ginger curls” and because they accuse her of “starring in carefully choreographed ‘Pallywood’ videos, a dismissive characterization of protests considered staged for the camera.”

While the Times and CNN provide a forum for speculation about whether Palestinians want their own children to suffer because it makes for good public relations, there is much this framing overlooks. For example, none of the above-mentioned articles mention the risk of Tamimi being seriously harmed in Israeli jails. Yet UNICEF charges Israel with subjecting Palestinian youth to “practices that amount to cruel, inhuman or degrading treatment or punishment, according to the Convention on the Rights of the Child and the Convention against Torture.” These include children “being aggressively awakened in the middle of the night by many armed soldiers and being forcibly brought to an interrogation center tied and blindfolded, sleep-deprived,” and “threatened with death, physical violence, solitary confinement and sexual assault, against themselves or a family member.”

Israel’s well-documented mistreatment of Palestinian youth is ignored in these reports, which suggests it is not Palestinian parents but Western reporters who are interested in crafting a public relations spectacle.

Gregory Shupak teaches media studies at the University of Guelph-Humber in Toronto. His book, "The Wrong Story: Palestine, Israel and the Media," is published by OR Books.

Prominent Rights Group Says Israeli Rule Must Finally Be Seen 'For What It Is: Apartheid'

Covid-19 Under Apartheid: How Israel Manipulates Suffering of Palestinians

Mike Lofgren
A Layman’s Guide to Spotting Sedition, Treason, and Lunacy in General

Jason Pramas
We Must Defeat the Far-Right Insurrectionist Movement. Here's How...

Michael T. Klare
Can Biden Achieve Progress Where It Matters While Avoiding a New Cold (or Hot) War?

Jeff Hauser
Impeaching Trump Is Only the Beginning

Mahad Dirieh
The Case For Course Correction in Yemen's Endless War...
END_OF_DOCUMENT_TOKEN_TO_BE_REPLACED
Connect With Us

END_OF_DOCUMENT_TOKEN_TO_BE_REPLACED

In a wrenching addendum to the drama of a day that saw the only U.S. president in history be impeached twice, the righteous charge to remove him was led by Maryland Rep. Jamie Raskin, whose 25-year-old son Tommy just died by suicide. The day after burying Tommy and feeling him " very much with me and my heart," Raskin was applauded by colleagues who knew of his loss as he came to certify the vote cut short by the riot; he did his duty because, "Change is made by people who show up."
Read More...
END_OF_DOCUMENT_TOKEN_TO_BE_REPLACED