by
The Children of Berks
0 Comments

The youngest have spent almost half their lives locked up and don’t have a single  memory formed outside the confines of the Berks County detention facility. But they do believe in Santa and wrote letters to him saying what they want for Christmas.

Families are not supposed to be in immigration detention at all — and certainly not for more than a few days — but these children have been locked up with their mothers for more than a year. They are fleeing violence in Central America and asked for asylum in the United States. They got caught in legal limbo while their lawyers press for the Supreme Court to hear their case.

The youngest have spent almost half their lives locked up and don’t have a single  memory formed outside the confines of the Berks County detention facility. But they do believe in Santa and wrote letters to him saying what they want for Christmas. Even the youngest kids ask Santa, more than anything else, to give them their freedom.

“Dear Santa Claus, I am a girl with my whole life ahead of me and I want freedom like any other girl. The only thing I ask on this day is an opportunity to be with the person who’s waiting for me outside [my little sister]. This person has a little heart very [strong] but little." “Dear Santa, I like computers, PlayStation, going to the beach, and video games, but here I can’t do those things. That’s why I want my freedom.”

Samuel and his mom fled El Salvador after his mother witnessed a gang crime and their lives were threatened. He has been diagnosed with PTSD and is at risk of harming himself. He has serious dental problems and went more than six months in detention without treatment. 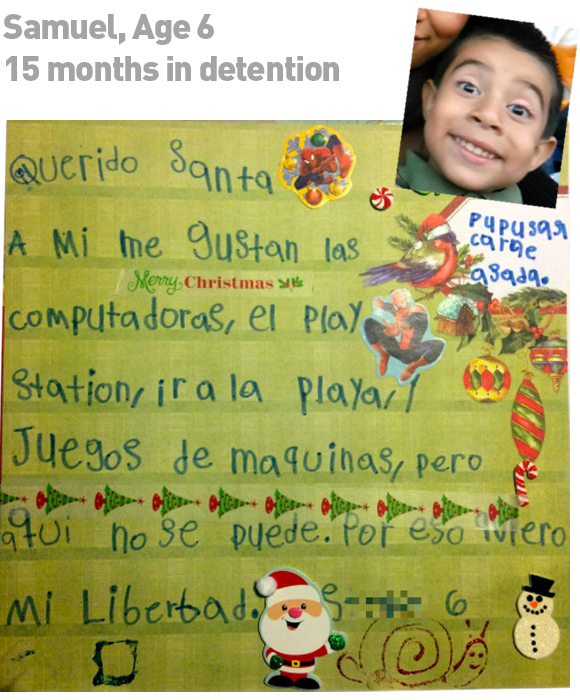 “Dear Santa! First of all I would like you to help me get my freedom. I have been imprisoned for 416 days. For Christmas I want a remote control car and a toy cell phone. Thank you very much.”

Daniel just turned 3. He has been detained for as long as he can remember and learned to talk in detention. He and his mother fled kidnapping threats and gender-based violence in Honduras. His mom has been diagnosed with PTSD. 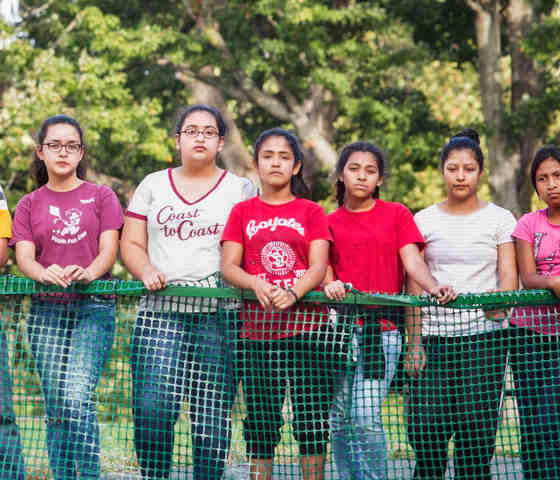 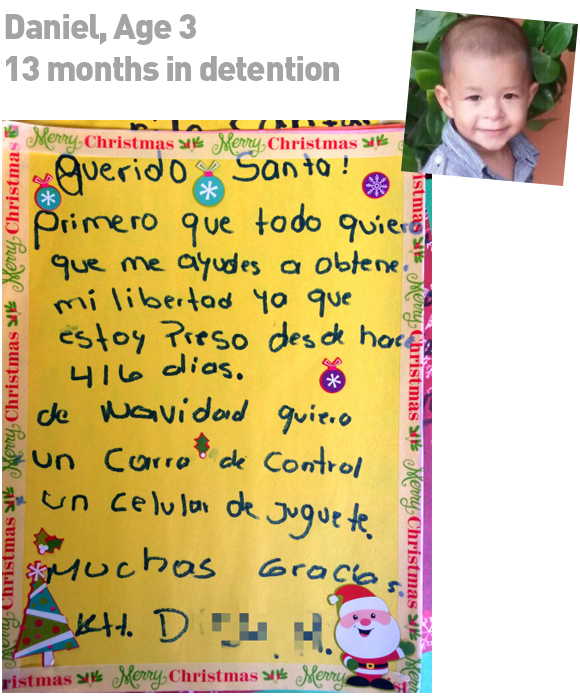 “Dear Santa. First, what I would like to ask from you this Christmas is my freedom. I’ve already spent two Christmases here. And also I want a remote control car. Thank you very much. Joaquin, 7 years old.”

Joaquin is underweight, at about 1 to 3 percent of the normal body weight for a child of his age, and he is behaviorally challenged. He has been diagnosed with PTSD and sometimes expresses his frustration and hopelessness in suicidal gestures. 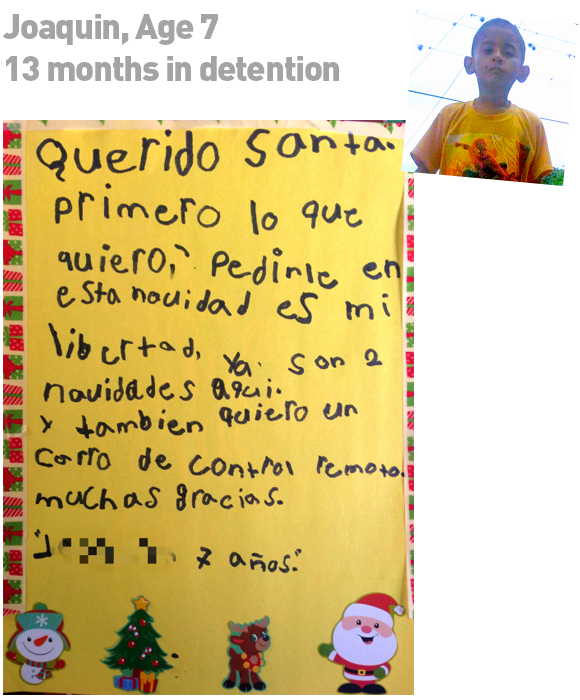 “Dear Santa I am Juan, 7 years old. I want freedom to be able to be with my aunt and uncle. I don’t want to return to my country. And I also want a remote control airplane.”

Juan and his mother fled El Salvador because a gang threatened to kidnap Juan and hurt his mother. Since they came to this country seeking refuge, this will be their second Christmas in detention. 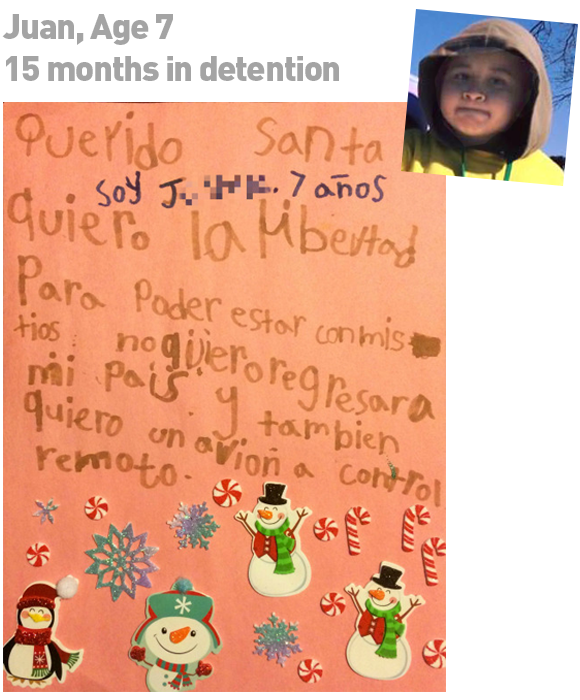 “Dear Santa, for this Christmas I want: ‘Frozen’ headphones, shoes, an iPad, candy, a skateboard, and to leave here with my mom. I am 6 years old.”

Beatrice has been locked up for more than 15 months. During that time, she’s been very sick from a recurring untreated bacterial infection. She and her mom fled Honduras because they feared for their lives because of gender-based violence. 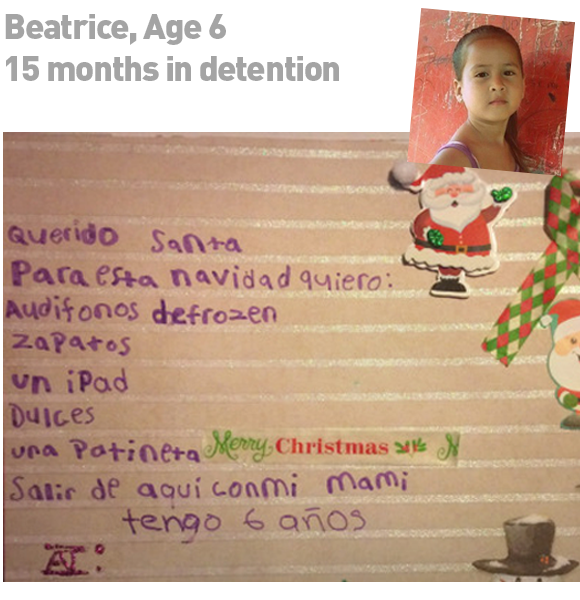 The Children of Berks

The Children of Berks are children currently being detained, along with their families, at the Berks County detention facility in Pennsylvania.

Yemen Is a Public Health Catastrophe

END_OF_DOCUMENT_TOKEN_TO_BE_REPLACED

Though they rank close to last nationally in health care, education, vaccines - and may face power shortages - Texas lawmakers are spending this week debating four anti-trans bills, including one to make it illegal/ child abuse to offer gender-affirming, often life-saving, health care to trans kids. One, an aggrieved Kai Shappley, 10, has had it with "asking adults to make good choices,” she said. "Please just listen to me, hear me, try to educate yourselves, try to understand...everybody."
Read More...
END_OF_DOCUMENT_TOKEN_TO_BE_REPLACED