Nightly Newscasts Have Virtually Ignored Poverty in 2016. Here’s Why.

One in two Americans will experience poverty or near poverty during their working years. But you wouldn’t know that from watching the news.

Nightly news broadcasts on the three major television networks barely mentioned the 47 million Americans living in poverty in the first quarter of 2016. According to a new report from Media Matters for America, NBC Nightly News ran just two segments on the topic in the first three months of this year. What’s worse, ABC and CBS failed to cover the issue entirely.

Even when it comes to income inequality—a trend gaining increasing media attention—the networks fell down on the job. NBC aired just 5 segments on the topic (out of hundreds), compared to just one from CBS Evening News and zero on ABC’s World News Tonight.

Cable outlets and Sunday shows performed marginally better, as Fox News and MSNBC each aired 32 segments on inequality and CNN ran 17. But less than half of those—48 segments across all three cable networks—focused on those most acutely affected by income inequality: Americans living in poverty. And, it should be noted, cable news outlets have 24 hours of airtime to fill—a total of 48 segments among thousands of hours of coverage hardly amounts to significant media attention. 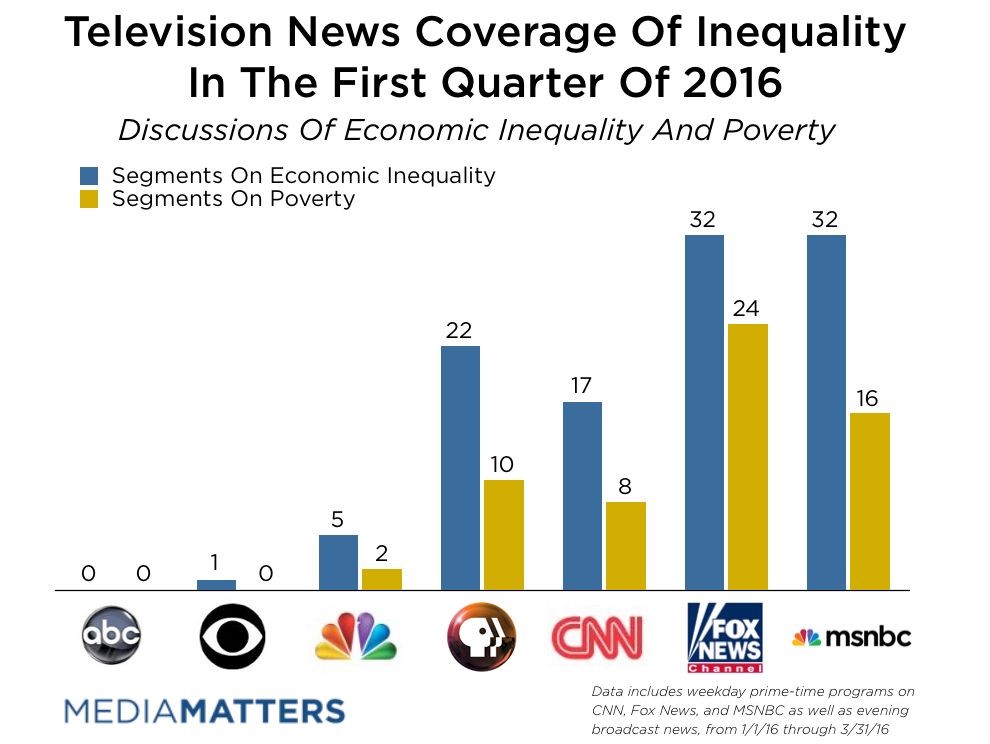 This should come as no surprise. A separate survey of nightly newscasts in 2015 found that economic stories received less coverage than in any year since 1988. Of the economic stories that were covered, very few focused on poverty. The top economic story of the last year? The stock market.

And the guests discussing issues of inequality and poverty are hardly representative of those experiencing it. Women accounted for less than a third of guests during segments on inequality or poverty on TV News programs, despite the fact that women are more likely to experience poverty at every stage of life.

One simple explanation? The 2016 election. The presidential race has been the most-covered story of the year—with one candidate, in particular, occupying the lion’s share of coverage. Donald Trump has received more earned media coverage than every other candidate combined in 2016. His candidacy alone is on track to earn more than double all media coverage of the economy in 2015.

And a deeper dive shows that most of the limited coverage of poverty came in the context of presidential elections. Interviews with Democratic candidate Bernie Sanders accounted for six of the nine Sunday show segments mentioning poverty.

While the data speaks to the TV news’s indifference to issues that affect low income Americans, it also proves that presidential campaigns—and the activists, operatives, and public thinkers who influence those campaigns—have an increasingly outsized ability to steer that coverage.

Another silver lining? TV news is dying. 35 percent of millennials (18- to 29-year-olds) found social media to be the most helpful new source in 2016. In contrast, just 12 percent say cable TV news was the most helpful. And at 4 percent, network news barely registers. While cable news is still the most popular source among older age groups, all trend lines point toward the growth of mobile and video content in the future.

As the TV audience shrinks, online outlets are filling the void. The list of top 50 online news outlets is littered with news organizations who eschew horse race coverage of the election in favor of substantive coverage. Not-for-profit outlets like The Marshall Project, the Economic Hardship Reporting Project, and this very site all take different approaches to covering issues that affect low-income Americans.

So while the current TV landscape may look bleak for Americans working in poverty, the future of news is bright.

Jeremy Slevin is the Associate Director of Advocacy for the Poverty to Prosperity Program at the Center for American Progress.

The World Not Only Needs Women Leaders—It Needs Feminist Leaders

Hospital-Owning Frist Family 'Made a Killing' During Pandemic, With Wealth Soaring by $8.1 Billion
More in:
Economy
,
Poverty, Media, Inequality

Tara Lohan
Sounds of Silence: Extinction Is Erasing the Earth’s Music
END_OF_DOCUMENT_TOKEN_TO_BE_REPLACED
Connect With Us

END_OF_DOCUMENT_TOKEN_TO_BE_REPLACED

Marking this year's International Women's Day - which should, duh, be every day - were home care workers fighting for decent pay, Latinx women combating gender violence, tributes to women in STEM, sports, racial justice work, our own pasts - "I am because they were" - and companies trying to make a trashy buck: Burger Queen For A Day! Most aptly for an event born of bread-and-roses women labor activists seeking equal treatment, the day sparked calls to raise the damn minimum wage.
Read More...
END_OF_DOCUMENT_TOKEN_TO_BE_REPLACED