SUBSCRIBE DONATE
Published on
Tuesday, June 07, 2016
by
The Intercept

Last night, Associated Press – on a day when nobody voted – surprised everyone by abruptly declaring the Democratic Party primary over and Hillary Clinton the victor. The decree, issued the night before the California primary in which polls show Clinton and Bernie Sanders in a very close race, was based on the media organization’s survey of “super-delegates”: the Democratic Party’s 720 insiders, corporate donors and officials whose votes for the presidential nominee count the same as the actually elected delegates. AP claims that super-delegates who had not previously announced their intentions privately told AP reporters that they intend to vote for Clinton, bringing her over the threshold. AP is concealing the identify of the decisive super-delegates who said this.

Although the Sanders campaign rejected the validity of AP’s declaration – on the ground that the super-delegates do not vote until the convention and he intends to try to persuade them to vote for him – most major media outlets followed the projection and declared Clinton the winner. 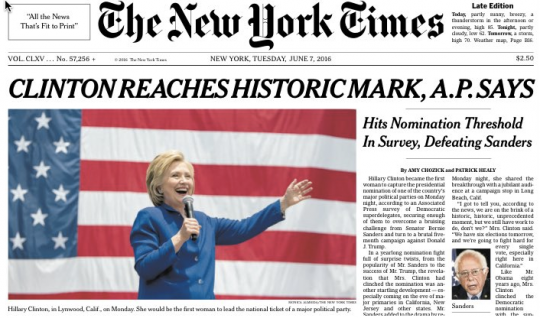 This is the perfect symbolic ending to the Democratic Party primary. The nomination is consecrated by a media organization, on a day when nobody voted, based on secret discussions with anonymous establishment insiders and donors whose identity the media organization – incredibly – conceals. The decisive edifice of super-delegates is itself anti-democratic and inherently corrupt: designed to prevent actual voters from making choices that the party establishment dislikes. But for a party run by insiders and funded by corporate interests, it’s only fitting that their nomination process ends with such an ignominious, awkward and undemocratic sputter.

Biden Is Flirting With a Better Economic Paradigm. Young People Need Him to Commit.

Joshua Kluever
In the United States, Democratic Socialism Can Win
END_OF_DOCUMENT_TOKEN_TO_BE_REPLACED
Connect With Us

END_OF_DOCUMENT_TOKEN_TO_BE_REPLACED

Gonzo fans of QAnon, space lasers and the former guy have been frantically busy at Arizona's "audit" of election ballots, using "forensic analysis" and UV lights to study ink and folds and weight and votes from "fake people" to uncover The Big Lie and wrestle good from evil. Now - Racism 101 - they're looking for bamboo particles from ballots purportedly smuggled in from China. THIS IS IMPORTANT!! The dominoes will fall!!
Read More...
END_OF_DOCUMENT_TOKEN_TO_BE_REPLACED