The Sanctity of Military Spending

Administration officials announced last night that the President, in tomorrow's State of the Union address, will propose a multi-year freeze on certain domestic discretionary spending programs.  This is an "initiative intended to signal his seriousness about cutting the budget deficit," officials told The New York Times.

But the freeze is more notable for what it excludes than what it includes.  For now, it does not include the largest domestic spending programs:  Medicare, Medicaid and Social Security.  And all "security-releated programs" are also exempted from the freeze, which means it does not apply to military spending, the intelligence budget, the Surveillance State, or foreign military aid.  As always, the notion of decreasing the deficit and national debt through reductions in military spending is one of the most absolute Washington taboos.  What possible rationale is there for that?

The facts about America's bloated, excessive, always-increasing military spending are now well-known.  The U.S. spends almost as much on military spending as the entire rest of the world combined, and spends roughly six times more than the second-largest spender, China.  Even as the U.S. sunk under increasingly crippling levels of debt over the last decade, defense spending rose steadily, sometimes precipitously.  That explosion occurred even as overall military spending in the rest of the world decreased, thus expanding the already-vast gap between our expenditures and the world's.  As one "defense" spending watchdog group put it:  "The US military budget was almost 29 times as large as the combined spending of the six 'rogue' states (Cuba, Iran, Libya, North Korea, Sudan and Syria) who spent $14.65 billion."  To get a sense for how thoroughly military spending dominates our national budget, consider this chart showing where Americans' tax revenue goes: 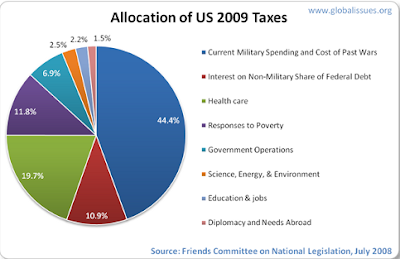 Since much of that overall spending is mandatory, military spending -- all of which is discretionary -- accounts for over 50% of discretionary government spending. Yet it's absolutely forbidden to even contemplate reducing it as a means of reducing our debt or deficit.  To the contrary, Obama ran on a platform of increasing military spending, and that is one of the few pledges he is faithfully and enthusiastically filling (while violating his pledge not to use deceitful budgetary tricks to fund our wars):

President Barack Obama will ask Congress for an additional $33 billion to fight unpopular wars in Afghanistan and Iraq on top of a record $708 billion for the Defense Department next year, The Associated Press has learned.

In sum, as we cite our debtor status to freeze funding for things such as "air traffic control, farm subsidies, education, nutrition and national parks" -- all programs included in Obama's spending freeze -- our military and other "security-related" spending habits become more bloated every year, completely shielded from any constraints or reality.  This, despite the fact that it is virtually impossible for the U.S. to make meaningful progress in debt reduction without serious reductions in our military programs.

Public opinion is not a legitimate excuse for this utterly irrational conduct, as large percentages of Americans are receptive to reducing -- or at least freezing -- defense spending.  A June, 2009 Pew Research poll asked Americans what they would do about defense spending, and 55% said they would either decrease it (18%) or keep it the same (37%); only 40% wanted it to increase.  Even more notably, a 2007 Gallup poll found that "the public's view that the federal government is spending too much on the military has increased substantially this year, to its highest level in more than 15 years."  In that poll, 58% of Democrats and 47% of Independents said that military spending "is too high" -- and the percentages who believe that increased steadily over the last decade for every group.

The clear fact is that, no matter how severe are our budgetary constraints, military spending and all so-called "security-related programs" are off-limits for any freezes, let alone decreases.  Moreover, the modest spending freeze to be announced by Obama tomorrow is just the start; the Washington consensus has solidified and is clearly gearing up for major cuts in Social Security, Medicare and Medicaid, with the dirty work to be done by an independent "deficit commission."  It's time for "everyone" to sacrifice and suffer some more -- as long as "everyone" excludes our vast military industry, the permanent power factions inside the Pentagon and intelligence community, our Surveillance and National Security State, and the imperial policies of perpetual war which feed them while further draining the lifeblood out of the country.

UPDATE:  I just saw this scary headline on MSNBC, became very frightened, and have changed my mind, as I now realize we need to massively increase our military spending to Stay Safe!!! 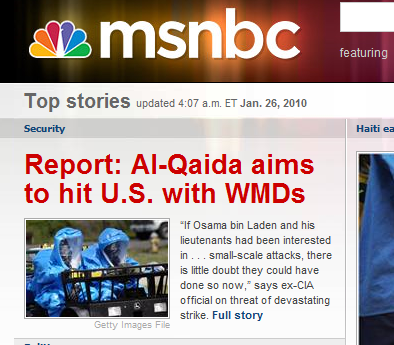 The Washington Post is hyping the same report.  Apparently, it's breaking news -- meriting screaming red-alert headlines -- that Al Qaeda would like to ("aims to") acquire WMDs and use them against the U.S.  But we should all try to remain a little calm, at least.  I'm sure if we just buy some more fighter jets, create some better underground bombs, invade a few more Muslim countries, keep more Muslims imprisoned forever with no charges, give the Pentagon, the CIA and their private contractors a lot more unaccounted-for cash and stay out of their way, expand our domestic spying networks even further through private sector telecom contracts, pour tens of billions of dollars more into the coffers of our Middle East client states, and kill a few more civilians with drones, this problem will be handled.  It's just a matter of making sure we bulk up our military budget -- and Look Forward, not Backward to what was done in the past -- and we'll be able to Stay Safe from this Terrorist-WMD menace.

As for the deficit, no need to worry about that.  We can just freeze programs for national parks and cut Social Security and Medicare.

END_OF_DOCUMENT_TOKEN_TO_BE_REPLACED

With the White House openly giving up on the pandemic, it's fitting the Lincoln Project's put the couple from hell known as Jivanka on massive billboards in Times Square as a reminder they likewise don't give a shit about you. Their lawyer wants to sue over the "malicious and defamatory" ads; the Project says their indifference and entitlement are real, their "indignant outrage (is) comical," and "their empty threats will not be taken any more seriously than we take Ivanka and Jared."
Read More...
END_OF_DOCUMENT_TOKEN_TO_BE_REPLACED