SUBSCRIBE DONATE
Published on
Wednesday, October 28, 2020
by
Fairness and Accuracy In Reporting (FAIR)

By accepting "court packing" as "the term for" expanding the court, journalists lend a hand to those anti-democratic forces.

Getting journalists to talk more directly about the true problems with the court  is a critical step along the way. (Photo: Joe Ravi/CC-BY-SA 3.0)

As Republicans ram through Trump’s third Supreme Court nomination with an election underway, Democrats are increasingly contemplating expanding the court. But rather than cover it with the “objectivity” they claim to strive for, the country’s dominant media outlets have adopted a right-wing frame of the issue—calling it “court packing”—that delegitimizes court expansion. 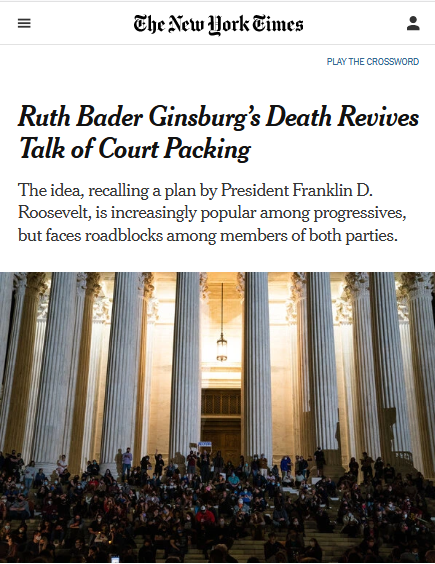 “Ruth Bader Ginsburg’s Death Revives Talk of Court Packing,” announced a New York Times headline (9/19/20). “What Is Court Packing, and Why Are Some Democrats Seriously Considering It?” asked the Washington Post (10/8/20). In that piece, the Post‘s Amber Phillips explicitly acknowledged the bias inherent in the phrase, yet presented it as practically official:

Expanding the Supreme Court to more than nine seats sounds like a radical idea, and the term for it, “court packing,” sounds derisive because it has created controversy every time it has come up.

In typical corporate media style, such articles often present the issue as a he said/she said dispute. In the WaPo piece, Democrats are “frustrated that the Supreme Court could get even more conservative,” while Republicans “paint that as sour grapes”; over at the Times, Democrats “characterize court expansion as a defensive move against Republican actions, not a unilateral power grab,” while Republicans “have called the idea radical and undemocratic.”

In these formulations, one side must win and the other lose. But the reality they gloss over is that those aren’t the real teams here. The struggle over the Court is at heart a struggle between anti-democratic forces and the interests of the vast majority of people in this country.

In recent years, massive amounts of corporate money have been directed toward efforts, led by the right-wing Federalist Society, to capture the US courts for corporate interests—dismantling voting rights, favoring corporate rights over individual rights, and stripping the power of government to regulate corporations (CounterSpin, 10/16/20). By framing the issue as one of Republicans vs. Democrats, media ignore the more important threat to democracy as a whole. And by accepting “court packing” as “the term for” expanding the court, journalists lend a hand to those anti-democratic forces.

The phrase “court packing” isn’t new. President Franklin D. Roosevelt’s opponents coined it to delegitimize his plan to expand the court after it repeatedly struck down parts of his New Deal in the name of restraining government power (federal and—in some cases, like the court’s rejection of New York’s effort to set a minimum wage for women—state). In the end, FDR’s plan languished in the Senate, but the president won the war; in the wake of his public campaign against it, the court began issuing rulings more favorable to the New Deal and other economic recovery plans. One of the conservative justices retired, giving FDR the opportunity to swing the balance back in his favor—no thanks to the media, which ran predominantly unfavorable stories about FDR’s plan.

The circumstances are different this time around, with Republicans on the verge of installing a 6–3 conservative majority, and none of the conservative seats likely to open under a Biden term; the oldest conservative justice, Clarence Thomas, is just 72, and hasn’t given any indication that he’s interested in retiring. Plus, it’s unlikely Biden would push forcefully for a court expansion the way FDR did, putting pressure on the court to temper its rulings. But the rampant journalistic use of the biased term “court packing” hasn’t changed.

It’s also noteworthy what that these “court packing” stories highlight—and ignore. In arguments about court expansion, the right tends to focus on ideas of tradition (like the false claim that adding justices would be unprecedented) and the culture wars (like Roe v. Wade). Democrats often lean on the Republican hypocrisy of blocking Obama’s nomination of Merrick Garland to fill Antonin Scalia’s seat in 2016, when the GOP insisted, eight months before an election, that the voters should have a chance to weigh in before a new justice was confirmed—a principle instantly abandoned when Ruth Bader Ginsburg died seven weeks before an election. 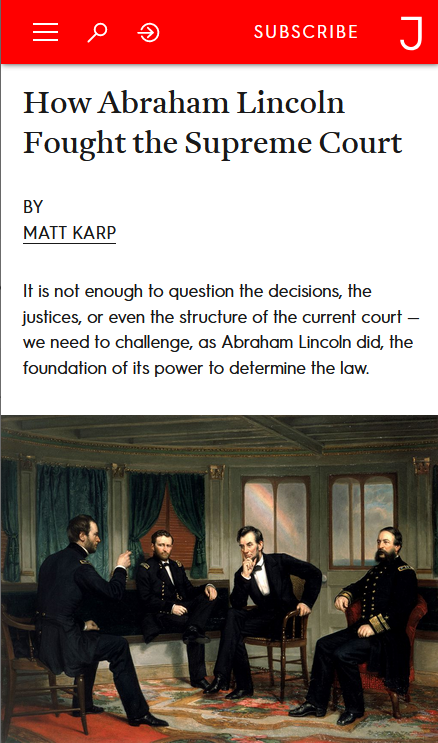 In the end, it’s unlikely that even if—and it’s a big if—Democrats take the presidency and the Senate, there will be enough agreement within the party to expand the Supreme Court. But that’s also not the only way to counter the corporate takeover of the court. In the face of an intransigent pro-slavery court, Lincoln and his anti-slavery allies recognized that their most powerful and effective strategy was not to try to add enough justices to gain the upper hand within the court; it was to undermine the false image of an impartial, democracy-protecting court that must always have the last word. As Matt Karp writes in Jacobin (9/19/20):

Lincoln persisted in rejecting judicial supremacy — and also the basic idea underlying it, that law somehow exists before or beyond politics, and thus it was illegitimate to resist the proslavery court through popular antislavery mobilization. “We do not propose to be bound by [Dred Scott] as a political rule,” he said. “We propose resisting it as to have it reversed if we can, and a new judicial rule established upon this subject.”

Others have advocated for a similar approach today: marginalizing rather than trying to capture the court (e.g., New Republic, 10/13/20). Neither task would be easy, but getting journalists to talk more directly about the true problems with the court  is a critical step along the way.

END_OF_DOCUMENT_TOKEN_TO_BE_REPLACED

In Trump's latest masterful move to overturn the election, his star witness at a Michigan hearing raved, maybe drunkenly, that poll workers ran ballots through machines "thousands of times," dead people and "illegals" voted, ballots got hauled off in a food truck she wished had sandwiches, poll books showed "zero" voters because "you guys (did) something crazy to it" and Democrats "ruin your life." The day's big question: Should SNL's Kate McKinnon or Cecile Strong play her?
Read More...
END_OF_DOCUMENT_TOKEN_TO_BE_REPLACED