SUBSCRIBE DONATE
Published on
Wednesday, September 16, 2020
by
Fairness and Accuracy In Reporting (FAIR)

Journalists Need to Be Clear About a Clear Threat to Democracy

US elections have been stolen before, and it’s important to make sure another election isn’t stolen again.

"Trump is already notorious for lying, cheating and stealing, and has every motive to steal the election because he’s behind in the polls, and once he leaves office faces the possibility of prosecution for crimes he has already confessed to committing,"  writes Cho. (Photo: Win McNamee/Getty Images)

When the president of the United States has:

…then the evidence threshold has been more than satisfied for journalists to declare that he is trying to steal the 2020 election. Journalists and newsrooms have an obligation to report that the most powerful person in the country is trying to subvert the election and retain power illegitimately, and a failure to blow the whistle on a clear threat to democracy is journalistic malpractice. 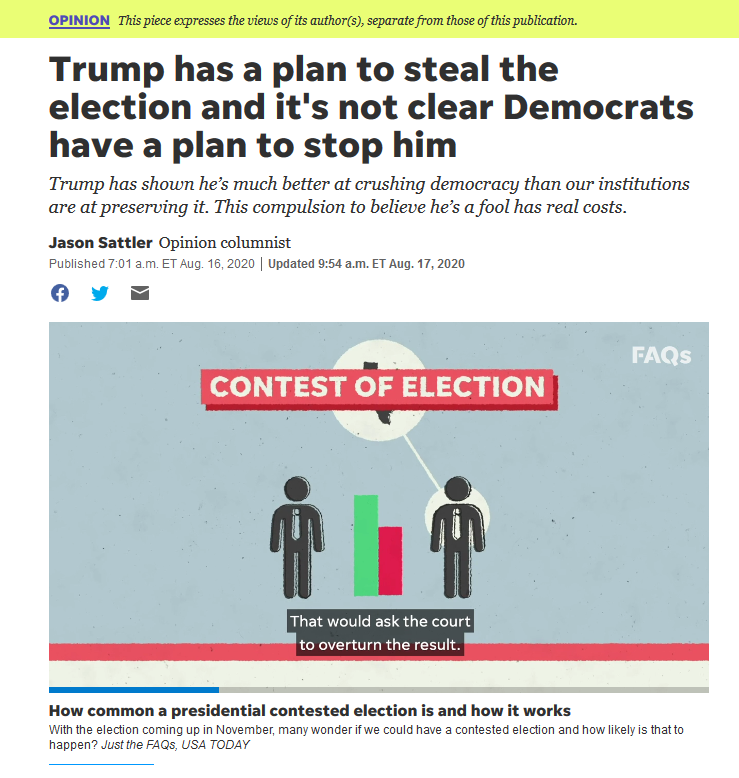 Despite abundant evidence, corporate media so far have treated the question of whether Trump is trying to steal the election as a matter of opinion (USA Today, 8/16/20).

Yet, while one can find several op-eds (e.g., The Week, 8/11/20; USA Today, 8/16/20) pointing out the obvious fact of President Donald Trump trying to steal the 2020 election, it appears to be taboo for journalists at the biggest newsrooms in the country to straightforwardly report the fact that Trump is trying to do so.

The ACLU’s Dale Ho (Vanity Fair, 6/14/20), an attorney fighting against GOP voter suppression lawsuits, has argued that, ultimately, lawyers cannot litigate their way out of Trump’s election theft efforts, and that a “news media fight” has to be waged to prepare US voters’ expectations. However, it’s hard for US citizens to prepare if the US media aren’t reporting that Trump is trying to steal the election.

FAIR conducted a Nexis search for “Trump” + “election” + “steal” of the New York Times, Washington Post, Wall Street Journal, Houston Chronicle, Chicago Tribune, Star Tribune, Los Angeles Times and USA Today—most of the biggest newspapers in the country by circulation—from July 7 to September 7. Out of all the results pertaining to the election, there wasn’t a single article reporting that Trump is trying to steal the 2020 election. 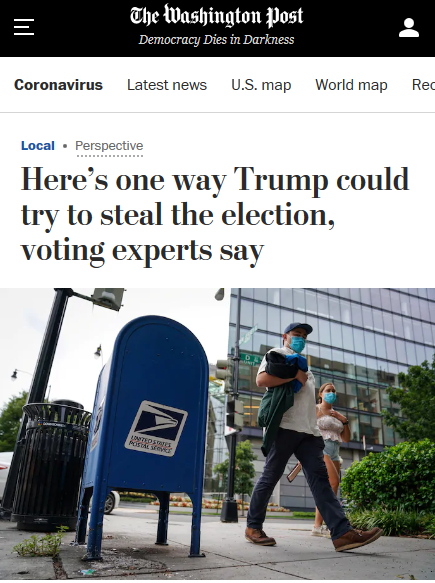 The news articles that do discuss the ongoing efforts to steal the election frame it as a hypothetical possibility (Washington Post, 8/16/20).

Slate (8/3/20) and the Washington Post (8/16/20) ran articles describing how Trump could potentially steal the election by “blocking the counting of mail-in ballots,” because more Democrats are in favor of mail-in ballots—which take longer to be counted—and the potential for Trump to prematurely “declare himself the victor” should initial results based on in-person voting show him winning. That’s in addition to preventing the Postal Service from delivering mail-in ballots to voters and to elected officials promptly.

Investigative journalist Greg Palast (Salon, 8/25/20) argues that “the real theft of the 2020 presidential election is not the lack of mailboxes,” but the “lack of commitment to counting ballots by both parties.” Mail-in voting and absentee ballots are already rejected at a much higher rate than in-person voting, especially from younger and minority voters, and some projections are estimating that absentee ballot rejections could be tripled in battleground states for November (AP, 9/7/20).

There have been reports of Democratic Party politicians like Beto O’Rourke (Houston Chronicle, 5/13/20) and Joe Biden (Washington Post, 7/23/20) warning that they believe Trump will “do everything within his power” to steal the election, and that “this president is going to try to indirectly steal the election by arguing that mail-in ballots don’t work.” However, corporate media also give space for Trump to air his accusations that it’s Democrats who are trying to commit election theft (Politico, 7/31/20; Fox News, 8/20/20; The Hill, 8/24/20), making this more “he said, she said” reporting, rather than an independent assessment of Trump’s plans and actions.

Other outlets ran articles (New Yorker, 7/21/20; Washington Post, 7/22/20; Politico, 9/4/20) and op-eds (CNN, 8/17/20) considering different scenarios of what could happen if Trump refused to leave office if he loses the election. Other op-eds (Washington Post, 7/9/20, 8/18/20) essentially advised Americans to trust the “bureaucracy and legal procedure,” even if it might “sound naive,” because “there are laws that stop others from using the authorities of the Executive Branch on behalf of anyone other than the legitimate president.” There are also laws forbidding officials from using government property for political purposes, but that didn’t stop the Trump campaign from turning the White House into a stage set for the Republican National Convention.

While contemplating different scenarios is valuable, these articles presume that American citizens are supposed to be passive spectators, rather than active political participants, since they include no calls to action, as a few other op-eds have (Intercept, 8/11/20; New York Times, 9/3/20). Neither do such articles point out why Americans need to contemplate these scenarios in the first place: President Donald Trump is trying to steal the election. 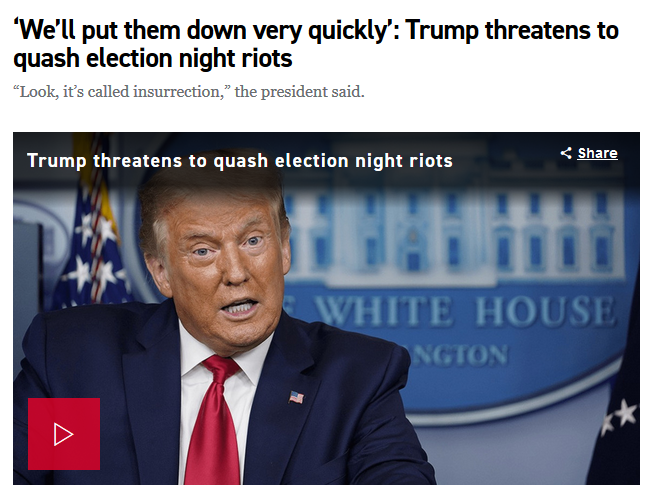 By referring to protests against assertions of re-election victory as an “insurrection,” Trump is threatening to use the military to enforce his claim to power—an anti-democratic stance Politico (9/11/20) legitimizes by referring to such protests as “riots.”

A bipartisan group of about 80 political operatives and academics have played out various scenarios where Trump loses the election but refuses to concede, and several of them have ended in violence (Newsweek, 7/26/20). Trump has already stated he would “very quickly” suppress Election Night protests against his claims of victory—what he calls an “insurrection,” a term that outlets like The Hill (9/11/20) and Politico (9/11/20) bolster by calling protests against his reelection “riots.”

Trump’s rhetoric seems to echo that of his longtime confidant (and convicted felon) Roger Stone’s advice for Trump to invoke the Insurrection Act of 1807 to declare martial law to seize power if “cheating” costs him the election.

Michael Caputo, assistant secretary for public affairs at the Department of Health and Human Services (who serves as a sort of political commissar over the CDC), likewise asserted that Trump and his supporters will need to use force to defend Trump’s impending victory against false charges that he didn’t actually win: “When Donald Trump refuses to stand down at the inauguration, the shooting will begin,” Caputo said in a video posted to Facebook.  “If you carry guns, buy ammunition, ladies and gentlemen, because it’s going to be hard to get.”

It’s especially important for US media to inform their audiences about Trump’s election-theft efforts, because the US Constitution doesn’t actually grant citizens the right to vote for the president—only a college of electors [does]—with states having nearly unlimited power to decide how those electors are chosen (Atlantic, 3/29/20). Republican politicians have been almost entirely steadfast and uniform in their support of Trump, to the point that they have no official platform other than his reelection, and refused to even hold hearings when he was impeached by the House for abuse of power. Legal scholar Lawrence Douglas (Vox, 6/3/20) pointed out that there are no federal laws or constitutional procedures to guide Americans in a contested election where neither side refuses to concede, since the peaceful succession of power relies more on norms (which Trump regularly runs roughshod over) than on laws or institutions.

If the 2020 election is stolen, it wouldn’t be the first time in US history. In 1876, following the Hayes/Tilden election, electoral results in four states were contested, with Democratic and Republican officials sending competing electoral certificates to a divided Congress—a situation the Twelfth Amendment (which lays out the procedure for electing a president and vice president) doesn’t say anything about. (In the event, Republican Rutherford B. Hayes, who received 47.9% of the popular vote to Democrat Samuel Tilden’s 50.9%, was declared president in the Compromise of 1877, which involved withdrawing federal troops from former Confederate states and the end of Reconstruction.) 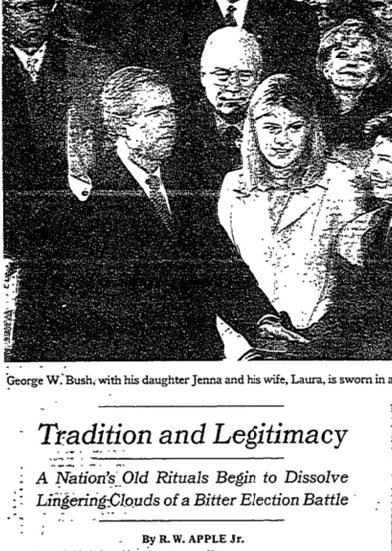 In 2000, in Bush v. Gore, the Supreme Court bestowed the presidency on George W. Bush by stopping the recount of Florida votes—an usurpation strenuously assisted by corporate media (Extra!, 3–4/01), as exemplified by a front-page news analysis in the New York Times (1/21/01)  in which R.W. Apple assured readers that images of the Oval Office and the sounds of “Hail to the Chief” are really what “confer the mantle of authority and legitimacy on a leader.”

While FAIR  (9/27/19, 11/22/19) has often criticized the false objectivity of news coverage in the Trump era, the division between the news and opinion sections still remains a valuable distinction because of the implication that straight news coverage deals with delivering factual information, which leaves less room for disagreement. When the media are unable to present as fact that Trump is trying to steal the 2020 election, they are implying that there is room for debate about what his intentions are, simply because he hasn’t explicitly stated: “I am trying to steal the election.”

Trump is already notorious for lying, cheating and stealing, and has every motive to steal the election because he’s behind in the polls, and once he leaves office faces the possibility of prosecution for crimes he has already confessed to committing. During this critical time, it’s important for US media not to propagate the myth of US exceptionalism, which often makes false accusations of “election theft” against Global South countries like Bolivia and Venezuela, and misleads Americans into thinking election theft “can’t happen” here because the US has more “legitimate” institutions. US elections have been stolen before, and it’s important to make sure another election isn’t stolen again.

Michael Beer, Mohamed Brahim
US Must Halt Renewed War Between Morocco and Polisario
END_OF_DOCUMENT_TOKEN_TO_BE_REPLACED
Connect With Us

END_OF_DOCUMENT_TOKEN_TO_BE_REPLACED

Birds Of A Feather: Lame Duck Pardons Turkey And Everything's Fine Here Why Do You Ask?

Because things aren't weird enough, Tuesday saw the shabby, surreal spectacle of President Turkey congratulating Corn the Turkey - "Look at that beautiful, beautiful bird. Oh, so lucky. That is a lucky bird" - because he gets to live another day in the hellscape the guy pardoning him created. The ever-peculiar event was reportedly muted - no jokes, few cameras, loser city - but reporters loudly asked if he'd be pardoning himself. No answer. Maybe because, in truth, the sins are unpardonable.
Read More...
END_OF_DOCUMENT_TOKEN_TO_BE_REPLACED