Their insistence on making a bonfire of the environment means their convention has to compete with disaster scenarios in California and the Gulf of Mexico.

One of the speakers at the Republican National Convention on Monday evening was Nikki Haley, formerly Trump’s ambassador to the United Nations, who helped usher the U.S. out of the Paris climate accords and who slammed Bernie Sanders’ Green New Deal. Haley when pressed will admit that the climate is changing, but she means that the way you might observe that clouds are going by in the sky all the time. She does not believe we need to swing into action immediately to forestall global catastrophe. Her boss, Trump, called the climate emergency a Chinese hoax and doesn’t think we are burning enough coal or drilling enough petroleum.

Monday’s convention was full of ironies. It had to be held virtually because of the coronavirus pandemic, which Trump has allowed to get out of hand. Over 5 million Americans have fallen ill, nearly 180,000 have been killed by it, and we are still seeing a thousand deaths a day and some 50,000 new cases a day. These tragic statistics are the direct result of national government inaction and ineptitude. Even countries that barely have a functioning government have done loads better in dealing with the virus than the US.

Trump promised that the pandemic would go away like a miracle in April, or that the heat of the summer would kill it. He insisted on pushing against mask-wearing, and for opening bars and restaurants around the country even when the rate of transmission was higher than 1, the cut-off according to the Centers for Disease Control.

So that the convention has to be held online is the fault of one man, Donald J. Trump.

And as this gathering of climate change denialists goes on air, mother nature is slapping them around. Not only have they fumbled their way into a massive death toll, equaling three Vietnam Wars with regard to American casualties, but their insistence on making a bonfire of the environment means their convention has to compete with disaster scenarios in California and the Gulf of Mexico.

In California, Anne C. Mulkern at Scientific American reports, unprecedented wildfires are tearing through a million square miles of forest, leaving a blackened dystopia the size of Rhode Island in their wake. There are nearly two dozen of these conflagrations. A quarter of a million people have had to be evacuated or are preparing urgently to leave. Two of the fires are among the largest in the history of the state.

Hundreds of homes are gone.

Critics will point out that forest fires are natural. This is true. We’ve always had them. This is true. Some trees even depend on them to procreate. All true.

The frequency, severity, and extent of these fires, is, however, extraordinary and there is nothing natural about that. This calamity is in some part the result of human beings driving gasoline cars and heating their buildings with coal and gas and engaging in high-carbon farming and building construction. These activities have added to the problem by some significant percentage points. Again, the climate emergency doesn’t cause the fires and there would be some even under normal circumstances. It exacerbates them.

Since the early 1970s, California’s annual wildfire extent increased fivefold, punctuated by extremely large and destructive wildfires in 2017 and 2018. This trend was mainly due to an eightfold increase in summertime forest‐fire area and was very likely driven by drying of fuels promoted by human‐induced warming. Warming effects were also apparent in the fall by enhancing the odds that fuels are dry when strong fall wind events occur. The ability of dry fuels to promote large fires is nonlinear, which has allowed warming to become increasingly impactful. Human‐caused warming has already significantly enhanced wildfire activity in California, particularly in the forests of the Sierra Nevada and North Coast, and will likely continue to do so in the coming decades.

The average surface temperature in California has skyrocketed by 1.8 degrees F. since 1980, according to a UCLA study reported at by Mulkern at Climate Wire. At the same time, there is 30% less precipitation. More heat and more dryness equals more and bigger wildfires.

On Aug. 16, the temperature in Death Valley reached 130 degrees F., probably the highest ever recorded on earth (that temperature was supposedly reached once before in 1913, but the instrumentation wasn’t as good then). Need I add, this is not a good sign? 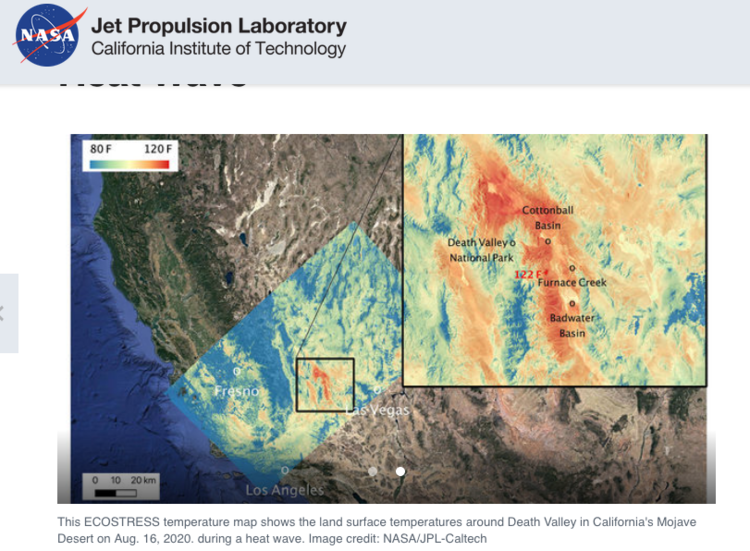 Then there is the Hurricane Laura situation faced by residents of Louisiana or Texas. It is moving slowly over some of the hottest water on earth, and hot water feeds the strength of hurricanes. It could get up to 110 mph and become the strongest storm to hit that part of the coast in fifteen years. Some fear it could make landfall as a Category 3 Hurricane.

The strength of hurricanes is increased as they move over warm water. Moreover, warm water is associated with more humidity, making for heavier rains. Then, warm water expands, and warm weather melts ice, increasing sea level. That makes storm surges higher. The world’s oceans are being rapidly heated by the 37 billion tons of carbon dioxide that human beings spew into the atmosphere every year.

Most of the people at the Republican National Convention are closely tied to Big Oil and Big Coal, and most of them are conspiring to incinerate or drown your children and grandchildren. You can dance around the facts in Congress and maybe pick up some support for bad policy with a clever speech. But if you put heat trapping gases in the atmosphere, it will increase wildfires and hurricanes, and no crafted turn of phrase will turn them back.

The Republican Party cannot solve the climate emergency just as it cannot solve the pandemic. It is about making money for its billionaire clientele, not about delivering better lives to working Americans.

(Click to see more comments or to join the conversation)
At Stake?
An existential threat to our democracy. A global pandemic. An unprecedented economic crisis. Our journalism has never been more needed. Can you pitch in today?
DONATE NOW
Goal: 80K
46%
Please Help. We have to raise $43,000 by November 2nd

Mariko Lewis, Yixia Cai
The Rise in Material Hardship Among Working-Class Whites and How It Could Impact the 2020 Election

Greg Wilkinson
Between Chaos and Commonwealth

Christine Ahn
What Trump and Biden Get Wrong About North Korea

Juan Cole
The Black Hole of Depressions: Doing Nothing About Climate Emergency Could Cost More Than All the Wealth in the World

Cassandra Carver
Voting Will Not Save Us, But We Must Show Up Anyway

END_OF_DOCUMENT_TOKEN_TO_BE_REPLACED

In a mind-numbing, butt-freezing, metaphor-rich shitshow in Omaha, the guys who say they want to run the country just failed to run a parking lot after missing buses left thousands of often older rally-goers stranded for hours in frigid temps in search of their cars. Twitter had thoughts: It wouldn't be cold without thermometers, don't let hypothermia dominate your life, it's Obama's fault, and it is what it is: With Trump, you will always end up abandoned in a cold, dark place.
Read More...
END_OF_DOCUMENT_TOKEN_TO_BE_REPLACED