SUBSCRIBE DONATE
Published on
Friday, July 24, 2020
by
Fairness and Accuracy In Reporting (FAIR)

This kind of story surely promotes a nihilistic outlook and undermines the efforts needed to convince a wary public to participate in a vaccination program—which really is something to panic about.

While there is much that’s uncertain about the search for a vaccine, these antibody studies are not cause for despair. (Photo: Screenshot)

“With Coronavirus Antibodies Fading Fast, Vaccine Hopes Fade, Too,” read a recent headline in the San Francisco Chronicle (7/17/20). As of July 20, it was the most popular article on the paper’s website—which isn’t surprising, given that it stokes one of many people’s greatest fears right now, which is that there will be no clear end in sight to their completely upended lives. But is it true? Or just clickbait? 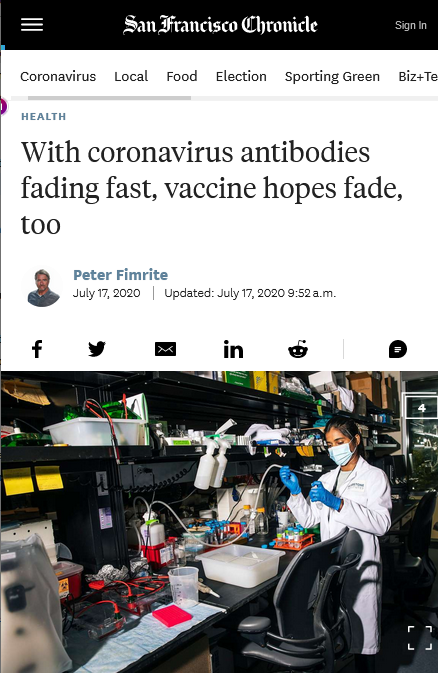 The Chronicle wasn’t alone in its doomsday reporting. At Fortune  (7/13/20), under the headline “Vanishing Antibodies Could Doom the Race to Develop a One-and-Done Coronavirus Vaccine, Study Shows,” Katherine Dunn’s lead warned of “a potentially huge blow to the global pursuit of developing an effective COVID-19 cure.” Forbes (7/15/20) ran the headline: “Study: Immunity to Coronavirus May Fade Away Within Weeks.”

Leaning on recent studies, these articles seemed to offer hard scientific evidence to support their suggestions. The Chronicle article began with a dire pronouncement:

Disturbing new revelations that permanent immunity to the coronavirus may not be possible have jeopardized vaccine development and reinforced a decision by scientists at UCSF and affiliated laboratories to focus exclusively on treatments.

The paper’s Peter Fimrite laid out the evidence, with the “latest bad news” coming in a study that found that only 17% of Covid patients in a small study still had “potent” antibodies a few months after the onset of symptoms.

In case you weren’t convinced, Fimrite wrote: “The report is the latest in a growing chain of evidence that immunity to Covid-19 is short-lived,” pointing to a study published in Nature (6/18/20) that came to similar conclusions. Fimrite summarized:

There is still hope that the remaining antibodies will bestow some immunity, but infectious disease specialists around the world were surprised and discouraged by the rapid reduction observed in the studies.

If you read to the end, though, you find that only one source is quoted who seems to take this stance—a molecular biologist whose work on treatments is referenced in the lead. The other expert who opined on the subject returned in paragraph 33 to note that the situation is “not hopeless,” since the human immune system uses both B cells and T cells, and these studies only look at the B cell response: “It may be that a T cell response does not require as many antibodies to be effective, she said.”

It’s a very important point, but Fimrite buried it and explored it no further, leaving one little “not hopeless” to counter the foregrounded “disturbing,” “bad news,” “jeopardized” and “discouraged.”

And Fimrite’s main source certainly seems to be either an outlier or seriously misconstrued. On Twitter, respected public health experts called the Chronicle article “dangerously misleading,” “garbage” and “alarmist kaka.”

Granted, it’s not easy being a journalist covering the pandemic. Scientific knowledge on the virus moves quickly, and experts don’t always agree. But that makes it all the more important to tread carefully and not spread alarmist kaka.

And some journalists are certainly succeeding at that. In the New York Times, for instance, Apoorva Mandavilli (6/18/20) reported the Nature study’s findings, but relayed experts’ cautions that rapidly falling antibody levels “does not necessarily mean that these people can be infected a second time.”

In fact, one of the experts she consulted argued that such studies “highlight the need to develop strong vaccines, because immunity that develops naturally during infection is suboptimal and short-lived in most people.” In other words, it means a vaccination program is even more important. 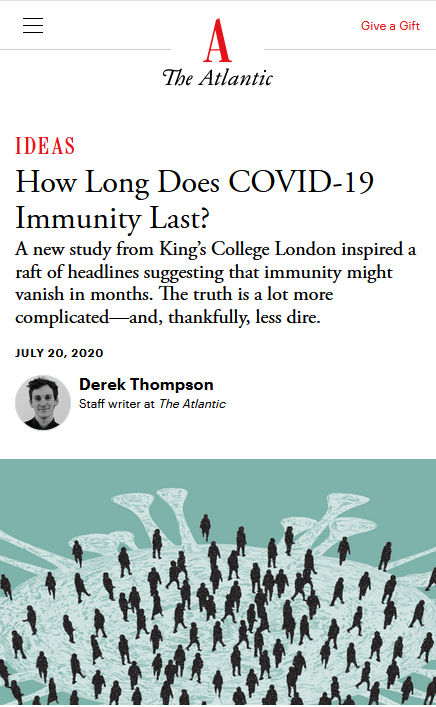 In the Atlantic (7/20/20), Derek Thompson directly worked to allay fears based on the recent reporting, interviewing several scientists to offer a more nuanced take on the research. The upshot—as also described by Mandavilli and other journalists, and hinted at by Fimrite at the end of his piece—is that the immune system is much more than its antibodies, so conclusions shouldn’t be drawn based on those levels alone. As Thompson writes:

Evaluating an immune response without accounting for T cells is like inventorying a national air force but leaving out the bomber jets. And, in the case of COVID-19, those bomber jets could make the biggest difference.

There’s evidence that people can have potent T-cell responses without detectable levels of antibodies.

There are also memory B cells that can be triggered by a second infection and begin producing antibodies, Mandavilli and Thompson both reported. Finally, finding fading antibodies is not even unusual; for some vaccines, antibodies drop dramatically some months after peak levels, but still protect people for decades.

In other words, while there is much that’s uncertain about the search for a vaccine, these antibody studies are not cause for despair. But the problem of the clickbait headline and accompanying reporting goes beyond its impact on readers’ mental health; this kind of story surely promotes a nihilistic outlook and undermines the efforts needed to convince a wary public to participate in a vaccination program—which really is something to panic about.

Juan Cole
We Could Have Greened Half the US Electrical Grid With $2.26 Wasted on Afghan War

END_OF_DOCUMENT_TOKEN_TO_BE_REPLACED

In this week's glass-half-full/half-empty news on COVID, half of Americans have now been vaccinated while all adults can be, and thousands of raving, paranoid, superspreading wingnuts just gathered in Tulsa - which evidently didn't learn anything from its last superspreader - to shriek "Q is the truth," argue vaccines are actually "experimental gene therapy," praise public hangings, and burn masks. Its woeful lesson: "Stupidity is the real epidemic."
Read More...
END_OF_DOCUMENT_TOKEN_TO_BE_REPLACED