The 15 most rural states would face heavy blows to jobs, revenue, mail and package deliveries, and voting rights.

As postal workers strain to meet demand for deliveries of medicine, food, and other essentials, the U.S. Postal Service is facing potential financial collapse due to plummeting mail revenue. Without a major cash infusion, the USPS is on track to run out of money before the end of September, according to the Postmaster General.

A USPS shutdown would be devastating for the entire country, but especially for the rural communities that rely most on a public service with a universal mandate to serve every address, no matter how remote.

A new Institute for Policy Studies report finds that the 15 most rural U.S. states would face heavy blows to jobs, revenue, mail and package deliveries, and voting rights.

The U.S. Postal Service is a critical source of decent jobs and revenue in rural states

In the 15 states with the largest share of their population in rural areas, more than 75,000 people work directly for the Postal Service — more than are employed in many other major job categories. The total mailing industry employs nearly 700,000 people and generates more than $150 billion in revenue per year in these heavily rural states. Twelve of these states have larger than average shares of 65 and older residents, a group that tends to rely heavily on USPS for medicine, bill paying, and other services. 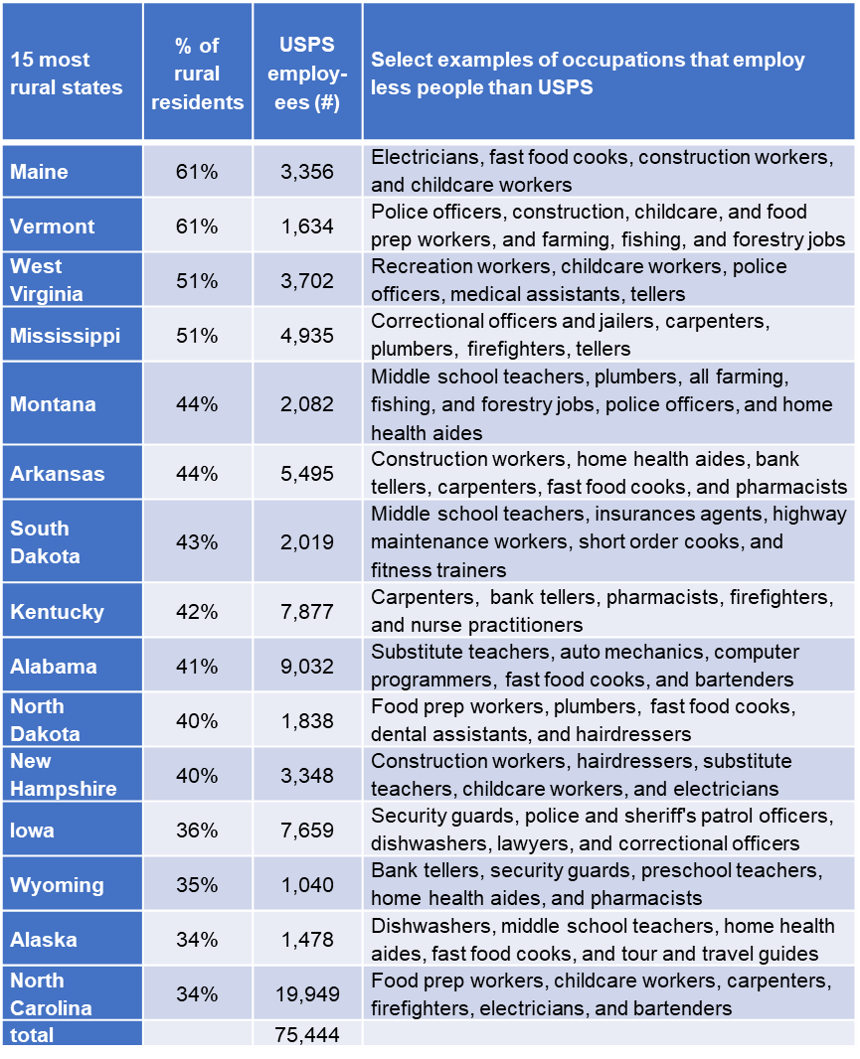 USPS provides service at uniform and reasonable rates, delivering to 157 million addresses at least six days a week, no matter where they live. The Postal Service uses revenue from more profitable services to cover much more expensive rural services. This allows it to not charge extra for deliveries to remote areas — unlike private carriers. UPS and FedEx charge more for deliveries to ZIP codes that are home to approximately 70 million people, or approximately 21 percent of the U.S. population. Without competition from the public Postal Service, for-profit firms would likely further hike fees or halt deliveries altogether on less profitable rural routes.

UPS, FedEx, and Amazon rely on the USPS to handle the “last mile” of their package deliveries, particularly in rural areas where USPS is the only carrier with a door-to-door network. USPS handled an estimated 55 percent of the final stretch of Amazon’s deliveries in 2018. For Fedex, the most recent available estimate is that USPS handled 30 percent of their total ground packages. These figures are no doubt much higher for rural deliveries.

Many rural residents get medicine and other essentials through the mail

Across the country, an estimated 20 percent of all Americans over 40 who are prescribed medication for a chronic condition get their prescriptions exclusively through the Postal Service. An even greater share of the rural population relies on mail order prescriptions since so many pharmacies in rural communities have shut down. Veterans, nearly one-quarter of whom live in rural communities, receive 80 percent of their prescriptions through the mail. Under the COVID-19 pandemic, of course, USPS is delivering medicine, food, and other essentials to a much larger swath of the U.S. population. Even in normal times, Alaskan villages, Maine islands, and other remote areas rely on USPS for food and other vital goods.

The FCC estimates that 14.5 million rural residents lack broadband access. This suggests that rural residents make up a disproportionate share of the estimated 18 percent of all Americans who pay their bills by the mail. USPS also allows sending of greeting cards and other first-class mail not handled by UPS or Fedex. USPS has 31,000 post offices in most ZIP codes in America. 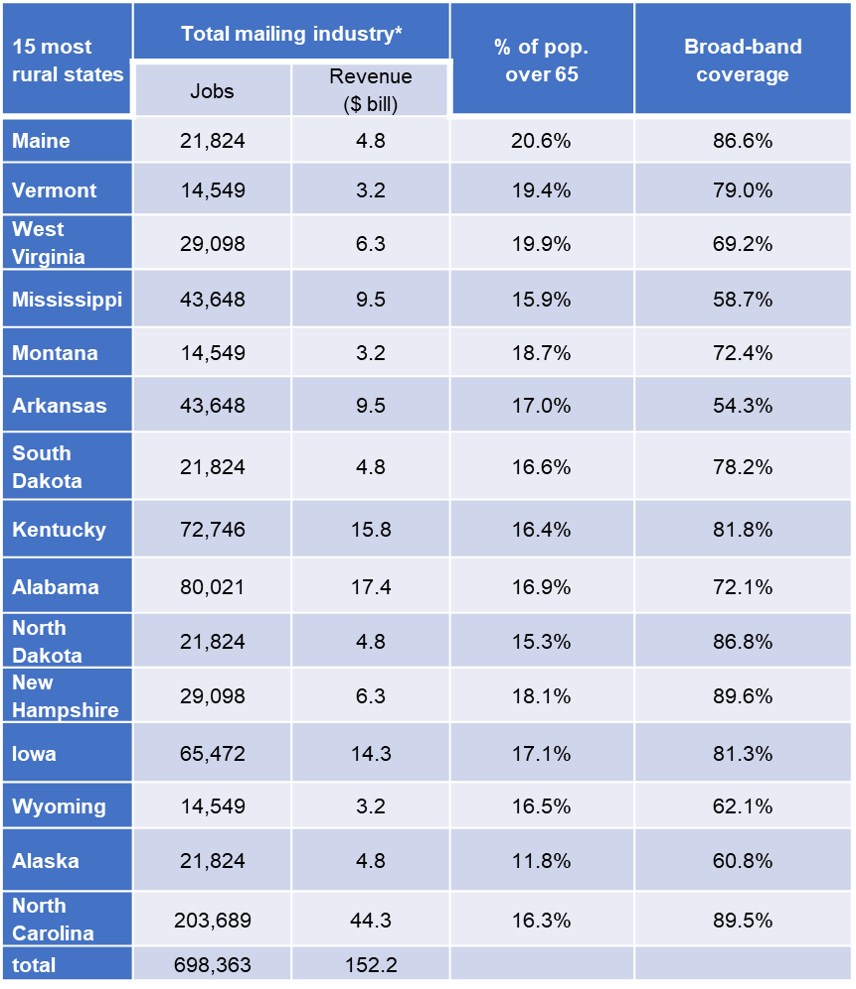 Even in “normal times” (without a pandemic), many rural residents either must vote by mail or find it much more convenient to do so. In Minnesota, for example, 130,000 people in towns and townships with less than 400 voters automatically get mail ballots because they do not have physical polling sites. Rural voters are older on average than other voters and often have long drives to their nearest polling places. Vote by mail helps them exercise their fundamental democratic right to vote.

Although bipartisan lawmakers agreed to an emergency direct aid plan in March, President Trump intervened to strip it from the $2.3 trillion stimulus bill and has vowed to block any future proposals for USPS grant aid of the type offered to the airlines, small businesses, hospitals, and Amtrak. Instead, the CARES Act included only the possibility of a $10 billion loan, subject to draconian conditions that the PMG and postal board have thus far rejected.

Trump has repeatedly claimed that the USPS itself is to blame for its financial problems because it loses money on every Amazon package delivery and should simply jack up delivery rates. This claim is completely unfounded.

Sarah Anderson directs the Global Economy Project of the Institute for Policy Studies, and is a co-editor of Inequality.org.

Scott Klinger is Senior Equitable Development Specialist at Jobs with Justice and an Associate Fellow at the Institute for Policy Studies.

Brian Wakamo is a researcher on the Global Economy Project at the Institute for Policy Studies.

John Dean: Insurrectionist Senators are Co-Conspirators and Should Not Sit in Judgment of Trump

In Defense of Civility

Osprey Orielle Lake, Katherine Quaid
Re-entering the Paris Climate Agreement Is Just Step One to Address the Climate Emergency: Frontline Women Must Lead the Way
END_OF_DOCUMENT_TOKEN_TO_BE_REPLACED
Connect With Us

END_OF_DOCUMENT_TOKEN_TO_BE_REPLACED

The veterans of the Great Capitol Insurrection, it seems, are not faring well. Scores of rioters have been arrested, many moronically incriminating themselves en route; investigations are finding the Trump campaign supplied untold millions to the pre-riot rally, often via shell companies and dark money that could constitute illegal money laundering; and weary Americans breathlessly await the spectacle of a Trump impeachment trial for what Chuck Schumer just called inciting "the erection."
Read More...
END_OF_DOCUMENT_TOKEN_TO_BE_REPLACED