A firefighter sprays foam retardant on a back burn ahead of a fire front in the New South Wales town of Jerrawangala on Jan. 1, 2020. (Photo: Peter Parks/AFP/Getty Images)

Since September 2019, Australia has been ravaged by bushfires. You know the statistics: about 18 million acres burned, around 2,000 homes destroyed, and nearly 1 billion animals affected. The fires have also affected Aboriginal communities and lands.

On January 3, the small Aboriginal community of Mogo, New South Wales, was destroyed, including the homes of five members of the local Aboriginal Land Council and the Land Council building. In Victoria, the Aboriginal community of Lake Tyer has been on high alert, as the East Gippsland bushfires burn just 20 kilometers away. Indigenous Protected Areas—reserved areas of land managed by local Indigenous people—have been devastated as well. Russell Irving, project coordinator at the Minyumai Indigenous Protected Area in New South Wales, noted in a November statement that, “We and many of our small-scale farmer neighbours are at threat of becoming members of the rapidly growing number of climate refugees in our own country.”

Historically, bushfires in Australia were a lot less common than they are today. Climate change is partially to blame. Temperatures have risen dramatically in Australia over the last century, causing more extreme droughts and unpredictable fire seasons. But the ongoing impacts of colonialism—including poor land management—is also part of the puzzle. For tens of thousands of years, Aboriginal Australians managed their environment through controlled burns. These fires continue to shape Australia’s landscape. In the Central Arnhem region in northern Australia, for example, a study found kangaroos were more abundant in areas that had been burned by Aboriginal people, because the grass in burned areas was more nitrogen-rich than grass in non-burned areas.

This intimate relationship with the land was violently interrupted by colonization. When colonizers first arrived in Australia, they took note of the Indigenous peoples’ use of fire. In 1889, British explorer Ernest Giles wrote: “The natives were about, burning, burning, ever burning; one would think they…lived on fire instead of water.”

Knowledge of cultural burning was suppressed through displacement from their homelands, forced assimilation, banning of Indigenous languages, and other practices over centuries. Until 1992, Aboriginal people had extremely limited rights to their own land: Australia had previously operated under the idea that the land was “unowned” before colonization and Indigenous people were not legally recognized as traditional stewards. Today, thanks to decades of activism and lawsuits, Aboriginal Australians control 6.1 million hectares of land. The land reclamation movement has in part focused on revitalizing traditional fire management.

Cultural burning, on the other hand, strengthens ecosystems.

Contemporary revitalization of traditional fire practices began in the 1990s in Cape York, Queensland, with elders Dr. Tomin George and Dr. George Musgrave. In an interview with the podcast Right Country, Right Fire, Tagalaka filmmaker and traditional fire practitioner Victor Steffensen reflected on the beginning of the movement: “Those old people are walking encyclopaedias and you know, they knew how to look after our own country. Yet no one was listening to them, the authorities weren’t listening…and the young people weren’t picking that knowledge up.” So he started to record Dr. George and Dr. Musgrave’s knowledge and educate others. In 2008, they hosted the first national Indigenous fire workshop based on the elders’ knowledge. Though Dr. George and Dr. Musgrave have passed away, activists such as Steffensen continue to hold the fire workshop, educating hundreds of Indigenous Australians and allies through national workshops, community-based trainings, podcasts, and partnering with universities.


Aboriginal fire management, also called cultural burning, involves an intimate relationship to the land. It is not one specific technique, but a localized understanding of what is needed for the environment at the time. If the fire is too hot, it may harm seeds and nutrients in the soil. Cultural burners often avoid burning logs or trees where animals and insects live. While the Aboriginal fire management is proactive, Western-style controlled burning, also called hazard reduction burning, is reactive.

Hazard reduction burning is often done by dropping incendiaries from planes, making it more cost effective, but less controlled. There is growing evidence that this style of burning may not even reduce bushfires, especially in times of extreme drought. A 2015 study in 30 bioregions in Australia found that controlled burns only reduced the amount of land damaged by bushfires in four of the bioregions, but overall, the study concluded, Western-style controlled burning had very little impact.

Cultural burning, on the other hand, strengthens ecosystems. The Bega Local Aboriginal Land Council in New South Wales implemented cultural burning in 2017. In 2018, intense bushfires were in the region, destroying nearly 100 homes and leaving the forest black and bare. Yet six months later, in areas where cultural burning had taken place both before and after the fire, regrowth had already begun. By burning after the fire, traditional fire practitioners were able to prevent invasive species from growing. 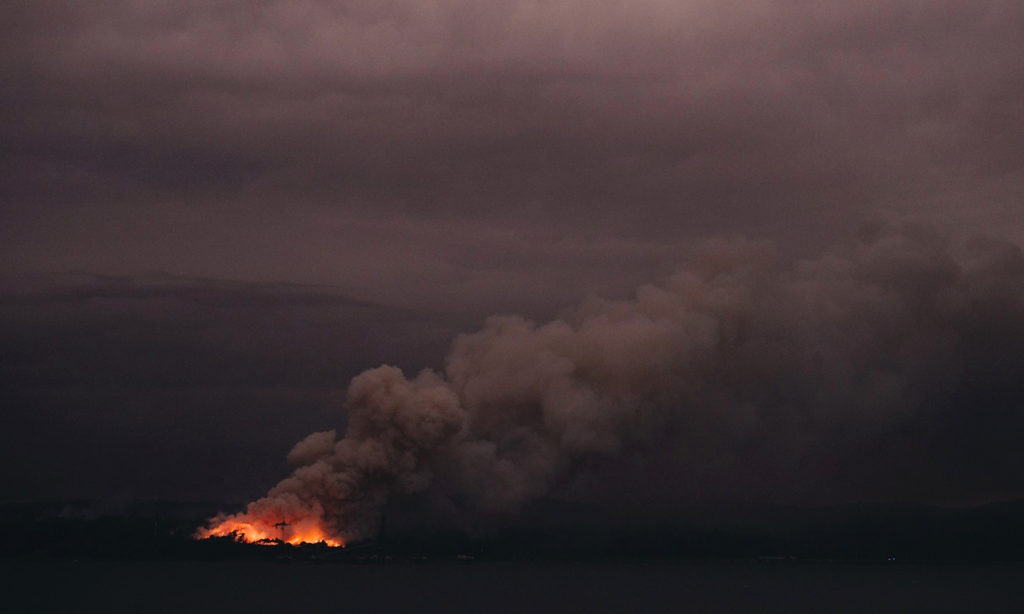 As bushfires in Australia continue to increase in intensity, Aboriginal land management—like cultural burning—may be a crucial part of the solution. “All these government departments, environmentalists, national parks, farmers and pastoralists have the best intentions but they all have their different interests,” said Steffensen in a December 17, 2019, interview with Insurance Journal. “Doing it our way on a continent-wide scale would be costly and take up a lot of working hours, but in the long run it could save billions.”

Climate change is a key factor in why these fires are so abrasive. Australia is hotter and drier than it once was. But Western-style land management—and the history of colonization and suppression of Aboriginal land management—has played a role as well.

“It’s our cultural obligation to do these sorts of things,” said Peter Dixon, a cultural burn crew member for the Bega Local Aboriginal Land Council, in an interview with ABC Australia. “And it has been for thousands of years.”

Abaki Beck is a public-health graduate student and freelance writer. She writes about Indigenous feminisms, Indigenous science and knowledge, and gender-based violence in Native communities.

It's Not Too Late to Reverse Course on the Climate Crisis

END_OF_DOCUMENT_TOKEN_TO_BE_REPLACED

Minutes before the Derek Chauvin verdict, a white cop in Columbus, Ohio shot and killed Ma'Khia Bryant, 16, a black girl in foster care who was threatening another girl with a knife. Many details are unclear - it was reportedly Bryant who called police when older girls were attacking her - but goddamn why can't cops disarm a 16-year-old girl without pumping four shots into her chest within seconds of arriving? Just kidding. We know why.
Read More...
END_OF_DOCUMENT_TOKEN_TO_BE_REPLACED