SUBSCRIBE DONATE
Published on
Friday, July 26, 2019
by
Fairness and Accuracy In Reporting (FAIR)

Why are Democratic candidates going on about student loan debt? Why, the problem is practically solved already!

That’s the message of a piece in The Upshot (7/24/19)—the New York Times‘ project aimed at “examining politics, policy and everyday life in new ways”—written by Kevin Carey, who directs education policy at the New America foundation. (New America’s higher education program is largely funded by Bill and Melinda Gates.) 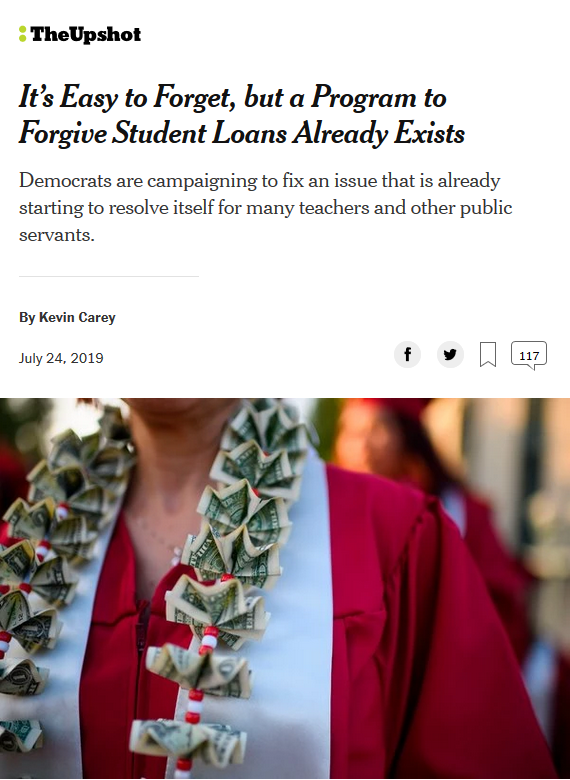 “It’s Easy to Forget, but a Program to Forgive Student Loans Already Exists,” is the headline. The subhead clarifies: “Democrats are campaigning to fix an issue that is already starting to resolve itself for many teachers and other public servants.”

What’s strange about the new crop of proposals is that the Department of Education already has a public service loan forgiveness program, called PSLF, which President George W. Bush signed into law in 2007.

Sure, Carey admits, almost no one who applies for this program has their debts forgiven:

In the 18 months after borrowers with a decade of service in government or nonprofit jobs first became eligible in 2017, 73,554 people applied to have their student loans wiped out. And 73,036 were turned down—a rejection rate of 99.3 percent.

But that’s a problem that’s going to work itself out over time, Carey explains at great length—applicants will figure out over time how to make themselves eligible for this extremely convoluted program. The bottom line, writes Carey:

So nearly half of $870 billion in debt is eligible for loan forgiveness, and one in four workers have jobs that qualify them for that program. If you do the math, that’s very roughly $100 billion that could theoretically be forgiven—or about 6 percent of the $1.6 trillion in outstanding student debt.

The upshot, according to Carey: What are these candidates belly-aching about?

Democrats competing to help teachers and other public servants with loans may be about to spend hundreds of billions of dollars to fix a problem that is already on the way to being solved.

Or 6 percent of it, anyway.

Lawrence Mishel, Jori Kandra
Over Last 30 Years, Wages for Top 1% Soared by 160% While Wages of Bottom 90% Actually Went Down
END_OF_DOCUMENT_TOKEN_TO_BE_REPLACED
Connect With Us

END_OF_DOCUMENT_TOKEN_TO_BE_REPLACED

Oh dear, the Who Gives A Fuck About Christmas Wit ch has done it again. Cue a vacant-eyed, stiletto-heeled Melania strolling a White House packed with blinding, sparkling, twinkling, gazillion-dollar displays like a woman who got lost looking for the bathroom in a strange museum to "pay tribute to the majesty of our great Nation," now convulsed by death, fear and poverty thanks. She wishes us a season "overflowed with love, joy, peace, hope, and faith." Like she said, give us a fucking break.
Read More...
END_OF_DOCUMENT_TOKEN_TO_BE_REPLACED