SUBSCRIBE DONATE
Published on
Thursday, June 06, 2019
by
Fairness and Accuracy In Reporting (FAIR)

One might have thought that, when drawing a line between Pulitzers and prison, corporate media would instinctively err on the side of caution and go to bat for Assange

The problem of journalistic demarcation is no less ideologically motivated and, through their effort to discredit Assange and WikiLeaks, corporate media have snugly aligned themselves with the contemporary brokers of US imperial power against a journalistic movement. (Photo: Matt Dunham / AP)

After British police arrested Julian Assange on April 11, the first instinct of corporate journalists was to perform a line-drawing exercise. In so doing, corporate media dutifully laid the groundwork for the US Department of Justice’s escalating political persecution of the WikiLeaks founder, and set the stage for a renewed assault on a free and independent press by the Trump administration. 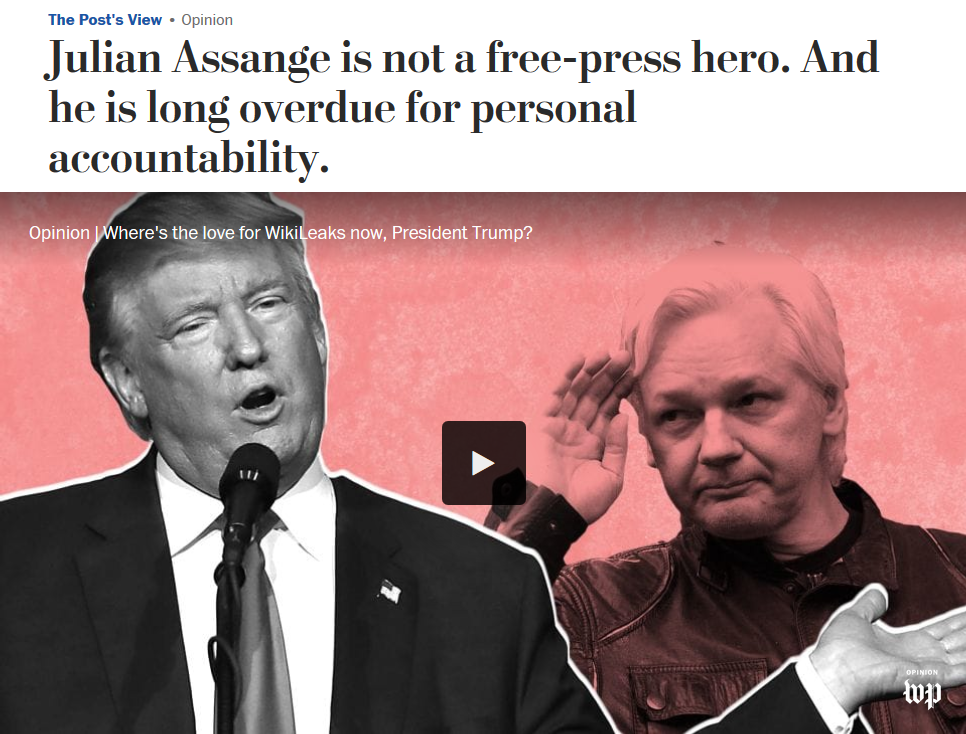 Following the philosopher of science Karl Popper, I’ll call this the problem of journalistic demarcation. Facing his own demarcation problem in 1953, Popper set out “to distinguish between science and pseudoscience.” This philosophical exercise had an overtly political purpose: Popper hoped to draw his line in such a way as to specifically exclude Marxism from the ranks of scientific theory. Stripping Marxism of its claim to scientific status would help undermine the legitimacy of a political movement that, at the time, posed a serious challenge to the ascendancy of Western capitalist powers following World War II.

The problem of journalistic demarcation is no less ideologically motivated and, through their effort to discredit Assange and WikiLeaks, corporate media have snugly aligned themselves with the contemporary brokers of US imperial power against a journalistic movement that, over the last decade, has presented them with their most significant challenge.

As Assange’s asylum was violated and he was dragged out of the Ecuadorian embassy in London at the behest of US authorities, the DoJ unsealed an indictment against him carrying one conspicuously minor charge. Despite their much-ballyhooed skepticism toward the Trump administration, corporate media instantly took the bait and drew their line. 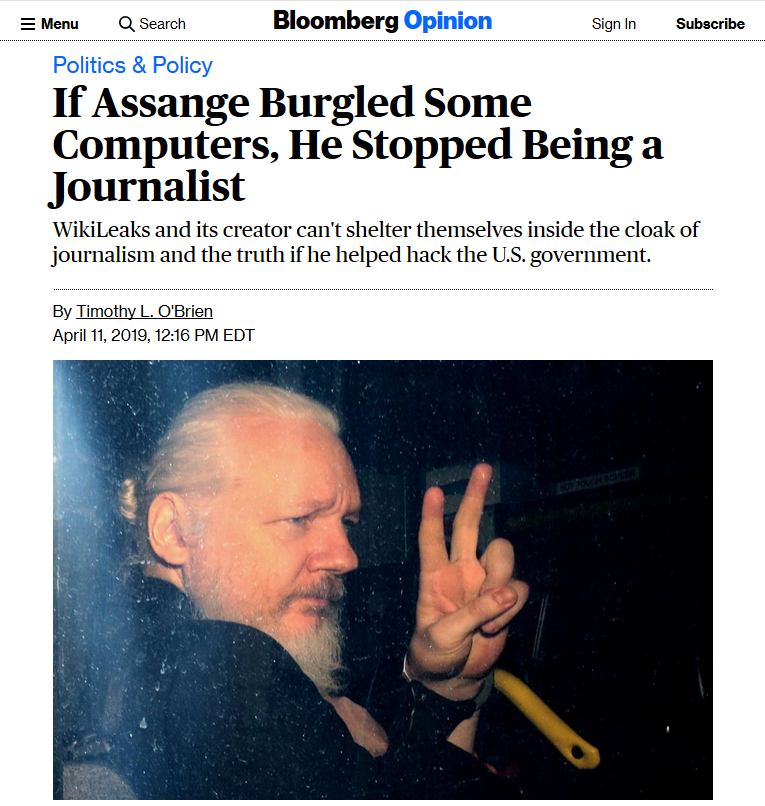 Alan McLeod detailed for FAIR.org (4/18/19) that, because the Trump administration had “done well” by only charging Assange with conspiracy to “hack” a government computer, the prevailing corporate media response was to exclude him from the ranks of journalism. “If Assange Burgled Some Computers, He Stopped Being a Journalist,” read a paradigmatic headline at Bloomberg (4/11/19). This reaction intersected normal partisan boundaries, with a similar line collectively drawn by the Washington Post (4/11/19), National Review (4/12/19) and Fox News (4/12/19).

Individual journalists also took to social media to exile Assange from their profession. Katie Benner, a Justice Department reporter for the New York Times, tweeted (4/11/19) that true journalists “don’t help sources pick the locks on the safes that hold the information.” David Corn (Twitter, 4/11/19), the DC bureau chief for Mother Jones, similarly drew a line between himself and Assange: “As a journalist, I’ve been careful to distinguish between accepting info and inducing or helping leakers break laws to obtain information,” he declared.

When the US DoJ predictably superseded its initial indictment of Assange on May 23, charging him with 17 additional counts of espionage, corporate media’s demarcation problem just as predictably blew up in their faces. As Assistant Attorney General John Demers announced the new charges, he boldly traced the all-important line, guided by corporate media’s hand: “Julian Assange is no journalist,” he asserted.

Because the new indictment is significantly more severe and relates to WikiLeaks’ publication of classified material, not just with how that material was obtained, corporate media are now unsurprisingly questioning the line they were so eager to draw. The New York Times (5/23/19) no longer thinks the Trump administration is doing well by Assange. Bloomberg (5/23/19), the Washington Post (5/24/19) and Fox News (5/30/19) are also having second thoughts.

David Corn (Twitter, 5/25/19), for whom the line was so clear a month ago, now sees “a threat to journalists.” Katie Benner apparently deleted her previous demarcation tweet and has since contributed to a new article (New York Times, 5/23/19) about the “frightening charges” now facing Assange.

It is impossible to accept that corporate media were simply naïve to the inevitability of further charges against Assange. Moreover, we have known all along that, as C.W. Anderson said nearly ten years ago, “it’s very hard to draw a line that excludes WikiLeaks and includes the New York Times” (CFR, 12/23/10). So why the sudden change of heart?

Here Popper’s demarcation question about science becomes relevant, not only formally but also substantively, because WikiLeaks is a vehicle for what Assange calls “scientific journalism”—an approach that threatens corporate journalism.

Assange wrote in a 2010 op-ed that WikiLeaks aspires to “work with other media outlets to bring people the news, but also to prove it is true.” “Scientific journalism,” he explained,

allows you to read a story, then to click online to see the original document it is based on. That way you can judge for yourself: is the story true? Did the journalist report it accurately?

This considerably ups the ante in terms of professional accountability for journalists. While corporate media are content with sourcing “people familiar with the documents,” for WikiLeaks obtaining and publishing those documents is not just a bonus or a lucky break, it is a requirement.

This documentation-based journalism precludes the blockbuster fabrications that make corporate media boatloads of money, from never-opened bridges in Venezuela to the entire #Russiagate debacle. Readers can’t click online to see whether the Guardian’s story (11/27/18) about a secret meeting between Paul Manafort and Assange is true, because it simply isn’t true.

So long as the persecution of Assange seemed only to do with his particular style of journalism, corporate media were happy to throw him under the bus. Now seeing that their own jobs could get caught up in the collateral damage (Consortium News, 6/5/19), all of a sudden corporate media are scrambling to erase their line. 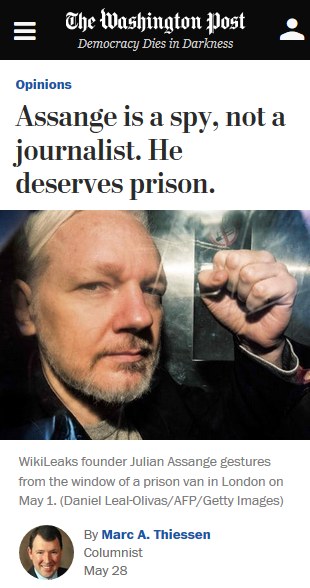 Meanwhile, much has been made, both by corporate media and the US officials pursuing him, of Assange’s supposedly inadequate harm-prevention effort in releasing unredacted classified documents. Marc Theissen of the Washington Post (5/28/19), for example, reproduced the US’s latest indictment at length to illustrate the “unfathomable damage” allegedly caused by WikiLeaks as it revealed actual crimes perpetrated by the US military.

Aside from the fact that there is no harm-prevention proviso in the First Amendment, and the further fact that the Pentagon previously could not demonstrate any harm stemming from the disclosures in question, it was actually the Guardian that released the password to the unredacted Cablegate archive (WikiLeaks, 9/1/11). Guardian editors disputed WikiLeaks’ characterization of this mistake, but not their paper’s role in it. Yet no one expects Alan Rusbridger to stand trial, or for the Washington Post to clamor to see him in the dock.

Corporate media jealously guard their self-anointed prerogative to set a limit on what the public may know. Ironically, while Popper sought to exclude Marxism from science because it was too occult, corporate media have sought to exclude WikiLeaks from journalism because it is not occult enough. In both cases, however, the division ultimately comes down to ideological rather than semantic lines.

In the wake of the Manning and Snowden leaks, Northeastern University professor Candice Delmas tried to nail down what it is about these events that provokes such uncritical reaction. Government whistleblowing of the sort WikiLeaks has enabled, she argued, amounts to a kind of “political vigilantism” that “involves violating the moral duty to respect the boundaries around state secrets, for the purpose of challenging the allocation or use of power.” This coheres with Assange’s own assessment: “We deal with almost purely political material—I don’t mean party-political, I mean how power is delegated,” he said in 2011.

Corporate media have made it clear that, Trump or no Trump, they remain ideologically committed to the objectives of US imperialism. Whether inciting war with Iran (FAIR.org, 10/4/18), promoting regime change in Venezuela (FAIR.org, 4/30/19), whitewashing crimes against humanity in Yemen (FAIR.org, 4/9/19) or downplaying the last three decades of occupation in Iraq (FAIR.org, 4/16/19), it is evident that corporate media retain little interest in challenging US imperial power.

Still, one might have thought that, when drawing a line between Pulitzers and prison, corporate media would instinctively err on the side of caution and go to bat for Assange. Instead, their ideological and vocational attachments to US power, along with their professional jealousy and fear of WikiLeaks, rendered him a political target who was simply irresistible…at least until now.

Corporate media’s belated and self-interested reinvestment in the Assange case might have come too late, both legally and with regard to the humanitarian situation. The UN special rapporteur on torture, Nils Melzer, recently reported that Assange’s prolonged isolation and crushing political persecution are now manifesting as “intense psychological trauma.” Even in a best-case legal scenario, he may never fully recover.

Legally speaking, despite their newfound concern, this isn’t the last we will hear of corporate media’s demarcation problem. Insofar as the First Amendment issue rides on whether Julian Assange is a journalist, US prosecutors will no doubt introduce the litany of unsympathetic line-drawing exercises provided by corporate media journalists as evidence that he does not qualify for protection. Sadly, this means that, should the Trump administration’s campaign succeed, Assange will indeed have been convicted by a jury of his peers.

We Must Defeat the Far-Right Insurrectionist Movement. Here's How

END_OF_DOCUMENT_TOKEN_TO_BE_REPLACED

Already, a sea change. Joe Biden and Kamala Harris held a searing memorial Tuesday for 400,000 Americans killed by COVID, the first public acknowledgment of the loss inflicted by a sick deadbeat missing the decency gene. "To heal, we must remember," declared Biden, his empathy feeling like water in the desert to many who didn't realize the depth of their thirst - especially after a Michigan nurse sang "Amazing Grace." "I'm not crying - you're crying," said one. "Let the healing begin."
Read More...
END_OF_DOCUMENT_TOKEN_TO_BE_REPLACED