SUBSCRIBE DONATE
Published on
Thursday, May 16, 2019
by
Oil Change International

415 ppm: We Are all Part of Exxon’s Unchartered Climate Experiment Now

415 ppm is a grim number. It signals we are in deep, deep trouble. (Photo: stopfundingfossils/flickr/cc) 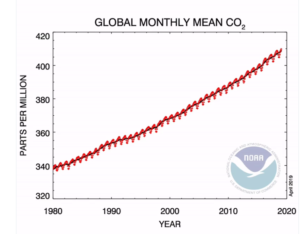 th, we collectively walked into the unknown.

We are all now a living experiment. Never before in human history have carbon dioxide levels reached 415 parts per million.

These levels were last seen maybe some 2.5-5 million years ago, during the Pliocene, but then the earth was much warmer than it is today and it was way before us.

Back then, there was no Greenland and trees grew near the South Pole. Sea levels were much, much higher. Maybe 25 metres higher.

415 ppm is a grim number. It signals we are in deep, deep trouble. And in the words of Rolling Stone magazine: “Further evidence (as if further evidence were needed) of just how hell-bent we are on cooking the planet we live on.”

To show you how much we are changing the climate: Every year another 2-3 ppm of carbon dioxide enters the atmosphere. Before the industrial revolution it was 280 ppm. And now it is 415 ppm.

We could have stopped the relentless rise of carbon dioxide, but we did not. In part the reason collectively we have failed to do so is the power of the oil companies and one of the most sophisticated public relations exercises ever undertaken to deny and obfuscate the truth.

The oil companies could have acted and kickstarted the renewable revolution, but they did not. But they knew. #ExxonKnew.

As Think Progress noted this week, one of the documents obtained by InsideClimate News into its investigation into what Exxon knew about climate science decades ago was an internal 1982 document from the Exxon Research and Engineering Company.

In this document the oil company mapped the “growth of atmospheric CO2 and average global temperature increase” over time.

Amazingly, as Think Progress highlights, “the company predicted that that, by 2020, carbon dioxide in the atmosphere would reach roughly 400 to 420 ppm. This month’s measurement of 415 ppm is right within the expected curve Exxon projected under its “21st Century Study-High Growth scenario.”

Exxon not only predicted the future, it knew how bad it could be.

Not only did Exxon predict the rise in emissions, it also understood how severe the consequences would be, including warning of “considerable adverse impact” of rising carbon dioxide levels, including flooding and the melting of the Antarctic ice sheet.

Exxon knew all this, but instead of acting, went on to pour tens of millions of dollars into a massive disinformation campaign that we still  see today being spouted by President Trump and Fox News.

No wonder climate scientists are alarmed at us reaching 415 ppm.

Professor Michael Mann told Think Progress “If you do the math, we’ll cross 450 ppm — which likely locks in dangerous planetary warming of more than 2C/3.5F — in just over a decade”.

Peter Gleick, the President Emeritus at the Pacific Institute for Studies in Development, Environment, added: “Not that we need it, but the latest numbers are further evidence of the massive impact humans are having on our atmosphere and climate … We are entering an era never before experienced by humans.”

This is the first time in human history our planet's atmosphere has had more than 415ppm CO2.

Not just in recorded history, not just since the invention of agriculture 10,000 years ago. Since before modern humans existed millions of years ago.

We don’t know a planet like this. We don’t know what will happen, except that climate chaos will get worse. We do know the answers, though.

As Oil Change International pointed out yesterday, in yet another groundbreaking report, we have to stop drilling. It really is that simple. Not tomorrow. Not today. But yesterday. We need a just transition now.

Predictably, the denial in the Trump Administration continues: This week, Donald Trump’s Interior Secretary said he had not “lost sleep over” over the 415 ppm figure.

David Bernhardt, who is a former oil and gas lobbyist, said “I believe the United States is number 1 in terms of decreasing CO2”. He added: “I haven’t lost any sleep over it.”

Meanwhile, just as Exxon warned that Antartica would be in trouble, there is new research published showing just how bad things are.

According to new academic research published in the Geophysical Research Letters, warming of the Southern Ocean now means that with ice is being lost from Antartic glaciers five times faster than in the 1990s.

It is yet another sign we are in deep, deep trouble.

The Last Stimulus Ignored Climate. Activists Are Determined That Won't Happen in the Next One.
More in:
Climate, U.S.
,
ExxonKnew, Environment, Fossil Fuels, Michael Mann

END_OF_DOCUMENT_TOKEN_TO_BE_REPLACED

As an impeached dumpster fire raves - Twitter was mean to him! Masks mean "social control"! - his abysmal failures have seen us not just hit the grisly milestone of 100,000 deaths but soar right past it: Thursday's toll was 102,794 and rising fast. In response, the Lincoln Project's harrowing new ad savages his "great job" claims with fast-accruing body bags, a chilling echo-chamber of his predicted "close to zero" deaths, and an urgent message: “100,000 dead Americans. One wrong president.”
Read More...
END_OF_DOCUMENT_TOKEN_TO_BE_REPLACED