The situation in Niger is devastating

In Niger, where agriculture is the main source of income, the message is simple: Losing your soil means losing your livelihood. The ability to grow food is inextricably linked to the productive capacity of the soil. In the case of Niger’s soil, the picture is bleak: The soils hold poor structural stability, low nutrient holding capacity, low water retention capacity… the list goes on.

Niger lies in one of the hottest regions in the world: The Sahel. Rainfall is short and unpredictable and Nigeriens face chronic water scarcity. In addition to the limited productive capacity of the soil, the Sahel has been plagued by soil degradation. Wind erosion, the main cause of soil loss, sees suspended soil particles travel thousands of miles in hazardous dust storms.

Soil degradation is instigated by climatic factors and compounded by anthropogenic factors. High temperatures trigger high evaporation rates, which cause the soil to form impenetrable surface crusts that rain cannot penetrate. Extreme rainfall events thus lead to flooding and the erosion of topsoil, the only horizon (the scientific term for a soil layer) with mildly productive capacities. Human land use has further aggravated the problem of soil erosion.

Niger exhibits one of the world’s highest population growth rates. Between 1960 and 2018, the capital, Niamey, has grown from a population of 30,000 to one of 1.2 million. The resulting agricultural intensification has led to the conversion of natural, woody savannahs to cultivated lands. Overgrazing and the loss of vegetation cover has reduced soil fertility and spurred soil loss. The situation is bound to worsen with climate change and the intensification of the hydrological cycle. 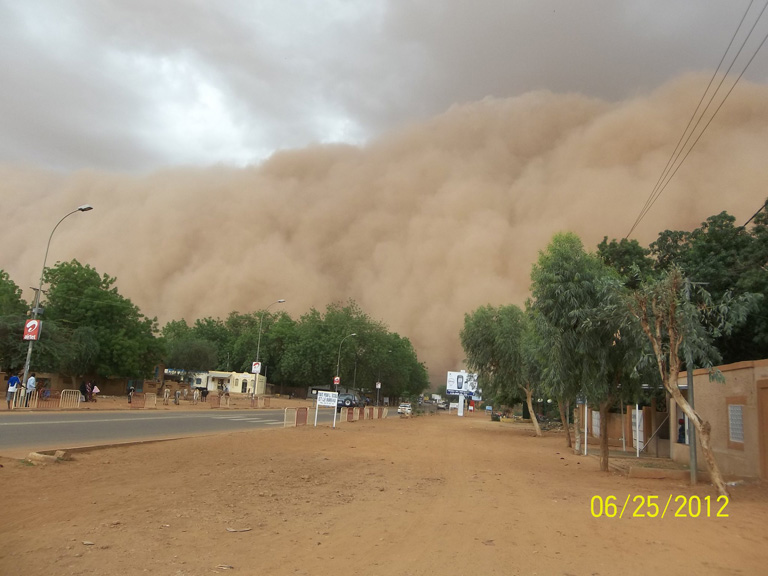 What does this mean for the future of Niger’s soil and the livelihoods of its millions of dependents? How can soil management be improved in a region that has little to no resources? It is indisputable that Niger should reverse unsustainable agricultural practices, but how realistic is this when the very livelihood of Niger’s people depends on extracting the maximum benefit from the soil? Niger, according to the 2018 United Nations Human Development Index, is the poorest nation on earth. How can it deal with its soil situation?

One proposed solution is agroforestry. Deliberately planting trees in association with crops, pasture, and livestock could help reduce soil erosion through stabilizing root systems. Some trees have the ability to fix nitrogen and can thereby increase the productive capacity of the soil. Their canopy’s shade provides immediate relief to all creatures, large and small, and puts a limit on direct evaporation from bare soil. Leaf litter helps with the soil’s deficient organic matter content and improved soil drainage can reduce flashy runoff and ultimately erosion.

Another option to relieve the soil of some of its burden is to limit overgrazing by returning to practices of migratory herding. Migratory herding had been common practice in pre-colonial Niger and allows the soil to recover between cycles of grazing.

Lastly, a soil management technique, known as conservation agriculture, which minimizes the disruption of the soil’s structure, has been proven successful in many arid and nutrient-limited areas of the world. The results have shown increased crop yields and long-term sustainability in farming.

The situation in Niger is devastating. Soil erosion has become a deleterious threat to livelihoods, bringing soil protection to the forefront of governance issues. Environmental scientists and managers need to do a better job at conveying the urgency of the matter of soil erosion. The future of Niger depends on the future of its soil.

Sophie Erfurth holds a BSc in Geography from University College London and graduated from Duke University with a Master’s of Environmental Management. A hydrologist by training, she is interested in the implications of environmental management on governance and peace-building efforts. Sophie will be working as a hydrogeologist with the Niger Basin Authority on ways to improve transboundary water management.

Jeffrey D. Sachs
Why America Has the World's Most Confirmed Covid-19 Cases...
END_OF_DOCUMENT_TOKEN_TO_BE_REPLACED
Connect With Us

END_OF_DOCUMENT_TOKEN_TO_BE_REPLACED

As Trump's lies and boasts and deadly fictions mount with the virus - we now have a record 82,404 cases - so does the urge to shut him up. A Seattle public radio station has stopped airing daily briefings that "offer no public benefit," and other media are cutting back and fact-checking. Still, the atrocities keep coming: Trump just sicced his goons on TV stations showing a Democratic ad that (accurately) cites his murderous lies, arguing it's "false" and "misleading." Because, priorities.
Read More...
END_OF_DOCUMENT_TOKEN_TO_BE_REPLACED