We Know Protests Work. So Why Aren’t We Protesting?

Long-term protests for women’s suffrage and the civil rights movement, and against the Vietnam War captivated and defined entire generations and altered the political landscape

The mother of a man who died in Vietnam holds up a sign protesting U.S. involvement in the war during a demonstration in the 1970s. (Photo: Jonathan Blair/Corbis via Getty Images)

As I watched the massive protests of President Donald Trump and his policies in London during his visit earlier this month, I couldn’t help but hope that London’s fierce, festive display of resistance would remind Americans that this is no time to feel weary.

Apart from the Women’s March on Inauguration Day and its anniversary march this year, and the protests at airports in response to the Muslim ban, also last year, there have been few major protests against Trump and his policies, with the exception, perhaps, of the June 30 demonstrations against Trump immigration policies, which drew over 30,000 protesters in Washington, D.C., with 700 sites around the nation.

Protests work because they are a visual representation of what the public wants from its government on the local and national level. Protests are also part of citizenship: To protest is to exercise the right to engage and advocate for policy changes, which is foundational in a democratic society. Voting is important, but protest can make policies change even after votes are cast.

Historically, Americans are not strangers to protesting. Long-term protests for women’s suffrage and the civil rights movement, and against the Vietnam War captivated and defined entire generations and altered the political landscape. In each case, organizations and individuals fought against injustices by organizing, protesting and pooling time and resources to the cause. Their protests gained results: Women got the vote, the Civil Rights Act of 1964 and the Voting Rights Act of 1965 were passed, and the U.S. withdrew from Vietnam in 1973.

In the 1980s, the AIDS Coalition to Unleash Power (ACT UP) took over buildings ― St. Patrick’s Cathedral and the New York Stock Exchange ― as it engaged in radical protests. Now die-ins are a regular part of protests, but radical actions like ACT UP’s are rare. Despite the decline in violent protesting, proposed laws in over 20 states threaten to curb protests by promising arrests and convictions for doing what the Constitution has guaranteed all Americans: the right to peacefully assemble. Tennessee, Oklahoma, North Dakota and South Dakota have been successful in passing anti-protest laws.

In order to drive the national conversation, we need major and sustained national protests. Black Lives Matter protests both on local and national levels have, for the last five years, drawn attention to police violence against African Americans. That has not stopped the uptick in police killings, but it has ensured that those killings do not go unseen, unnoticed or unquestioned, in the U.S. and abroad.

Sustaining physical protests on a national level helps to keep issues at the forefront of the news. In 2016 and 2017, the “Candlelight Protests” in South Korea against then-President Park Geun-Hye are an example of how sustained, organized protests can convey a sense of urgency to governmental officials. These nonviolent protests rallied the country over 100 days, and they worked: They helped to remove President Park.

In order to drive the national conversation, we need major and sustained national protests.

There is a lesson to be learned from the Candelight protests: Sustaining effective large-scale protests requires a clear symbol ― in this case, President Park ― and a clear goal. A new book, History Teaches Us to Resist, by University of Pennsylvania history professor Mary Frances Berry, chronicles how resistance and protest through 20th century America have reshaped the political landscape. Using the March on Washington, anti-Vietnam protests and the anti-apartheid movement as examples, Berry writes, “it is important to realize that resistance works, even though it does not achieve all of the movement’s goals, and that movements are always necessary.”

There are so many issues at stake in American life at this moment: the future of Roe v. Wade, voting rights and LGBTQ rights, to name just three that will be affected by the confirmation of Trump’s latest Supreme Court nominee. The stakes are high. If organizers and protesters can focus on clear, concise issues that bring people together for a sustained national protest over a period of time, then we can begin to see the changes we seek, socially and politically.

An example of sustaining momentum is the recent protest that shut down the Dan Ryan Expressway in Chicago. Led by Father Michael Pfleger, this protest had one clear theme: ending gun violence and police brutality. The protest had clear demands for leadership to meet with youth groups to discuss joblessness and violence. While the violence has not ceased, Pfleger’s march added fuel to ongoing demands for an end to violence and police brutality in Chicago. 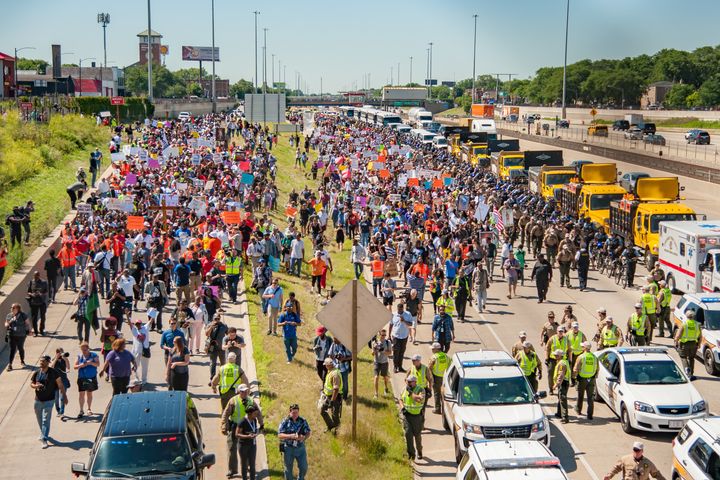 Protest and civil disobedience are the hallmarks of a democratic society. If we lose the momentum for this in an election year by not consistently protesting changes that are rapidly diminishing American democracy, we may find ourselves with new laws, such as the Antifa Act, which aims to send masked anti-fascist activists to jail for 15 years. Laws like this one are designed to keep people out of the streets to voice their dissent, and they have a chilling effect on protest.

Now more than ever is the time to protest. The rights of American citizens and immigrants who want to share in our democracy are only ensured if we continue to voice our dissent vociferously in America’s streets. Now more than ever is a time to protest. During the Montgomery, Alabama, bus boycott, in the 1950s, Mother Pollard said, “My feet are tired, but my soul is rested.”

If your feet are not tired, America’s soul will never be rested.

Anthea Butler is an associate professor of religion and Africana studies at the University of Pennsylvania. Follow her on Twitter: @AntheaButler

Safeguarding Elections Amid a Pandemic

END_OF_DOCUMENT_TOKEN_TO_BE_REPLACED

Following the rabid lead of anti-science evangelicals, the pastor of a Tampa megachurch who says his church will only close when the Rapture comes was arrested for risking his followers' and many more lives by defiantly leading two packed Sunday services. After busing congregants to his church - allegedly fitted with magic virus-killing gizmos - Howard-Browne urged them to shake hands and vowed their toilet paper would multiply if they trust in God. "Are you with me?" he asked. Actually, not.
Read More...
END_OF_DOCUMENT_TOKEN_TO_BE_REPLACED