Walk Softly. This Is Earth. We Have Much Still to Learn.

“When you go to dig your fields, or make a pot from clay, you are disturbing the balance of things. When you walk, you are moving the air, breathing it in and out. Therefore you must make payments.”

Oh, unraveling planet, exploited, polluted, overrun with berserk human technology. How does one face it with anything other than rage and despair, which quickly harden into cynicism? And cynicism is just another word for helplessness. 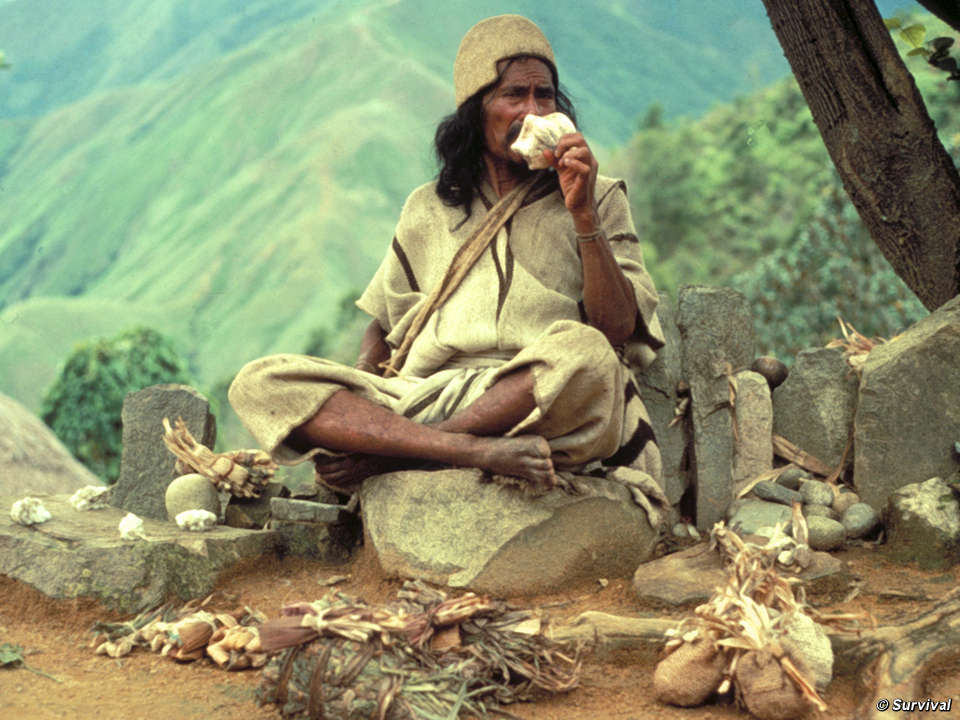 So I listen to the Arhuaco people of northern Colombia, quoted above at the Survival International website, and imagine — or try to imagine — a reverence for planetary balance so profound I am aware that when I walk I disturb it, so I must walk with gratitude and a sense of indebtedness. Walk softly, walk softly . . .

Instead, I live in this world:

“Deep sea ecosystems are under threat of mass industrialization, warned a panel of scientists on Sunday,” according to Common Dreams.

“Speaking at the American Association for the Advancement of Science meeting in Chicago, the scientists warned that without international cooperation with a focus on ‘deep-ocean stewardship,’ deep sea mining will follow the destructive examples set by commercial fishing and offshore fossil fuel operations.”

“Native Americans in the mid- and upper-mid West are not waiting idly as President Obama and the State Department finalize their ultimate decision on the Keystone XL pipeline which would transport tar sands — the planet’s dirtiest fuel — from mining operations in Canada to the U.S. gulf coast for export,” also according to Common Dreams.

“In Montana, North Dakota, South Dakota and Nebraska, tribal groups and indigenous activists are busy planning the best ways to resist the pipeline — which they have dubbed the Black Snake — if it gains approval.”

Chemical spills, radiation leakage, broken mountaintops, plastic waste that will never decompose, a depleted ozone layer, a floating garbage dump in the Pacific Ocean the size of a continent — all this, and so much more, are the result of normal life in the 21st century. And then there’s war, the biggest polluter of all, with its horrific, toxic aftermath, from depleted uranium contamination to unexploded bombs to the lingering animosity of the defeated, waiting to explode.

Maybe it’s the human condition that’s toxic, but I don’t really believe that. I don’t think it’s greed that is pushing us to the outer limits of self-destruction, but something more complex. Call it addiction, call it servitude. We’re trapped in obedience to a force that demands, in payment, everything that we value and everything that we are: our planet, our souls.

Consider, for instance, this looming matter of deep-sea mining and the inevitable disturbance of deep ecosystems. What could propel such reckless audacity? A panelist at a recent meeting of the American Association for the Advancement of Science simply described it, according to Common Dreams, as a “surge in demand for consumer devices, such as portable electronics and batteries for hybrid vehicles,” which, she said, “is pushing mining companies to expand their operations to the ocean floor to seek out hard-to-find rare earth elements such as nickel, cobalt, manganese and copper.”

I don’t think consumer demand — for throwaway high-tech paraphernalia — would drive the human race to the bottom of the ocean in search of rare metals, at some unknown but possibly terrible cost to the planetary ecosystem. I actually think most “consumers” would vote no on this activity, and so many others that have already occurred. I don’t think we’re so utterly separated from indigenous tribespeople that we can’t imagine and long for deep connectedness to our planet and a sense of responsibility for its continued state of delicate balance.

I think, rather, we’re driven, as a global culture, by the phenomenon of money, which is an invisible force more than it’s something tangible and graspable.

“Created as interest-bearing debt,” Charles Eisenstein writes in his excellent book, Sacred Economics, “(money’s) sustained value depends on the endless expansion of the realm of goods and services. Whatever backs money becomes sacred: accordingly, growth has occupied a sacred status for many centuries.”

The economy we’re caught in is out of control. It can’t stop growing. Thus it keeps pushing into new territory, consuming what Eisenstein refers to as “the commons,” i.e., the context in which we live: environmental, social, cultural, spiritual. Economic forces invade, claim and sell everything, from the split atom to our own imaginations. This is what we serve, and this is what we must stop serving. We have to learn what we once knew: how to live in grateful service to what we truly value.

To the Arhuacos, indigenous residents of the Sierra Nevada de Santa Marta mountain range, “the Sierra is the heart of the Earth and their role is to protect it,” according to Survival International. “. . . . Their religion, culture and cosmology are staggeringly complex.”

We know so much. I hope we don’t know too much to learn from the marginalized peoples of the world, who still value and strive to protect the context in which we all live.

'A Tangible Way to Fight for the World I Want to Live In': Water Protector Arrested After Blockading Line 3 Pipe Yard

END_OF_DOCUMENT_TOKEN_TO_BE_REPLACED

In a wrenching addendum to the drama of a day that saw the only U.S. president in history be impeached twice, the righteous charge to remove him was led by Maryland Rep. Jamie Raskin, whose 25-year-old son Tommy just died by suicide. The day after burying Tommy and feeling him " very much with me and my heart," Raskin was applauded by colleagues who knew of his loss as he came to certify the vote cut short by the riot; he did his duty because, "Change is made by people who show up."
Read More...
END_OF_DOCUMENT_TOKEN_TO_BE_REPLACED