As environmental organizations denounce climate change's near total absence from the second presidential debate, a new analysis highlights the starkly differing attitudes backers of Hillary Clinton and Donald Trump hold on the issue.

Released by the Pew Research Center and based on surveys conducted May 10-June 6 and Aug. 16-Sept. 12, the breakdown of the views covers whether the supporters care about climate change, if they believe it is caused by human activity, whether specific policy actions—such as restrictions on power plant emissions—will help address climate change impacts, and whether they think climate scientists understand causes of climate change.

The contrasts, Pew states, "mirror a deep divide between Democrats and Republicans."

Looking at whether human activity is responsible for climate change shows another deep divide. Seventy percent of Clinton supporters say it's the cause compared to 22 percent of Trump supporters.

The graphs below highlight the other varying responses: 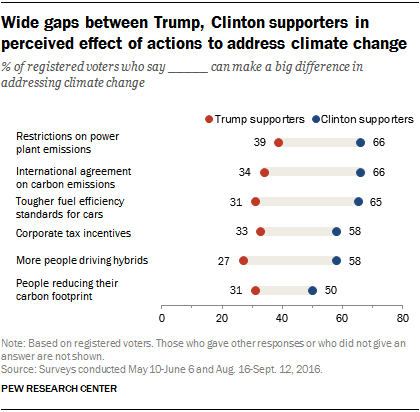 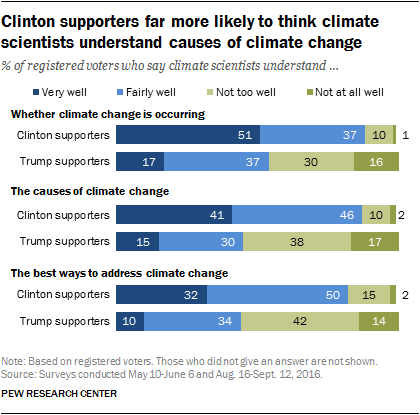 But the topic—"the issue on which future civilization hinges," as Erik Wemple writes at the Washington Post—was "all but ignored" during Sunday night's square-off between Trump and Clinton.

The presidential hopefuls were not asked the very direct "As president, what are the steps you will take to address climate change?" even though, as Wemple points out, that was the fourth most popular question submitted to the bipartisan Open Debate Coalition—and despite the fact that the debate took place as deadly Hurricane Matthew brings record flooding to the southeast, and as the planet has just experienced a 16-month stretch of record warm temperatures.

Rather, they were asked by "uncommitted voter" Ken Bone: "What steps will your energy policy take to meet our energy needs while at the same time remaining environmentally friendly and minimizing job loss for fossil power plant workers?"

Trump responded by saying the Environmental Protection Agency "is killing" energy companies. He also touted the inaccurately named "clean coal," and said, "Coal will last for a thousand years in this country."

Clinton, for her part, said that natural gas could serve as a so-called "bridge fuel." Her response did, however, give climate change its sole mention of the debate. "I have a comprehensive energy policy but it really does include fighting climate change because I think that is a serious problem. And I support moving to more clean and renewable energy as quickly as we can. Because I think we can be the 21st century clean energy superpower and create millions of new jobs and businesses," she said.

Climate advocacy group 350.org took to Twitter to highlight the lack of climate coverage in the debate:

What does it take to get a Presidential debate on climate change? Record setting storms? The hottest temperatures in human history?

What about a major occupation of a pipeline route by Native Americans? Major cities flooding at high tide? Because all these are happening.

The Presidential debates failure to address climate change is an example of how leaders everywhere have failed to take the crisis seriously.

"The candidates spent very little time talking about climate change during tonight's debate but it is on the minds of so many Americans, especially as Hurricane Matthew continues to take a heavy toll here and in Haiti. Climate change demands the attention of both candidates and their parties, and it is shameful that it was given so little," she stated.

New York Times columnist Paul Krugman wrote Friday that "nowhere is the gap [between the two major parties] bigger or more consequential than on climate." The divide, he added, "arguably matters more for the future than any of their other disagreements."

"So why does the media seem so determined to ignore this issue? Why, in particular, does it almost seem as if there's a rule against bringing it up in debates?" he asked.

"It's time to end the blackout on climate change as an issue. It needs to be front and center," he wrote, concluding that "letting it slide would be almost criminally irresponsible."

Surreal. Moments after threatening to unleash the military against his own people - aka "professional anarchists” - for the crime of seeking racial justice, our impeached reality show president had police teargas and shoot rubber bullets at peaceful protesters so he could hold a deranged, utterly pointless photo op, clutching a Bible in front of a church whose clergy were outraged. T hey were not alone. The horrified consensus among too many brutalized observers: Fascism has come to America.
Read More...
END_OF_DOCUMENT_TOKEN_TO_BE_REPLACED