The Honolulu remembrance was part of the Golden Rule Project’s educational program about the growing danger of nuclear war, and the great damage that has already been done by nuclear weapons.

At 15 megatons, 1,000 times the magnitude of the Hiroshima and Nagasaki nuclear weapons, the Castle Bravo bomb vaporized three islands and contaminated many others.(Photo: Golden Rule Committee Veterans for Peace)

Marshall Islanders living on O'ahu joined members of Veterans For Peace, Hawai'i Peace & Justice and Refuse Fascism on Monday, March 1st at Magic Island in Honolulu to remember the 1954 U.S. detonation of the “Castle Bravo” nuclear bomb on Bikini Atoll. After sharing words and song, five Bikinians went sailing on the historic Golden Rule anti-nuclear sailboat, a project of Veterans For Peace.

The Honolulu remembrance was part of the Golden Rule Project’s educational program about the growing danger of nuclear war, and the great damage that has already been done by nuclear weapons.

At 15 megatons, 1,000 times the magnitude of the Hiroshima and Nagasaki nuclear weapons, the Castle Bravo bomb vaporized three islands and contaminated many others. Despite a stern warning from the weather forecaster, Castle Bravo was blast on a day when the wind was blowing over the Marshall Islands population. Fine white radioactive fallout rained down on the islanders, with children playing in the “snow” and even eating it. The radioactive fallout from this weapon has forever devastated the lives of the Marshallese people, who continue to suffer from deadly cancers and other health problems. Many Marshallese have been forced to leave their beloved islands.

At the Honolulu commemoration, Bikinian men, women and children displayed a banner showing a large nuclear bomb mushroom cloud and reading, “We Are Not Alone.” Nixon Jibas, an elected Council member representing all Bikinians exiled to Kili and Ejit Islands, read a statement from his brother, Bikini Mayor Anderson Jibas. Highlights of the statement were:

"Today only 4 workers live on Bikini Atoll. Of the 167 people who were on Bikini on March 1, 1954, only 11 are still alive. The U.S. can clean up Bikini Atoll. America spent $142 million dollars every single day in the war in Afghanistan in 2018. Just 3 days of that budget would clean up Bikini and make right what is wrong and would bring recognition to the huge contribution Bikini has made to the U.S. defense capabilities.  Can we get some justice?

“When I say that the U.S. tricked the Bikinians into moving from Bikini, I mean they really were tricked. There were no lawyers representing Bikini when the U.S. came and asked Bikinians to move in 1946.  No one told the Bikinians that there would be 23 nuclear bombs exploded on their islands. For the past 20 years, the current Changed Circumstances Petition in Washington, DC has been tossed around like a beach ball between Congress, the Administration and the Courts.

“The Council and I led the successful effort to get control of the Bikinian Resettlement Trust Fund in order to recognize that the grossly unfunded "resettlement" would never become a reality unless the people of Bikini raise additional funds.  To that end, we have implemented revenue-raising projects , and projects meant to ease the hardships of his people living in exile.”

The Bikini Atoll exiles also shared a mournful song, written by a 33-year old Bikinian after being evacuated, and now the Bikinian Anthem. Here are the words, translated into English:

No longer can I stay; it's true.

No longer can I live in peace and harmony.

No longer can I rest on my sleeping mat and pillow

because of my island and the life I once knew there.

The thought is overwhelming

rendering me helpless and in deep despair.

My spirit leaves, drifting around and far away

where it becomes caught in a current of immense power -

And only then do I find tranquility.

Our new friends from Bikini Island will be busy with activities on March 7, remembered as Bikini Day. On that day in 1946 they were removed from Bikini Atoll and taken to the island of Kili in advance of a series of nuclear bomb tests. Golden Rule crew member Keith Oney, a Navy veteran member of Veterans For Peace, reports that the Bikinians may go sailing on the Golden Rule again on Bikini Day. 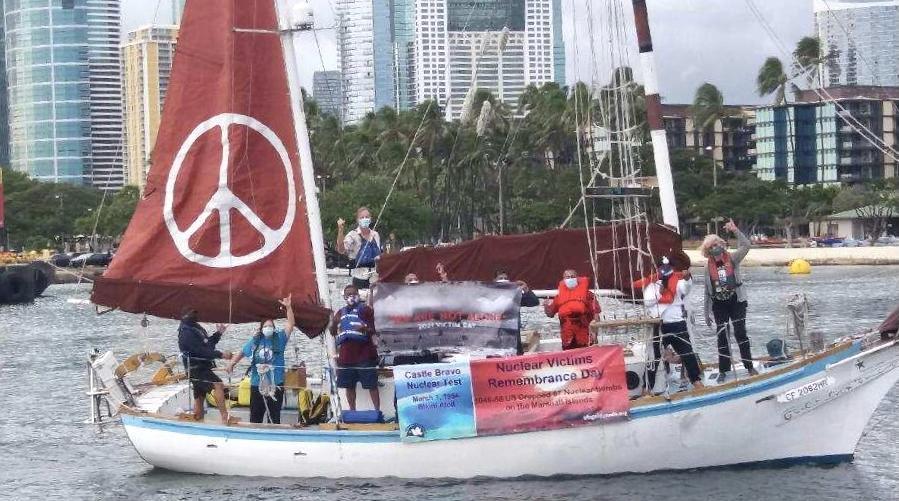 The Marshall Islands was the original destination of the Golden Rule crew of Quaker peace activists in 1958. To learn more about the Golden Rule and her upcoming voyages in the U.S., visit www.vfpgoldenrule.org or contact Helen Jaccard, vfpgoldenruleproject@gmail.com

For a comprehensive article on the Castle Bravo disaster, click here. 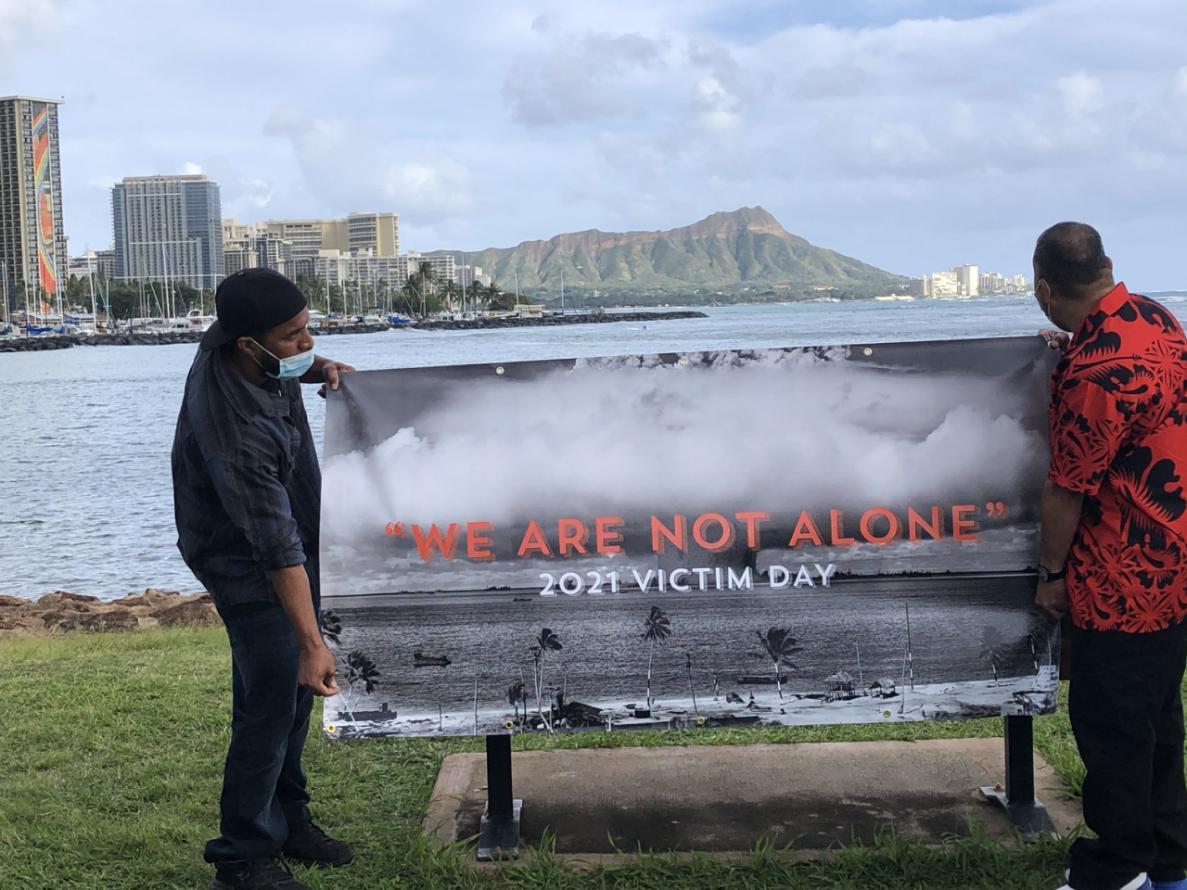 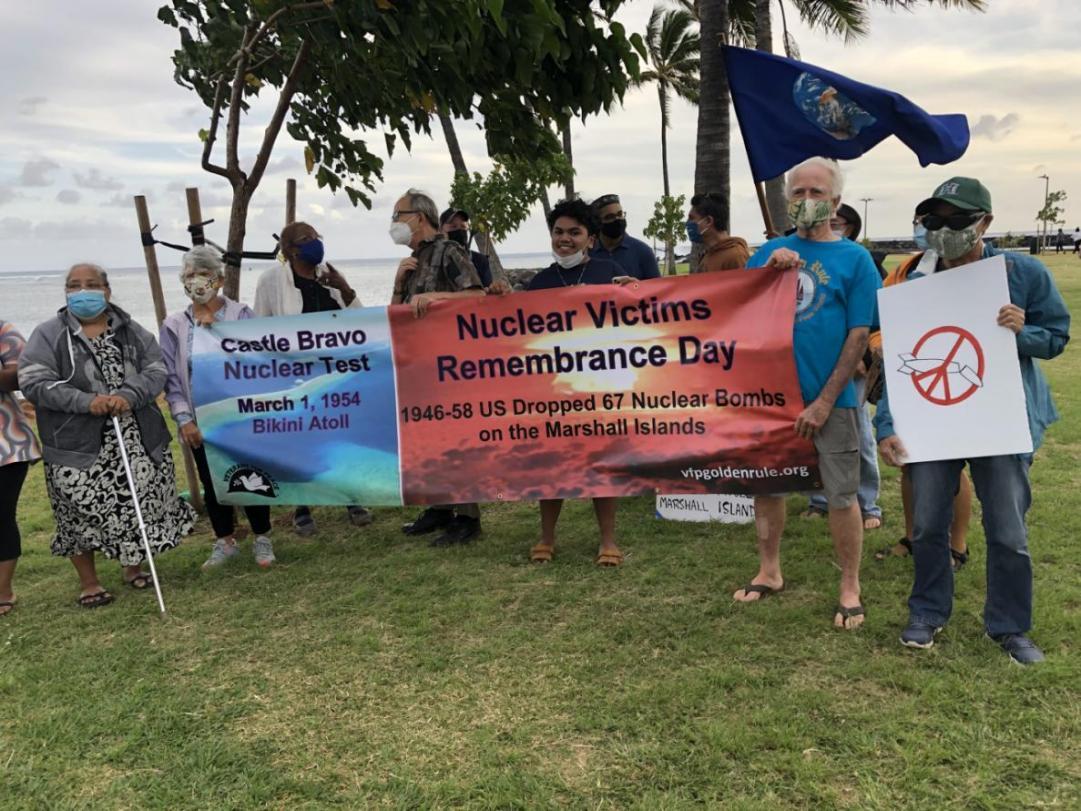 END_OF_DOCUMENT_TOKEN_TO_BE_REPLACED

The jury verdict that former cop and unrepentant sociopath Derek Chauvin is thrice guilty for murdering George Floyd for the nine minutes and 29 seconds of filmed savagery we all saw brings some solace and hope: Finally, a killer cop is declared a killer cop. Alas, one case does not systemic change make. J u stice would be George Floyd still alive. Accou ntability, a heedful first step, is Chauvin being found guilty for why George Floyd isn't still alive.
Read More...
END_OF_DOCUMENT_TOKEN_TO_BE_REPLACED