People did not turn out in record numbers in the midst of a pandemic to vote for a return to normal. They want policy change based on a moral agenda.

A voter wears a face mask and a face shield outside a polling station on Election Day during the 2020 general elections. (Photo: Yegor Aleyev\TASS via Getty Images)

This helped overcome Trump’s gains among households with income above $100,000 from 45 percent in 2016 to just over half in this year’s election.

Many organizations across the country deserve credit for fighting voter suppression and boosting turnout among poor and low-income voters. 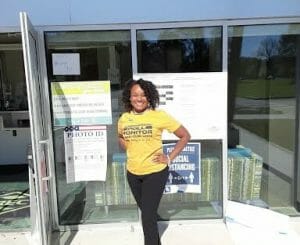 To protect people from intimidation and voter suppression, these nonpartisan poll monitors spread out across 100 polling sites, including in some low-income counties that had not had such monitors for decades.

In the weeks leading up to the election, the Poor People’s Campaign had contacted over 2.3 million poor and low-income people, most of them in battleground states, to encourage them to vote. More than 400,000, or about 20 percent of those contacted, voted early. 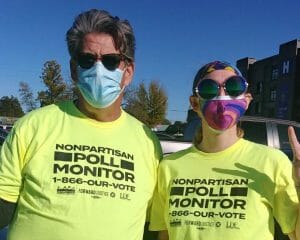 According to the Poor People’s Campaign, poll monitors in their 10 target states successfully advocated for more than 20 polling sites to extend their hours due to late openings or other disruptions to ensure voting access. In others, the monitors worked effectively with elections officials to remove people engaging in voter intimidation (including armed individuals at majority Black voting locations) to protect the safety of voters and the sanctity of the vote.

In key battleground states, such as Michigan, poor and low-income voters showed up in large numbers in support of Biden. According to preliminary data from the Associated Press, 54 percent of Michiganders in households with income of $50,000 or less voted the Biden-Harris ticket. Biden wound up winning that state with 50.6 percent of the vote. 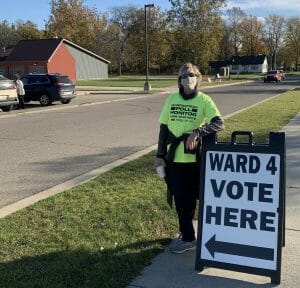 Rev. Dr. Liz Theoharis, co-chair of the Poor People’s Campaign, pointed to the success of Florida’s ballot initiative to raise the minimum wage to $15 as another sign of the power of low-income voters and the broad appeal of a moral policy agenda to reduce poverty and inequality. More Floridians voted to raise the minimum wage than voted for either Biden or Trump, she noted.

Winning that agenda will, of course, take much more than an election. And the Poor People’s Campaign and other progressive organizations are not taking a pause in their fight against the injustices that have been holding our country back since long before 2020.

“People did not turn out in record numbers in the midst of a pandemic to vote for a return to normal,” Poor People’s Campaign co-chair Rev. Dr. William J. Barber II, said in a statement. “We have elected Biden and Harris to use the power of government to lift up those who have been battered by Covid-19, battered by poverty, and battered by years of Republican extremism.”

The Poor People’s Campaign is already working to mobilize their members in 45 states to continue to raise up the key issues facing poor people. This will include caravans in these states on November 16 to demand a just relief package in the face of the Covid health and economic crises.

“We can celebrate now for a moment,” Barber said. “But we must go to work and make sure that people can soon feel that their votes will result in policy change.”

Sarah Anderson directs the Global Economy Project of the Institute for Policy Studies, and is a co-editor of Inequality.org.

Margot Rathke is a Next Leader at the Institute for Policy Studies.

Analysis Shows Richest 10% Now Own Nearly 70% of All Household Wealth in US
More in:
Economy, U.S.
,
Inequality, Election 2020

END_OF_DOCUMENT_TOKEN_TO_BE_REPLACED

The jury verdict that former cop and unrepentant sociopath Derek Chauvin is thrice guilty for murdering George Floyd for the nine minutes and 29 seconds of filmed savagery we all saw brings some solace and hope: Finally, a killer cop is declared a killer cop. Alas, one case does not systemic change make. J u stice would be George Floyd still alive. Accou ntability, a heedful first step, is Chauvin being found guilty for why George Floyd isn't still alive.
Read More...
END_OF_DOCUMENT_TOKEN_TO_BE_REPLACED