SUBSCRIBE DONATE
Published on
Friday, October 16, 2020
by
Fairness and Accuracy In Reporting (FAIR)

Democracy Dies in the Light

The problem is that the media continue to operate as if a normal democratic election is being held in this country, when it clearly is not.

The president has repeatedly made baseless allegations of voter fraud, urged his followers to intimidate voters at the polls, and overruled FDA vaccine safety guidelines in an attempt to push out a Covid vaccine before the election, against the advice of scientific experts. (Photo: Brendan Smialowski / AFP / Getty Images)

The Trump presidency has overturned many norms of democracy, but one of his most dangerous moves is the weaponization of the powers of government against his political opponents. He’s never shied away from talk of it—as the ubiquitous chants of “Lock her up” at his 2016 rallies made clear—but as the 2020 election nears, Trump’s tolerance for democratic checks on his power has eroded dramatically, and he has openly  pressured his cabinet members to use the levers of state power to target his opponents and aid his re-election.

While the occasional news analysis or op-ed correctly labeled this “authoritarian” behavior, bringing out historians and other experts to warn that such moves are “unprecedented” and “an abuse of power” (e.g., New York Times, 10/10/20, Boston Globe, 10/15/20), these takes were largely overshadowed by bizarrely blasé front-page reports framing the story as a spat between Trump and his cabinet. 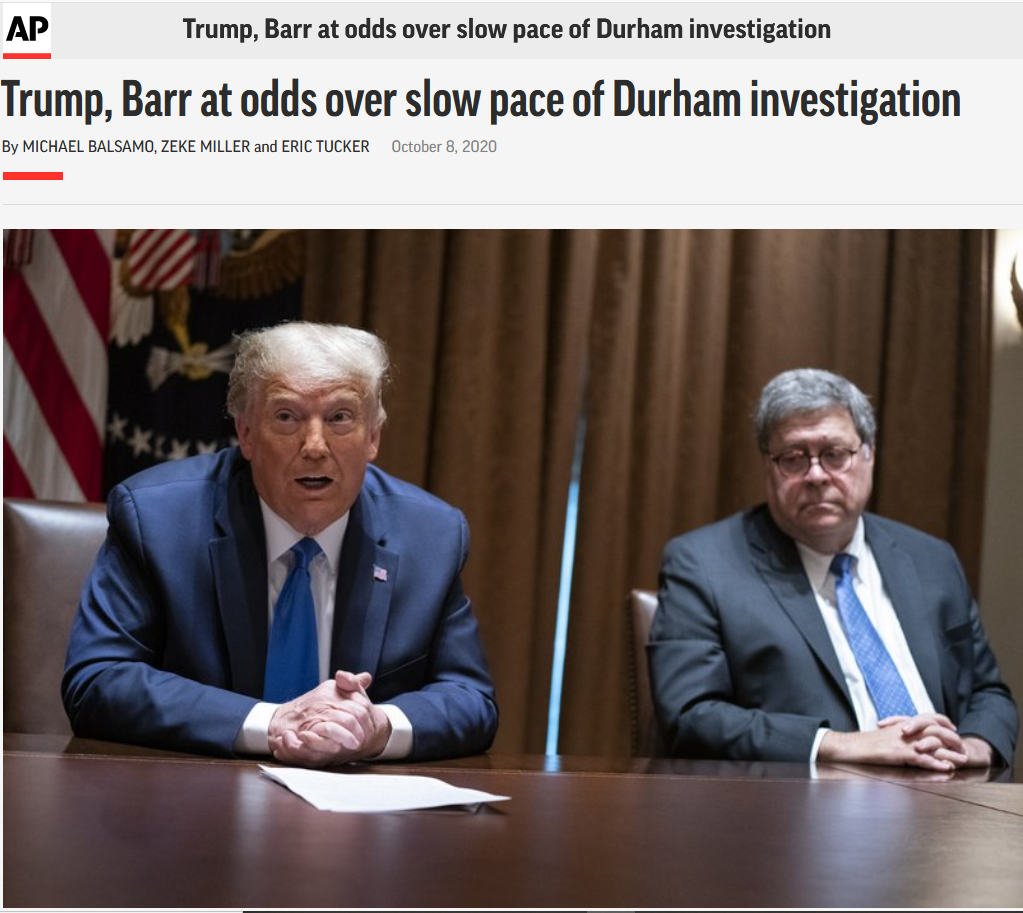 “Trump, Barr at Odds Over Slow Pace of Durham Investigation,” announced an October 8 Associated Press headline. At the Washington Post (10/8/20), the take was similar: “Down in the Polls and Yearning for an October Surprise, Trump Lashes at His Most Loyal Allies.” A Times headline at least gave a nod to the part played in this story by Trump’s actual opponents, but still put the Trump-versus-his-cabinet story center stage (10/8/20): “Trump Lashes Out at His Cabinet With Calls to Indict Political Rivals.”

These pieces offered readers little understanding of the gravity of the problem, with the Times simply noting that Trump “went further” than his usual talk of prosecuting opponents, and the AP blandly explaining that

the tensions between Trump and the attorney general over the fate of the probe underscore the extent to which the president is aggressively trying to use all of the levers of his power to gain ground in an election that has been moving away from him.

The secretary of State said he would make Hillary Clinton’s emails public, handing the president a weapon to attack his political foes as the attorney general resisted his overtures to prosecute them.

But the seriousness of Pompeo’s actions was left almost entirely unexplained. At the very end of the piece, the reporters mention the Hatch Act in the context of Trump’s use of White House grounds for campaign purposes:

The president joked about the agitation he had caused among his critics about how he may have violated the Hatch Act, which prohibits federal employees from engaging in political activities while on the job, by using the White House grounds for political purposes. He said he thought he would do it more.

He pitched the idea of staging events and concerts on the South Lawn every week up through Election Day. He appeared to be half-kidding, but half-intrigued by the idea, aides said.

And this is how the article ended. 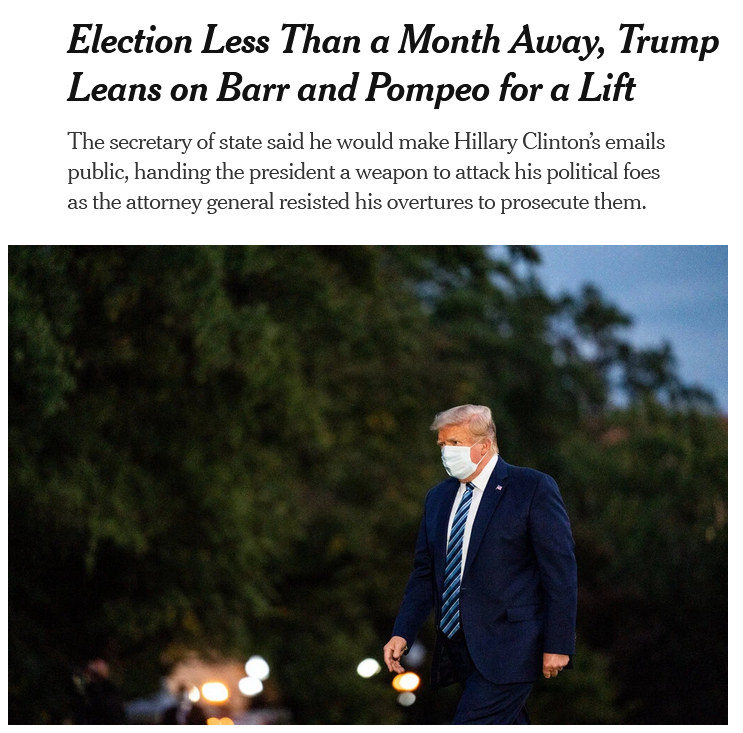 The idea of a sitting government using taxpayer dollars for campaign purposes is considered highly undemocratic, and so we have many laws and institutions in place to prohibit it—including the Hatch Act. As ProPublica/WNYC reported in August (8/12/20), Trump officials had already been cited 13 times for Hatch Act violations by federal investigators with the Office of Special Counsel, with many more investigations underway.

Kellyanne Conway alone was responsible for so many Hatch Act violations that an OSC report (6/13/19) labeled them “egregious, notorious and ongoing,” and went so far as to formally ask Trump to remove her from federal service, declaring that her “actions erode the principal foundation of our democratic system—the rule of law.”

New York Times leadership has repeatedly stated (e.g., Guardian, 11/18/19) that they think the best way to cover Trump is simply to report what he says and does and let readers judge those words and actions. Their idea of hard-hitting reporting is found in passages such as this one, from the October 9 piece:

Neither Mr. Trump nor Mr. Pompeo explained why they would release the emails now, in the final weeks of a hotly contested presidential campaign, given that they could have done so at any point in the past four years. Nor did they explain why they would seek to prove that Mrs. Clinton was too casual with emails containing classified information by releasing emails containing classified information.

At the Washington Post, Trump’s election prompted a new motto, “Democracy Dies in Darkness,” which suggests the same philosophy—that merely exposing anti-democratic actions to the light of publicity will neutralize their threat.

The problem is that the media continue to operate as if a normal democratic election is being held in this country, when it clearly is not (FAIR.org, 9/15/20). The president has repeatedly made baseless allegations of voter fraud, urged his followers to intimidate voters at the polls, and overruled FDA vaccine safety guidelines in an attempt to push out a Covid vaccine before the election, against the advice of scientific experts. He is ramming through a Supreme Court nomination while multiple members of the Senate are infectious with Covid to secure a pro-Trump Court majority that might be his only hope of  staying in power. And now he is pressuring his cabinet members to use levers of state power to influence the election.

Reporting on that pressure as little more than an internecine squabble, and leaving it to readers to piece together the critical context and implications—or burying them on page 20, like the Times analysis, or leaving them to the op-ed page, relegating the value of democracy to a matter of opinion—is not enough. Democracy certainly seems capable of dying in the light, too.

After Four Brutal Years, Biden's Inaugural Was a Healing Affair

Majority of US Voters Across Political Spectrum Back Landmark Pro-Democracy Reform Bill: Poll

We Need To Stop The Fossil Fuel Industry's PR Machine

Rev. John Dear
'I Never Thought I'd Live to See This Day': The Beginning of the End for Nuclear Weapons...

Mark Hertsgaard
'If Only We’re Brave Enough to Be It': Amanda Gorman's Poem Rhymes with Biden’s Climate Agenda...
END_OF_DOCUMENT_TOKEN_TO_BE_REPLACED
Connect With Us

END_OF_DOCUMENT_TOKEN_TO_BE_REPLACED

The veterans of the Great Capitol Insurrection, it seems, are not faring well. Scores of rioters have been arrested, many moronically incriminating themselves en route; investigations are finding the Trump campaign supplied untold millions to the pre-riot rally, often via shell companies and dark money that could constitute illegal money laundering; and weary Americans breathlessly await the spectacle of a Trump impeachment trial for what Chuck Schumer just called inciting "the erection."
Read More...
END_OF_DOCUMENT_TOKEN_TO_BE_REPLACED