SUBSCRIBE DONATE
Published on
Monday, May 18, 2020
by
YES! Magazine

Fossil Fuel Bailouts Are Class War. This Is How We Fight Back

Only a recovery based on principles such as those of the people’s bailout would be able to create a more just society out of the ashes of the coronavirus crisis.

A view of the Marathon Petroleum Corp's Los Angeles Refinery in Carson, California, on April 25, 2020. The price for crude oil plunged into negative territory for the first time in history on April 20 amid the global coronavirus pandemic. (Photo by Robyn Beck / AFP / Getty Images)

Global oil markets are in turmoil, with crude prices at their lowest level in years, even going negative at one point in April. When the U.S. economy is in trouble, the default option for political leadership is to rescue big business. The current coronavirus-induced crisis is no exception. Even as health care workers and other front-line workers get sick and die amid a shortage of basic protective equipment, and the unemployment rate rises above 12%, the government appears to be more keen to bail out the oil and gas industry than to assist regular people.

People’s movements aren’t taking this lying down. They’re organizing in creative ways to pressure the government to put people over profits. They’re resisting this one-sided class war by making it two-sided. More than 300 organizations are calling for an end to fossil fuel bailouts while demanding alternatives such as rent cancellation, worker protections, and a people’s bailout.

If there’s a silver lining that has emerged from this crisis, it is the new mood of defiance in social movements and the willingness to articulate and fight for bold, visionary demands.

Many factors are behind the oil market collapse, and the two the oil industry wants you to hear—the coronavirus-induced drop in demand for oil and the Saudi Arabia-Russia price war—are both partly true. But another major factor was the global oil glut driven by the rapid increase in U.S. oil and gas production, much of it fueled by debt. Even as financial analysts cautioned that the massive debt-fueled expansion of oil and gas was a bubble, the industry went on borrowing, drilling, fracking—and making a few people a lot richer.

Now, fossil fuel companies want the public to bail them out for their own irresponsibility, first by seeking “royalty relief.” By way of background, oil and gas producers lease federal lands and waters for their operations, in exchange of royalties paid to the government. Government finance watchdogs and environmental advocates warn that the royalties paid by the industry are too low. But now the industry wants to pay even less.

To put the industry’s desire for royalty relief in perspective, millions of jobless workers—and many more who work in the informal “gig economy,” or who are undocumented—will be unable to make rental and mortgage payments. A wave of evictions and foreclosures could follow. 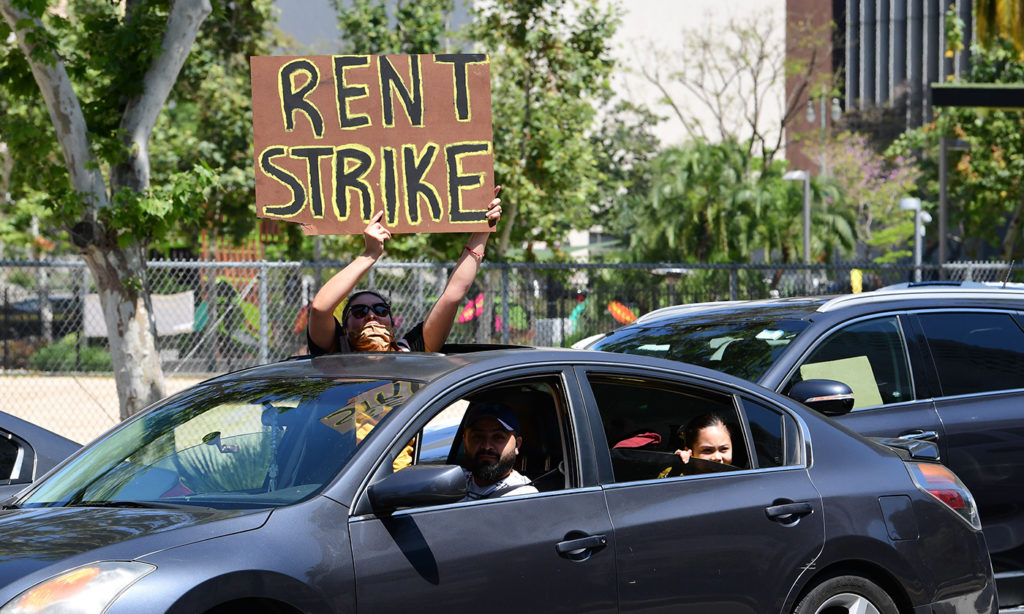 People are organizing for rent cancellation, pressuring local or state governments to put a freeze on rent and mortgage payments, and on evictions and foreclosures. Some of them are also organizing rent strikes, where tenants band together to collectively refuse to pay rent. Rent cancellation demands and rent strikes are gathering momentum nationally and in cities and states, and federal legislation is being proposed for rent and mortgage cancellation as well.

Any royalty relief for the oil and gas industry—effectively a reduction in rent charged for using public property for private gain—should be out of the question until after rental and mortgage relief that not only ensures that people can stay in their homes now, but also protects people from accumulated payments becoming due immediately after the crisis.

Another potential source of government assistance for the oil and gas industry is direct government funds. Warped priorities are on display here, especially considering that a shortage of basic protective equipment for front-line workers and the fact that millions are unemployed or facing homelessness.

Trump first announced on Twitter that he was directing the Treasury and Energy Departments to provide assistance to the oil and gas industry, saying that he wanted “these very important companies and jobs” to be “secured long into the future.”

This rhetoric is also divisive. Obviously, oil and gas workers are hurting, with 51,000 jobs lost in March and more to come. These workers should not have to bear the consequences of their employers’ recklessness. They deserve federal support.

But all jobs and all workers deserve protection. That includes hotel and restaurant workers (disproportionately people of color) facing layoffs. And it includes bus drivers and grocery workers forced to risk their lives by going to work. To put one group of workers on a pedestal while ignoring most workers’ critical need for protection and government support is shameless political pandering. 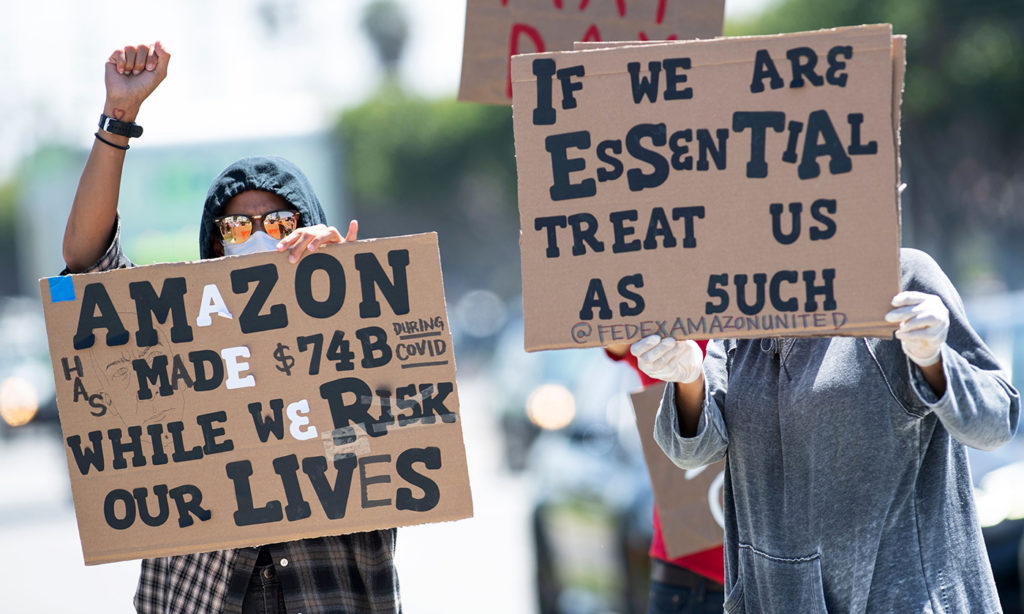 Social movements are demanding that front-line workers are protected first, before any handouts to corporations. There’s a broad call for protecting all essential workers, as well as a specific call to protect essential workers who operate public transit or use transit to get to work. (Full disclosure, I’m one of the key organizers of the transit petition.)

Worker action, too, has gone beyond articulating demands. Front-line retail, distribution, and delivery workers at companies such as Amazon and its Whole Foods subsidiary have staged walkouts and strikes demanding protection and hazard pay. And this is in spite of the country’s lopsided, anti-worker labor laws that make organizing extremely difficult.

As governments display a reckless disregard for human lives and serve corporate profits instead, movements are creating structures for communities to take care of themselves. Mutual aid organizations premised on collective care are springing up in communities across the country and worldwide.

A Bailout for People

The final means by which the fossil fuel industry is seeking a public bailout is through the buyout of distressed corporate debt by the Federal Reserve.

At a time when state and local governments are struggling to keep up with rising human needs and constrained resources, social movements are calling for a people’s bailout. Such a response to the coronavirus crisis centers people, especially the Black, brown, Indigenous, and low-wealth people who are most affected by this crisis—and all crises. 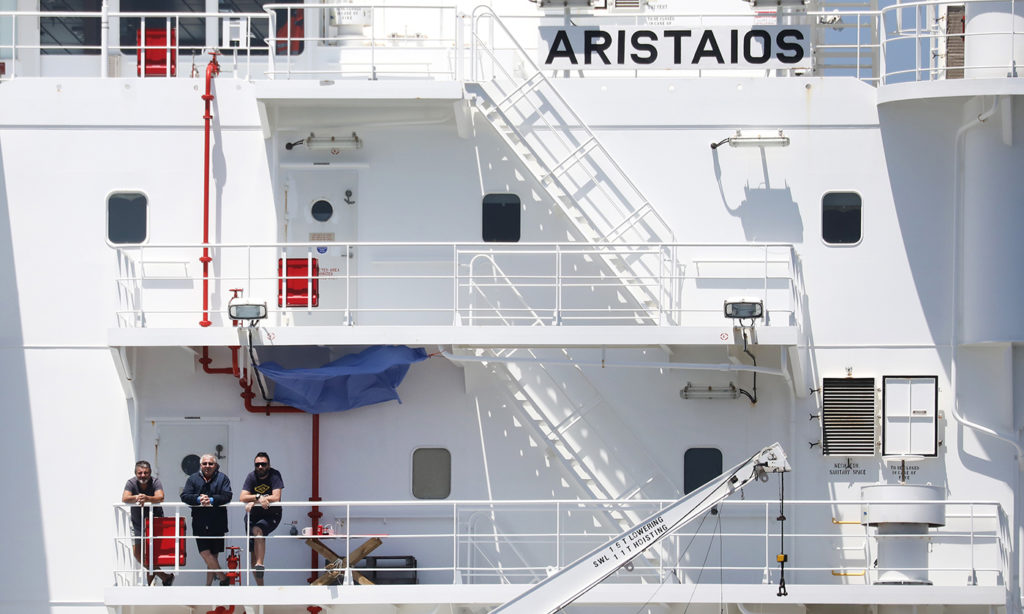 The demand for a people’s bailout sees the response to the coronavirus crisis as an opportunity, not to merely restore the status quo, but to build a better and more just world. It is based on five core principles, worth quoting in their entirety:

Supporters are clear that “returning to normal” would be woefully inadequate. They say it’s unacceptable to return to the profoundly unjust and unequal status quo that has resulted in the crisis being so horrific to begin with.

Only a recovery based on principles such as those of the people’s bailout would be able to create a more just society out of the ashes of the coronavirus crisis.

Basav Sen is the cli­mate jus­tice project direc­tor at the Institute for Policy Studies (IPS) and writes on the inter­sec­tions of cli­mate change and social and eco­nom­ic jus­tice. Pri­or to join­ing IPS, Basav worked for 11 years as a cam­paign researcher for the Unit­ed Food and Com­mer­cial Workers.

Joe Dinkin
The Choice for Democrats in Congress: Go Big or Go Home
END_OF_DOCUMENT_TOKEN_TO_BE_REPLACED
Connect With Us

END_OF_DOCUMENT_TOKEN_TO_BE_REPLACED

All Senate Dems just voted for a $1.9 trillion COVID relief package; all Repubs voted against it because with millions hungry or unemployed or struggling through an epidemic why would they help anybody when not one "gives a flying fuck" about Americans? Besides, they're busy nursing their white grievance and making a video blasting all the good things the bill will do and filming themselves reading Dr. Seuss while yelling he's been "outlawed," which he isn't. Prine: "Some humans ain't human."
Read More...
END_OF_DOCUMENT_TOKEN_TO_BE_REPLACED