SUBSCRIBE DONATE
Published on
Wednesday, October 23, 2019
by
Fairness and Accuracy In Reporting (FAIR)

Despite what corporate media would have us believe, we really don’t need to choose between enduring deliberate blackouts from for-profit utilities or hazarding deadly fires and widespread power shortages.

While California’s wildfires are a part of the area’s natural state, the size and intensity of the seasonal blazes have increased for decades under worsening climate change. (Photo: LA Times/Screenshot)

FAIR has documented a variety of persistent systemic failures in corporate media coverage of climate change over the years. When corporate media aren’t busy denying the existence of a climate emergency, providing false “balance” by amplifying the perspectives of fringe climate deniers, or downplaying climate change’s contributions to natural disasters, they’re minimizing coverage of climate change and initiatives to combat it. Even their coverage of extreme weather phenomena—which have the most obvious connection to the ongoing climate crisis—fails to make the connection.

Most recently, corporate media refused to discuss climate change as a factor in this year’s major blackouts in California and New York, described by for-profit utilities as a response to wildfires and extreme heat waves. 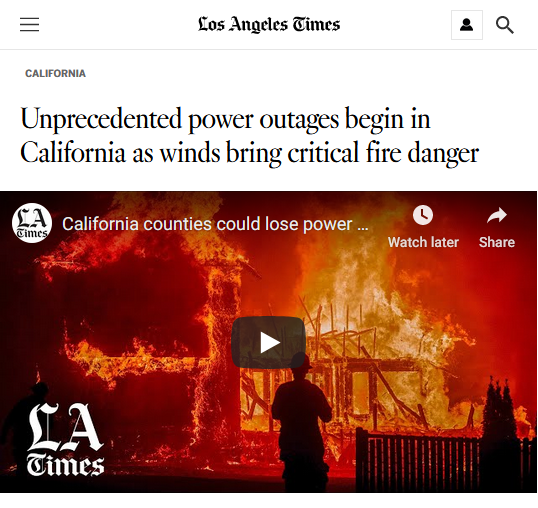 This month, millions of California homes and businesses lost power after Pacific Gas & Electric (PG&E), the largest for-profit utility in the US, shut off 738,000 customer accounts in a “public safety power shut-off” (PSPS), to prevent further wildfires like the Camp Fire breakout that devastated Paradise, California, last year. That wildfire, the worst in California’s history, killed at least 86 people and destroyed 19,000 homes and businesses across 150,000 acres—after PG&E delayed upgrading a century-old voltage line that sparked the conflagration (New York Times, 2/28/19). Yet corporate media didn’t seem to think climate change was an important factor to mention in their coverage of PG&E’s blackouts.

While California’s wildfires are a part of the area’s natural state, the size and intensity of the seasonal blazes have increased for decades under worsening climate change. The amount of land burned in the state has increased fivefold since the 1970s, with 15 of the 20 largest fires having occurred since 2000 (National Geographic, 10/10/19). The Con Edison blackouts in New York, allegedly from overstrained power grids, are also an inevitable result of the climate crisis, with air conditioner usage increasing the burden on electrical grids as greenhouse-driven heat waves produce record-breaking temperatures (New York Times, 2/6/19; Newsweek, 10/9/19).

It’s clear that the Wall Street Journal (10/10/19) is aware of the connection between climate change and the “deadly infernos” PG&E claims to be trying to prevent with the shutoff, though the only reference to climate change in the article is in a photo caption buried at the very end. The Journal’s “PG&E’s Big Blackout Is Only the Beginning” (10/12/19) described PG&E’s intentional blackout to millions of Californians as a “new reality,” without connecting this “new reality” to worsening climate change, even as it described the “crisis” involving “power lines and wind-whipped wildfires” across the globe in Australia. Another Journal (10/13/19) piece refused to name climate change as the factor that linked the “devastating wildfires that periodically sweep through Northern California” and the first-ever “weather-related shut-off of such size and duration.”

The Los Angeles Times (10/10/19) has occasionally made the connection between “killer wildfires” and climate change. But in other articles, it avoided making the link between the rising frequency and intensity of seasonal blazes to climate disruption—preferring more localized and isolated causes, like “utilities malfunctions,” or bringing on sources who claim that “95% of all wildfires are human-caused” (defined as “activities that could produce a spark,” like “mowing the lawn,” rather than anthropogenic climate change). 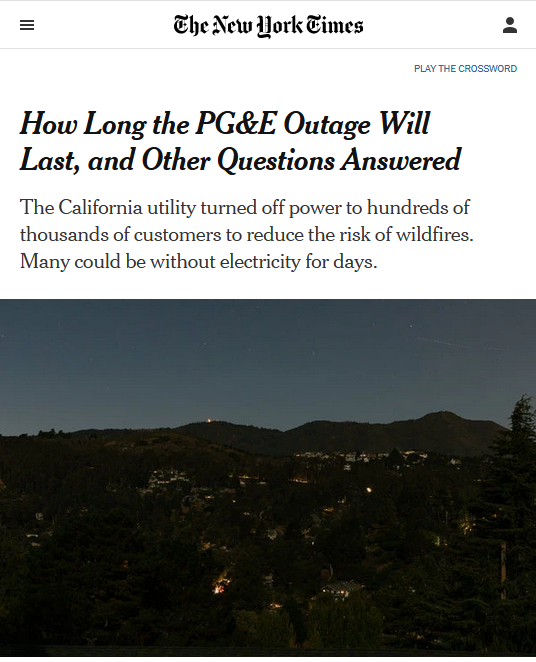 The New York Times’ Thomas Fuller (10/10/19) didn’t seem to think California’s “fire problem” was worth connecting to the climate crisis, since he never mentioned it in his “personal reflections,” or in his updates for readers, while he was eating instant ramen noodles in his home office during the power outage. The Times’ energy reporter, Ivan Penn (10/10/19), also didn’t seem to think climate change factored as an explanation for the “strong winds and dry conditions” that have been “implicated in several major California wildfires started by utility equipment,” in another article that purported to answer questions about the PG&E outage.

To be fair, some reports have provided excellent journalism that explains the PG&E blackouts in terms of the perverse rationales of dog-eat-dog capitalism. The New York Times (3/18/19) and the Wall Street Journal (7/10/19) reported on PG&E intentionally avoiding proper maintenance and upgrades of faulty equipment despite concerns raised by its own employees, prioritizing profits for shareholders over customers and public safety. The Intercept (10/11/19) and In These Times (10/10/19) covered how PG&E preferred to spend money on lobbyists and PR specialists, and filed for bankruptcy protection from legal liability to avoid paying out hundreds of lawsuits to victims from wildfires resulting from PG&E’s equipment, prioritized paying out stock dividends to shareholders and spending money earmarked for safety upgrades for its high-voltage transmission line on large raises and bonuses for executives instead. 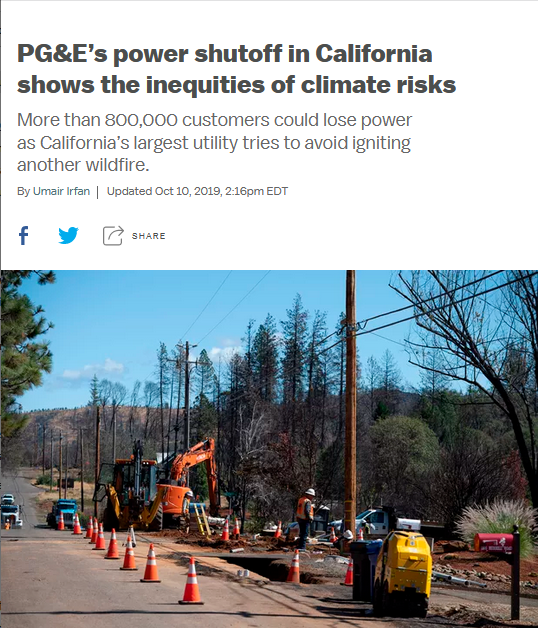 Vox (10/10/19) articulated the rationale behind PG&E’s deliberate blackout quite well in its report on why it’s good business sense for investor-owned utilities to ravage the poor instead of upgrading decaying infrastructure:

However, part of the utility’s decision to conduct a PSPS also stems from policy decisions, explained Travis Kavulla, the former president of the National Association of Regulatory Utility Commissioners. He explained that PG&E essentially sells a product, electricity, at a government-set price. “And when that price is not worth the wildfire risk associated with providing service, or when the price does not support the investment necessary to make the service safe, it makes complete sense that they would flip the ‘off’ switch to particular sets of consumers,” Kavulla wrote in an email….

But if the company takes on more aggressive maintenance and prevention work, those costs could end up being passed to their customers. The rising utility costs would again hurt the poorest the most.

But unless one carefully reads every single report by a given media outlet, one probably won’t receive an explanation for why what CNN calls “risky weather conditions” are occurring with greater frequency and intensity. Most journalists fail to consistently connect isolated weather events to a broader analysis of climate change driven by human activity.

This is emblematic of corporate media’s tendency to treat an existential threat as a far-off concern, with only an occasional connection to the weather, and not at the forefront of the news as a present reality (FAIR.org, 12/2/13). As FAIR’s Jim Naureckas has often pointed out, when one understands the conceptual distinction between climate and weather, the reason it’s easy (and correct) to attribute particular weather events to climate change is that “every weather event in the modern world is attributable to climate change” (FAIR.org, 7/2/12, 11/14/13). 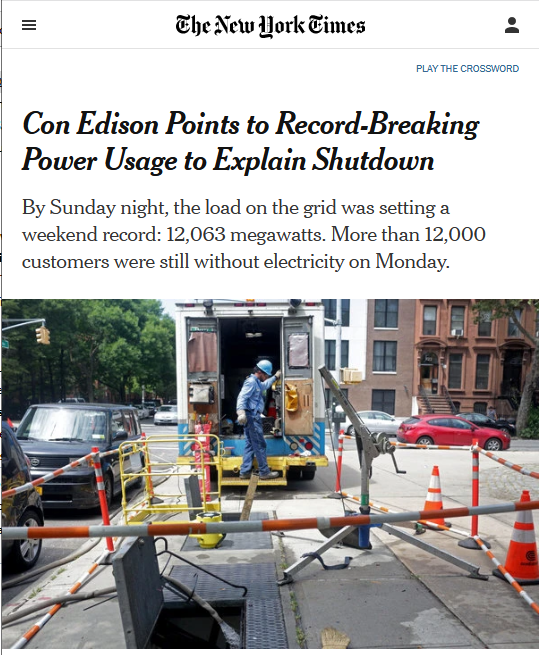 In July, investor-owned New York utility Con Edison had its own deliberate outage in Brooklyn—to prevent a wider blackout during a deadly heatwave—the weekend after a burning 13,000-volt cable cut off power to 73,000 customer accounts, in Manhattan. The New York Times never connected both major blackouts to the climate crisis; instead, the Times (7/21/19, 7/22/19) uncritically echoed Con Ed’s line about “record-high power demand” and the “load on the grid,” even as it reported on the burning cables and “sweltering heat wave” causing Con Ed’s customers to turn up their air conditioners.

The Times did this despite these blackouts being an obvious sign of the climate crisis, as July 2019 was the hottest month on record, following a continuous trend of record-breaking global temperatures. (The Times also left out that some of the areas where Con Ed was shutting off power, like Canarsie and Flatlands, were among Brooklyn’s most diverse and low-income neighborhoods—Grist, 7/23/19). Why are intense heat waves occurring more frequently, and why can’t the power grid handle increased power usage? One wouldn’t get answers to these questions from the Times, as increased strains on power grids are an inevitable result of climate inaction, and constant refusals to upgrade the US’s consistently terrible infrastructure due to decades of austerity-driven politics with considerable help from corporate media (FAIR.org, 10/27/17, 2/22/19, 7/29/19).

The blackouts in California and New York highlight the disparity in economic impact and the inability of market solutions to combat the climate crisis, as the majority of Americans struggling paycheck to paycheck can’t afford to buy the security of backup power in the form of private generators and solar panels. They highlight the need for a Green New Deal to prevent racist blackouts that ravage the poor for profits (In These Times, 8/22/19; FAIR.org, 9/6/19).

Just as the human contribution to climate change can magnify disasters, corporate media coverage often bolsters public confusion and ignorance about the causes of climate disruptions like these utility blackouts, and serves to hinder action that doesn’t depend on investors profiting off the current climate status quo (FAIR.org, 10/16/19). Despite what corporate media would have us believe, we really don’t need to choose between enduring deliberate blackouts from for-profit utilities or hazarding deadly fires and widespread power shortages.

Benjamin Dangl
Bibles at the Barricades: How the Right Seized Power in Bolivia
END_OF_DOCUMENT_TOKEN_TO_BE_REPLACED
Connect With Us

END_OF_DOCUMENT_TOKEN_TO_BE_REPLACED

As an impeached dumpster fire raves - Twitter was mean to him! Masks mean "social control"! - his abysmal failures have seen us not just hit the grisly milestone of 100,000 deaths but soar right past it: Thursday's toll was 102,794 and rising fast. In response, the Lincoln Project's harrowing new ad savages his "great job" claims with fast-accruing body bags, a chilling echo-chamber of his predicted "close to zero" deaths, and an urgent message: “100,000 dead Americans. One wrong president.”
Read More...
END_OF_DOCUMENT_TOKEN_TO_BE_REPLACED