Our strategy is simple: mobilize millions of Americans across this country to stand up and demand that politicians choose a side, the American people or the pharmaceutical corporations.

Our coalition is still growing, but already is made up of organizations representing tens of millions of people united around four principles that guide our efforts to smash pharmaceutical corporations’ monopoly power. (Photo: AP)

Across 34 states today, the American people had one unified message for their elected representatives in Washington, D.C.: lower drug prices now.

We are proud that Social Security Works is a founding member of a new broad-based coalition that is dedicated to breaking the stranglehold pharmaceutical corporations have on U.S. policymakers. Our campaign has a simple name, Lower Drug Prices Now, and a simple purpose, to do just what our name says. Our strategy is also simple: to mobilize millions of Americans across this country to stand up and demand that politicians choose a side, the American people or the pharmaceutical corporations.

Our coalition is still growing, but already is made up of organizations representing tens of millions of people united around four principles that guide our efforts to smash pharmaceutical corporations’ monopoly power:

Our coalition has come together to fill the gap between what the people want and demand of their elected representatives and what politicians are serving up in terms of addressing (or not addressing) high drug prices. The time for tinkering around the edges is over. Alongside the 51 events in states around the country today, Lower Drug Prices Now released new polling from Data for Progress that demonstrates just how popular our ideas are. The polling reveals that Republicans, Independents and Democrats all agree about the need for structural changes that eliminate corporate monopoly power. 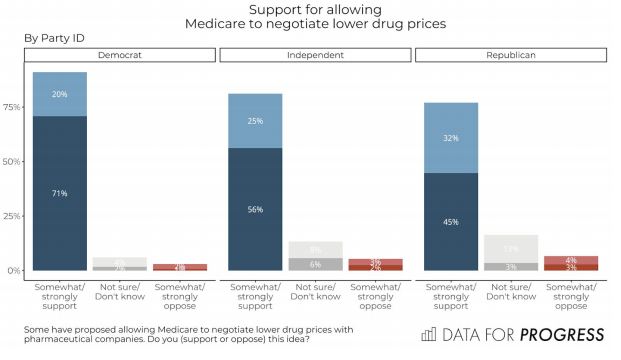 As the last two bullets show, allowing Medicare to negotiate prices is literally the least we can do. The American people want much bolder, transformational change. And support for bold proposals holds even after being forced to listen to industry propaganda. The polling looked at levels of support for allowing competition from generic pharmaceuticals to help lower drug prices versus anchoring the price of drugs to those in other countries. 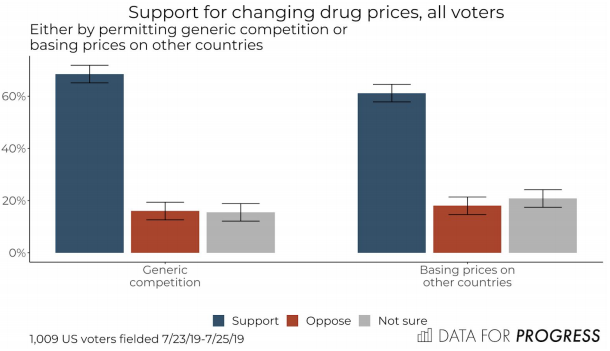 The power of the pharmaceutical industry is entrenched in our political system. The only way we’re going to end their greed is with organized people power. The polling is clear: As polarized as we are over many issues, we are not polarized about drug prices. Americans across the political spectrum want, and need, lower drug prices. Our coalition is going to mobilize millions of people across the country to demand our politicians represent our will and take on the greed of the pharmaceutical industry to lower drug prices now—lives truly depend on their action.

This article was produced by Economy for All, a project of the Independent Media Institute.

END_OF_DOCUMENT_TOKEN_TO_BE_REPLACED

This week brought harrowing proof of the racism still befouling American "criminal justice": Long after the fact, we find Colorado police had no reason to stop, never mind kill, Elijah McClain; a New York grand jury declined to bring charges against seven cops for killing Daniel Prude for being mentally ill; Ahmaud Arbery's mother sued three thugs who killed her son for jogging while black and the cops who covered it up. Each time, activists say, "The system did exactly what it was meant to do.”
Read More...
END_OF_DOCUMENT_TOKEN_TO_BE_REPLACED